The Microfoundations of (Non-)Redistribution in Colombia 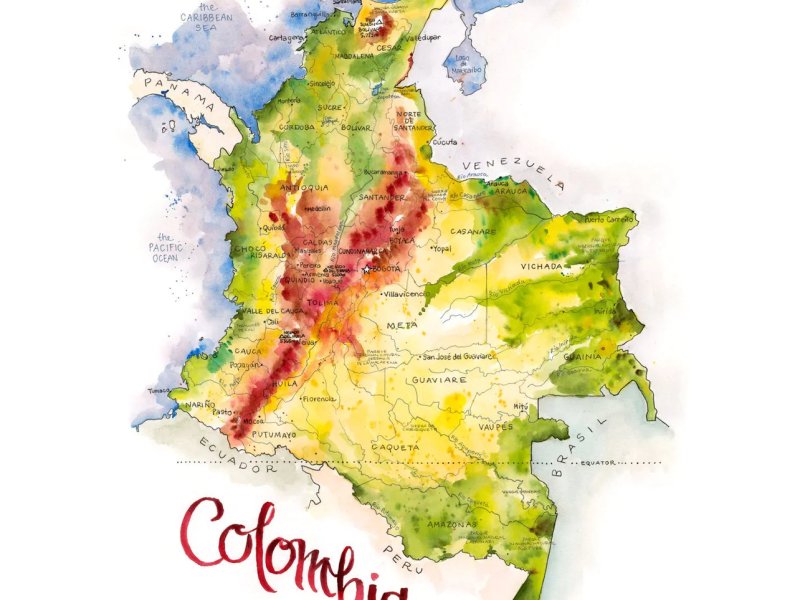 Why do some democracies remain so highly unequal? Existing political science literature equips us with surprisingly few theoretical tools to understand, much less answer, this incredibly important question. Existing foundational theories suggest that given a certain period of time, democracies should eventually redistribute income or wealth and become more egalitarian. Yet, there are a substantial number of countries that have experienced democratic rule for decades and remain virtually as unequal as they did before they democratized. Furthermore, current global trends suggest, generally speaking, inequality is on the rise in many democracies throughout the world.

The Case of Colombia

Colombia is a typical case from a large pool of countries where long periods of democratic rule have brought little in the way of redistributive social reform nor alleviation of income inequality. Remarkably, in the most unequal region of the world – Latin America – Colombia has one of the most successful track records of democracy yet remains one of its most unequal countries. Ranking countries by their 2018 income Gini,[1] Colombia possesses the third-highest income inequality in the world – only Angola and Brazil have higher. Yet, a quick look at the countries around Colombia, even those from outside Latin America – such as Angola, Bulgaria, Iran, the Philippines, and Turkey – have experienced decidedly poorer records of democratic rule. Besides a brief period of autocratic rule during a civil war in the 1950s, Colombia has been fully democratic since 1930. Indeed, outside of a couple of periods where substantive redistributive reforms were pursued – most notably in the mid-1930s under Alfonso López Pumarejo and in the early 1990s under César Gaviria – Colombia’s record of social reform and redistribution is lackluster. In other words, why has nearly a century of democracy in Colombia brought such little redistribution?

The Microfoundations of Democratic Redistribution

Although a full discussion of the ‘social conflict’ and ‘power resources’ theories is well outside the scope of this blog post, understanding their differences, and most importantly, similarities will help ground the analysis presented here. Social conflict theory suggests that democracy is inherently redistributive – as long as suffrage approaches universal, the lower and middle classes should be able to use their power in numbers to elect politicians and parties that favor redistributing wealth, leading to less inequality over time. On the other hand, power resources theory argues that democracy opens the door to allow for the organization of the working class – particularly through the rise of organized labor and left-wing parties – to shift the balance of power towards the economically underprivileged, paving the way towards social reforms and greater redistribution.

Despite these two theories sharing many theoretical differences in the causal mechanisms that link democracy and redistribution, they both fundamentally assume that individuals from certain income groups or socioeconomic classes have predictable and distinct political behavior towards redistribution. That is, both theories put forth strong micro-level assumptions that individuals from lower- and working-classes are likely to believe that the government should implement redistributive policies, as well as identify or vote for politicians or political parties that advance political ideologies congruent with redistribution. The inverse is also true: individuals with high incomes or those from professional or upper classes are likely to be against the government implementing redistributive policies, and likely to identify or vote for economically conservative politicians or political parties.

Another way to look at this is that both theories make a number of macro-level predictions (i.e. those countries with strong democratic institutions, or strong democratic working-class organizations, will possess lower inequality than those without), but also put forth some microfoundations of redistribution. That is, in order for the outcomes they theorize will occur to come to fruition, individuals have to behave in a certain way. And if individuals are not behaving in a certain fashion – i.e. individuals from certain socioeconomic groups have predictable demands and political ideologies – we should refine these theories to put forth different assumptions, as well as doubt that the outcomes these theories predict are as likely to materialize.

Testing the Microfoundations of Redistribution

The most common approach to testing these theories empirically is to simply analyze whether strong democratic institutions or working-class organizations are associated with redistributive outcomes across a large sample of countries. In other parts of my research, as well as in many others’ work, this approach has yielded somewhat mixed results. However, one major issue with testing theories in this manner is that inequality is an exceptionally complex phenomenon; there exist countless economic, political, or social processes that may be affecting inequality that could not possibly be accounted for in statistical models. In turn, I employ what is sometimes referred to as a ‘hoop test.’ A hoop test applies a hard test on whether the intermediary process of a theory – in this case, whether income levels or class affect the political behavior of individuals with respect to their redistributive demands – in order to assess its validity. For example, it is highly unlikely that democracy will be inherently redistributive if the more numerous lower and working classes do not actually have strong redistributive demands or align themselves with political parties that stress redistribution as their main political goals.

In order to test whether income or class has predictable effects on redistributive demands or political behavior, I draw on a bevy of public opinion and household survey data. First, I gathered 6 waves of public opinion survey data from the Latin American Public Opinion Project (LAPOP) – each wave consists of an annual probabilistic-based sample of 1000-2000 Colombians. Then, I draw from an entirely different source of public opinion data – the Encuesta Longitudinal Colombiana de la Universidad de Los Andes (ECLA) – which is a household panel dataset that was conducted on 10,000 Colombian households. Both surveys contain a set of remarkably similar questions regarding attitudes towards redistribution and political ideology, as well as a set of questions that allow for the capture of income level and class, among other demographic factors.

More specifically, I focus my attention on three types of political behavior: 1) the degree to which respondents support redistribution,[2] 2) where respondents self-identify on a traditional left-right political ideology scale, and 3) whether the respondent supports a left-wing or center-left political party or not.[3] I then statistically test whether a respondent’s income or socioeconomic class has any effect on the three aforementioned types of political behavior, while also controlling for a number of other demographic and political factors.[4]

Figure 1: Support for Redistribution by Class

Simply stated, I find no evidence that lower- or working-class individuals are more likely to hold strong redistributive demands, identify themselves as politically left-wing, nor express support for left-wing political parties. Nearly all regressions I ran brought back null results – that is, there were no clear empirical relationships between income level, class, and redistributive political behavior. As Figure 1 shows,[5] for example, the distribution of those who support redistribution is nearly identical among both the working and professional classes. Most Colombians believe that the government should implement policies that redistribute income, regardless of which class they are situated in. The same general pattern exists in respect to income – there is little difference in support for redistribution among those that earn above the

Perhaps these results are simply an artifact of a certain time period? Both LAPOP and ECLA rely on data that was collected from 2008-2013. If we go back further in time, is there more evidence to support the redistributive microfoundations of social conflict and power resource theories? I relied on the Roper Center’s rather extensive historical archives to analyze public opinion data from Colombia dating back to the 1960s. Although these polls have limitations in terms of the analysis I am able to conduct compared to the previous sources of data, most historical polls in the Roper Center’s historical archives on Colombia did at the very least require interviewers to code the socioeconomic class of the respondent. Relying on multiple polls that were designed to gauge support for past presidents and political candidates, I once again found no evidence that individuals from the lower- or working classes, or those with low incomes, were more likely to support left-wing political candidates. Indeed, on the few occasions where there was a clear relationship between class, income, and political candidates, those on the lower end of the spectrum or class or income were more likely to support conservative candidates.

Among many other theoretical claims, my book project argues that individual political behavior, whether driven by income or class, is unlikely to be at the root of larger processes of democratic redistribution. Rather, I argue that political parties and party systems are critical to determining whether, and how, democracy affects redistribution. Other literature has certainly shown a great deal of evidence that redistributive demands exist among the populace – indeed, Figure 1 confirms these findings – yet we should not assume these demands are concentrated among the working class or poor. I take a more structural approach, arguing that redistributive demands are present, but if they are not channeled effectively – which is a function of the structure and degree of institutionalization or stability of party systems – into the formal political system and turned into redistributive policy by politicians, they are unlikely to be converted into redistributive policy and inequality is unlikely to fundamentally change.

In the case of Colombia, two oligarchic parties historically dominated the political system, forcing the redistributive demands of the general population into highly heterogeneous parties where factionalism broke down the potential for the advance of redistributive policies and elites captured the political process to protect their economic interests. To understand how these phenomena have shaped a lack of redistribution throughout Colombia’s democratic history, I have conducted extensive archival work based on personal correspondence documents between party leaders and politicians in the two traditional parties over decades, providing a window into the inner workings of the parties and why redistributive demands have often been actively stunted. The traditional two-party system has since broken down in contemporary Colombia, but the current political parties are weak and possess little organizational capacity to channel redistributive demands into policy, and the political landscape is dominated by populist and personalistic politicians that may have little interest in advancing redistributive social policy. While a multi-party system with strongly organized parties may still develop in the future, Colombia has yet to experience a period where political parties have built strong ties with the electorate and managed to provide the institutional linkages to advance the widespread and strong redistributive demands that exist in Colombian society.

Vincent Mauro is a 2021 Kohut Fellow and Ph.D. candidate in the Department of Government at Cornell University. He studies comparative politics and the politics of inequality. His book project, Party Systems and Democratic Redistribution, investigates how party systems shape paths of social reform, redistribution, and economic inequality in Latin America and beyond. His research has been published or forthcoming in Comparative Politics and Latin American Research Review. For more information about his research, visit vincentrinomauro.com.

[1] The Gini coefficient is a measure of dispersion that measures the relative degree of distance between the highest and lowest earners in any given population. This citation is relying on World Bank Gini estimates. There is substantial variation depending on the source of cross-national Gini data, as well as a large array of countries are missing from this data.

[3] The question asks if they do support a political party, which party. I code political parties as belonging to either the left or center-left based on my own coding of the ideological position of the Colombian parties.

[4] I measure income by self-reported monthly income, then code all those with an income lower than the country monthly average (approximately 600,000 Colombian pesos in 2012 based on official government statistics), as social conflict theory argues that individuals below the average income of any given population should possess strong redistributive demands. I measure class based on the type of occupation they hold.

[5] The question is scaled from 1 (strongly disagree) to 7 (strongly agree).