Presidential Transition in the Polls 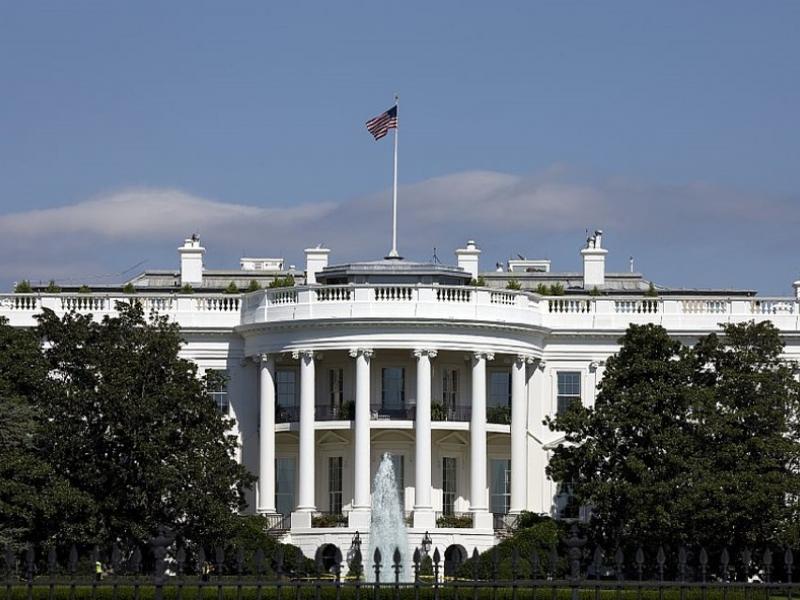 The weeks between election and inauguration usually represent a honeymoon period in which the president-elect's decisions are given good reviews by the American people. But this year is different. The first polls on Trump's transition have appeared, and so far, public opinion is decidedly negative. A recent Pew poll found that just 41% of the country approved of the job Trump was doing in explaining his policies and plans for the future to Americans. In 2008, 72% approved of the job Obama was doing. Pew also asked whether respondents approved of Trump's cabinet choices and other high level appointments, a question that was also asked about the last four presidents. Just 40% of Americans approve of Trump's choices, lower than the previous low of 58% for George W. Bush, and far below Obama's 71%. A Bloomberg poll showed slightly higher approval, with 51% saying they approve of most of the people Trump has chosen to serve in his cabinet. Over the next few weeks, more polls will be released showing attitudes about the transition. Comparing new numbers to historical polls will provide the necessary context to see where President-elect Trump is typical, and where he is an outlier.

Handling of the transition

The last three times that the country has undergone a transition from one presidency to another, the public has positively rated the president-elect's management of that handoff. Obama's ratings were the highest among the last three presidents to take office, reflecting his strong showing in the popular vote. The first rating of Trump's handling of the transition, from a December Gallup poll, found approval at just 48%.

While the majority in the last four transitions have approved of cabinet choices, Americans haven't given stellar ratings to these appointments. When asked to rate cabinet appointments in recent new administrations, the public has rarely called the president-elect's selections ‚Äúoutstanding." Majorities rated Clinton and G. W. Bush's choices average or less, while Obama's picks were rated a bit higher. Earlier polling on Eisenhower, Kennedy and Nixon used a three-way split with the ambiguous ‚Äúfair" as the middle category, making direct comparisons impossible, but public opinion seems to have been a bit more favorable in those years. 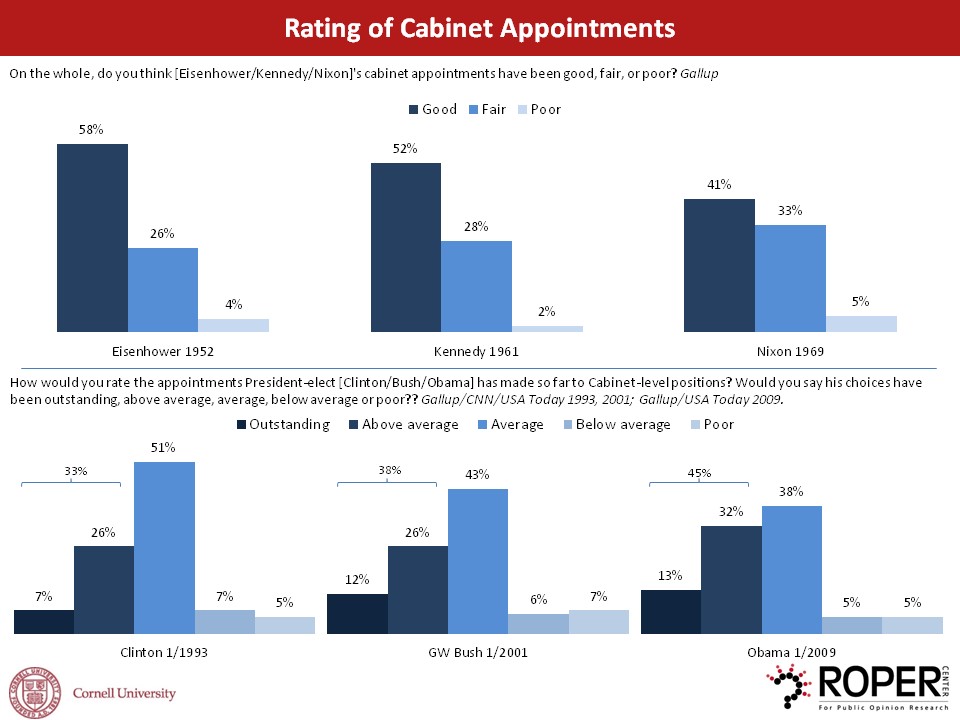 Die-hard political junkies may appreciate having Cabinet appointments to dissect after the end of an election, but after most elections, many Americans don't pay attention. Only about one in four in 1992 could name even a single Cabinet member appointed by Bill Clinton. The proportion of Americans able to recall a specific name of a cabinet choice was higher for George W. Bush's appointments and higher still for Barack Obama's. These increases, however, appeared to be driven by two particular individuals: Colin Powell and Hillary Clinton. Trump's unconventional appointments might drive higher name recognition. 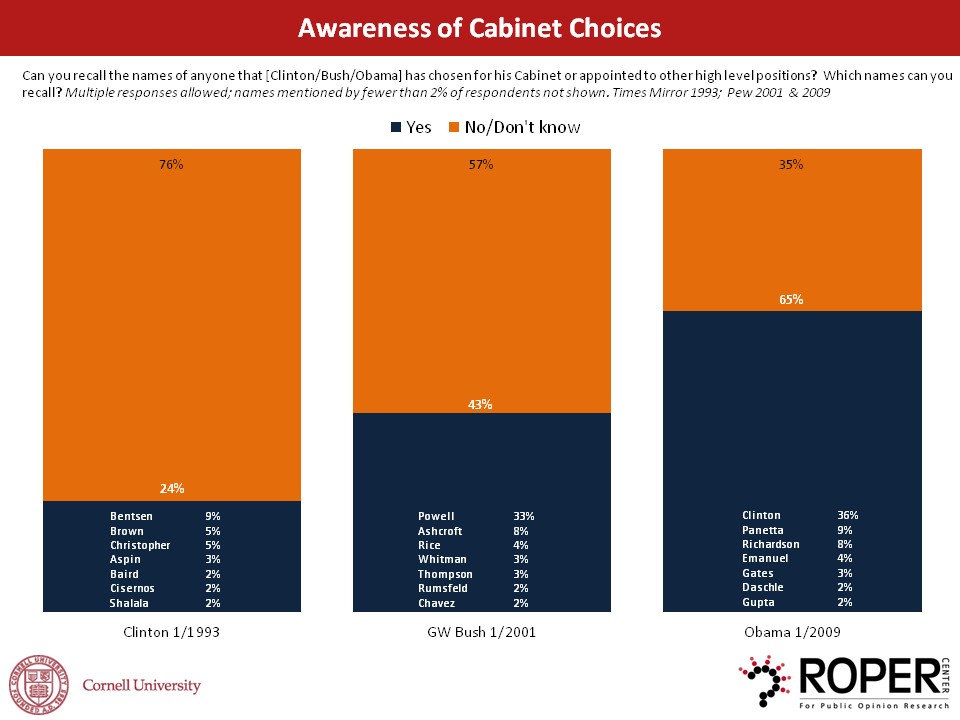 Americans have long supported bipartisanship in Cabinet appointments - within limits. Seventy percent in a 1952 Gallup polls said they wanted Eisenhower to appoint ‚Äúone or two" Democrats to his Cabinet. He did, Labor Secretary Martin Patrick Durkin. In 1960, 62% thought Kennedy should choose one or two Republicans, which he did as well: C. Douglas Dillon as treasury secretary and moderate Robert McNamara as defense secretary. This question was not asked for over two decades, during which Presidents-elect Nixon and George H.W. Bush had no Cabinet members from the opposing party, and Carter, Reagan and Clinton had one each. An overwhelming 86% in an ABC News/Washington Post poll thought George W. Bush should appoint some Democrats after succeeding in the electoral college, but not the popular vote; he appointed Norman Mineta as transportation secretary. When Princeton Survey Research Associates/Newsweek asked if Obama, who had put forth three Republican names to serve as Cabinet members, had chosen the appropriate number of Republicans and officials who had served under Bush, a plurality of 47% said the number was about right. Twenty-two percent thought there were too many, 15% too few. Public opinion tends to reward bipartisanship in general; choosing at least one Democrat would be a popular decision with the public overall, even if the base might balk.

As with party, relatively little polling has probed Americans' perceptions of the ideology of cabinet appointments, but the record that does exist seems to indicate that the public has largely felt that new presidents have gotten the balance about right. Trump's choices to this point have been far from moderate, but it remains to be seen whether the public's lower approval rating of his choices stem from beliefs about his choice's qualifications or their ideology. 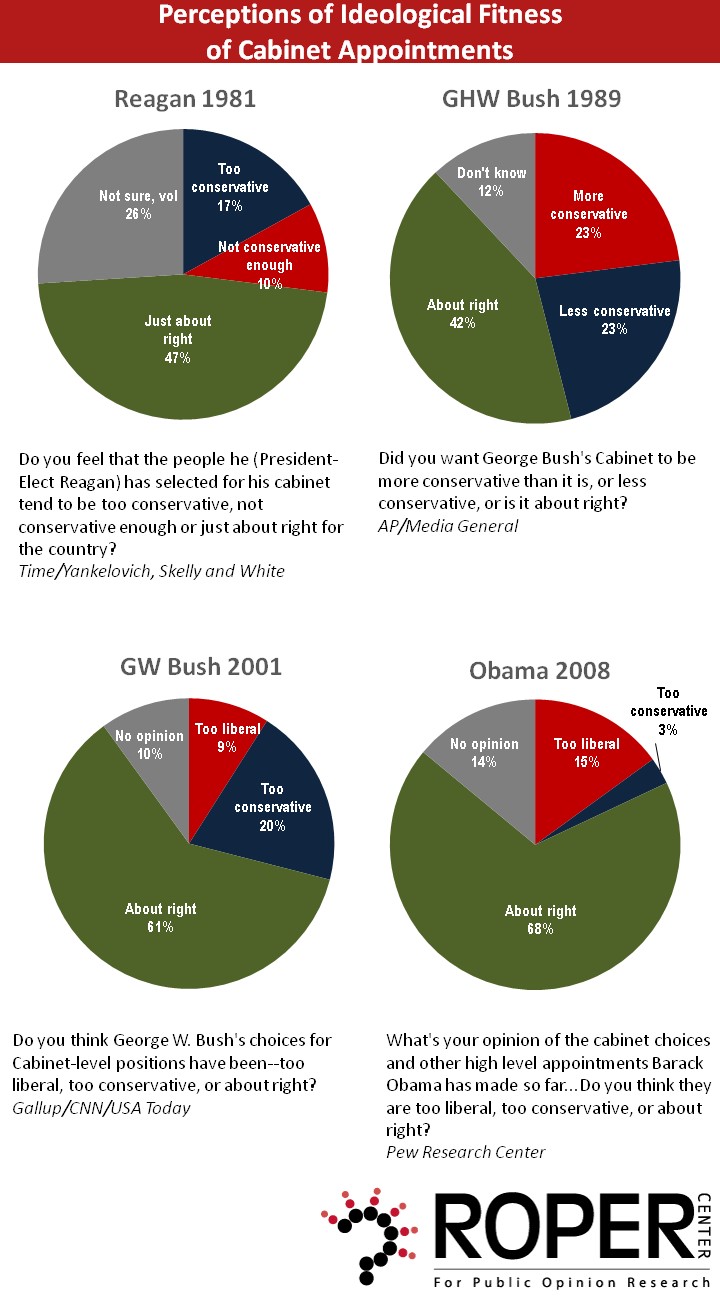