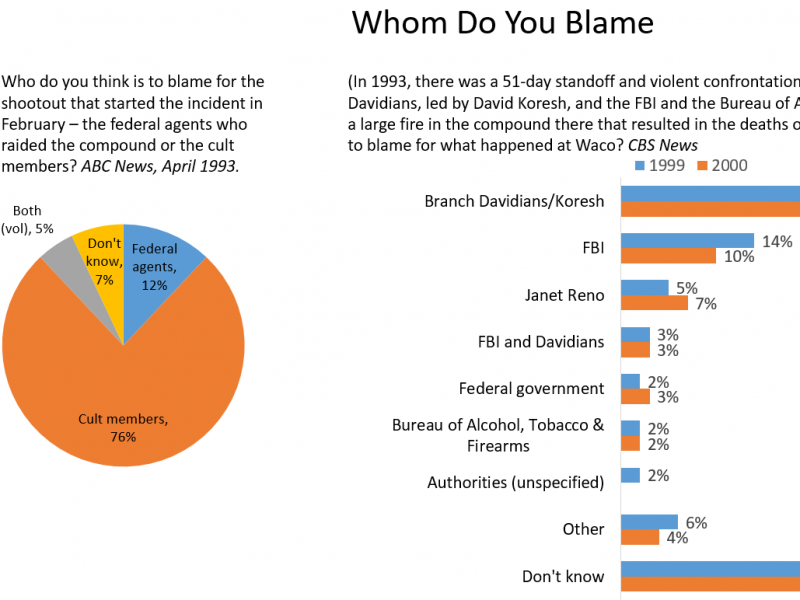 Twenty-five years ago this week, federal and Texas state law officers laid siege to the Waco, TX Branch Davidian compound, where they believed cult members had been stockpiling weapons and children were being sexually abused. A fire broke out, leaving 76 dead and bringing critical scrutiny to the agencies involved.

At the time of the events in question, Americans were strongly supportive of the FBI’s handling of the problem. Over seven in ten in a Gallup poll on April 20 said that the FBI’s decision to pump tear gas into the compound was a responsible one. Only 11% in this poll thought the FBI should have waiter longer to act; most thought they had waited long enough (24%) or had in fact already waited too long (60%).

An ABC poll from April 21 found that 76% of the public blamed cult members for the shootout that started the incident in February, while just 12% blamed federal agents. Moreover, 86% believed that the fire that consumed the compound had been set by the Branch Davidians themselves.

But the story of polling around the Waco siege shows how public perceptions change with emerging narratives. During civil cases against the government, Branch Davidians made a number of claims about the conduct of law officials, most of which were found to be baseless. Nonetheless, the issues had been raised. In 1999, the public learned that incendiary devices had been used at the siege, despite FBI claims to the contrary, a development that led Janet Reno to call for an investigation into the FBI’s actions.

Public opinion shifted considerably. Approval of the FBI’s handling of the standoff dropped from 70% during the events to a low of 38% in October 1999. 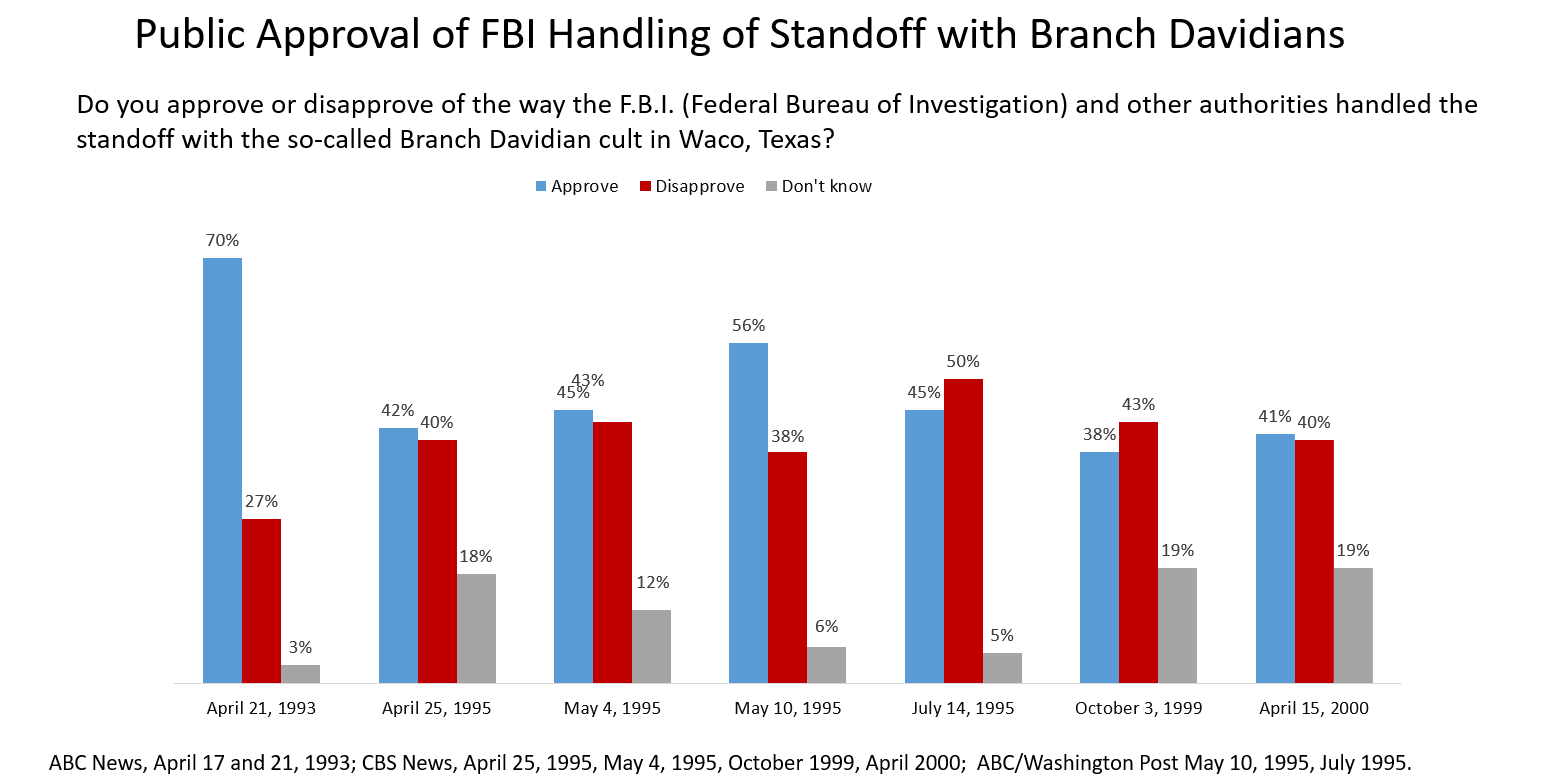 Although 46% of Americans in a 1999 Harris poll said they thought the Branch Davidians had set the fire at the compound themselves, 27% thought the FBI had done it, and 27% didn’t know. A plurality still felt that the blame for the outcome of the siege lay at the feet of the Branch Davidians and their leader, David Koresh, but some of the public blamed the FBI or Janet Reno, and a substantial proportion didn’t know where the blame should fall. In addition, while just 19% of the public in an ABC/Washington Postpoll in April 1993 said that the violence in Waco could have been avoided, 38% thought so when CBS fielded this question in October 1999. 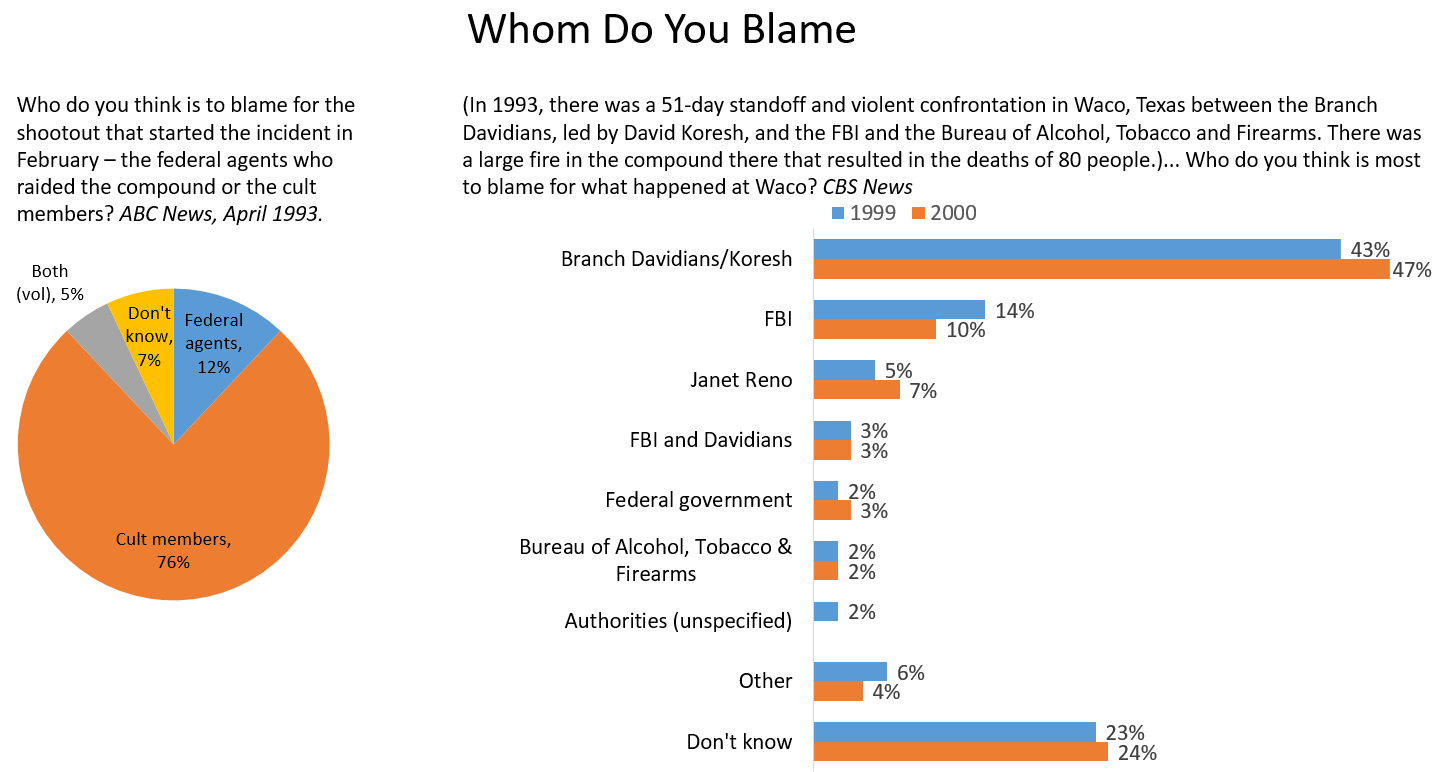 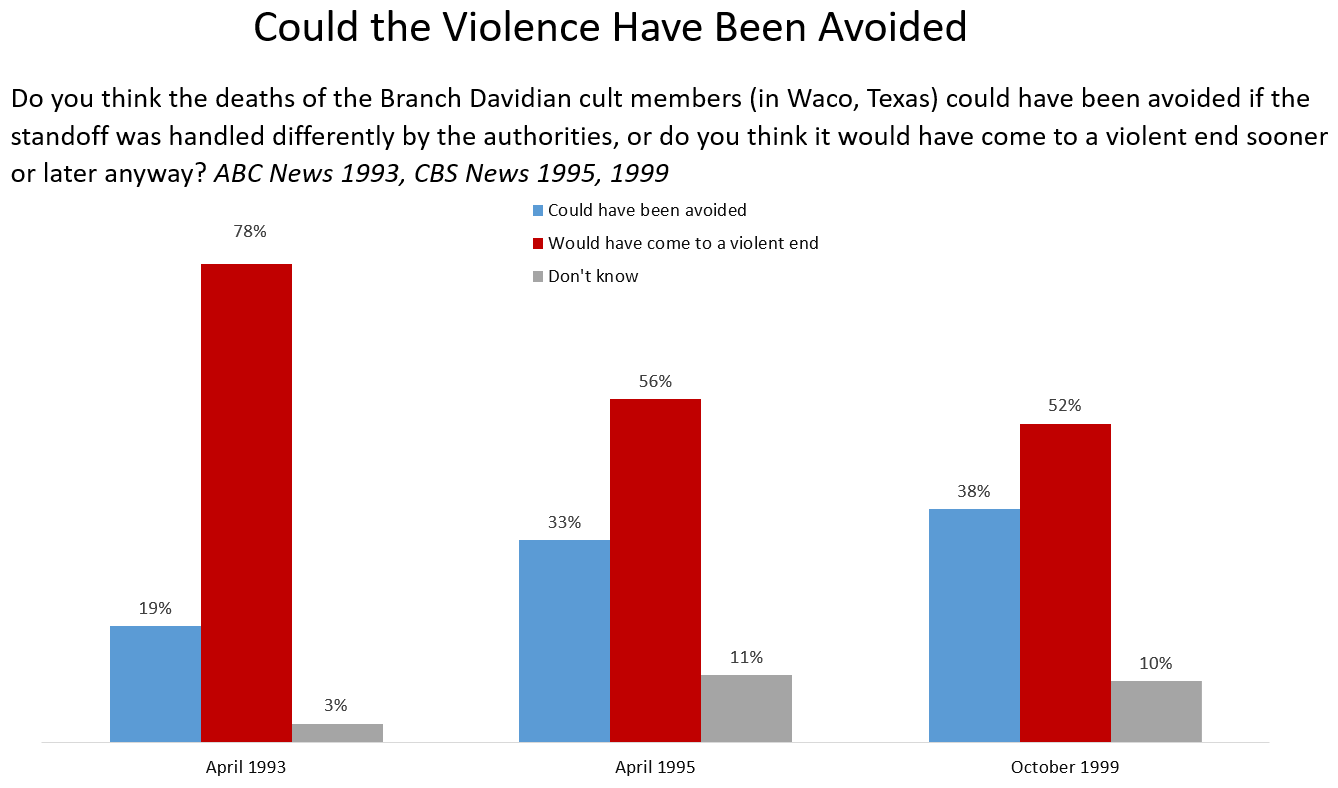 The Danforth Report, the result of a large-scale investigation into the government’s role in the events at Waco, was released in November 2000. The report held that government incendiary devices were not indeed responsible for the fire, which both witness accounts and evidence suggested had been set by the Branch Davidians themselves. The Danforth Report also cited forensic evidence against the claim that the law officials had shot at the compound and argued that the use of military forces had been limited enough to avoid violation of Posse Comitatus.

Whether this report shifted public opinion again toward a more positive view of the government’s role cannot be determined. The last major public poll to ask about Waco had been completed one month prior.