Wages of Win: The Public and the Minimum Wage Debate blog 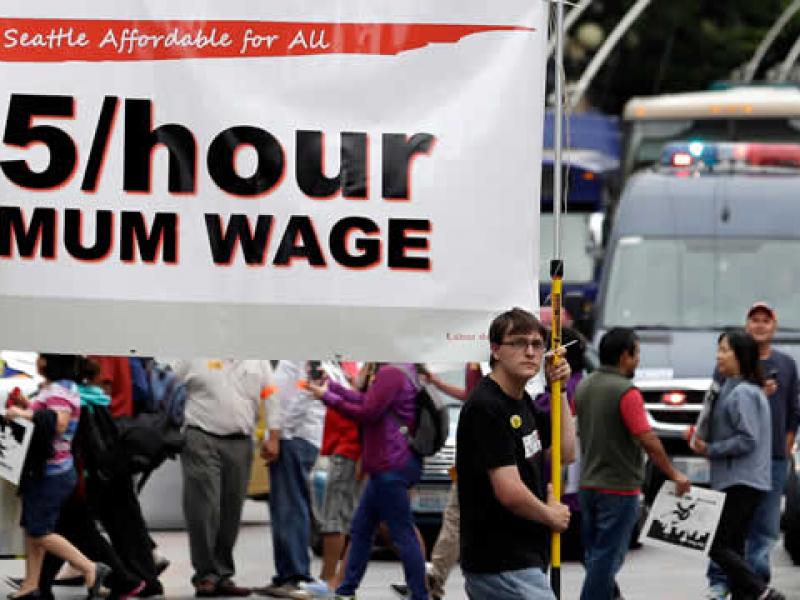 Hillary Clinton has suggested $12. Bernie Sanders favors $15. Donald Trump says he thinks a low one is good for the country. Jeb Bush doesn't think the federal government should be setting one at all. The minimum wage is proving a contentious issue in the current presidential race. Public opinion polling over the decades indicates that some candidates may have found a powerful issue in line with longstanding public attitudes, while others will struggle to convince the public to see it their way. From the Roper Center for Public Opinion Research archives:

The early years of modern polling coincided with the first decade of an established federal minimum wage. The initial minimum was $0.25/hour, the equivalent of $4.14 in 2015 dollars. By 1946, this had been raised to $0.40 ($4.90), and 65% of Americans in a Gallup poll supported a further increase to $.65/hour ($7.95). Firm majorities continued to support increases in the minimum wage in most polls through the 1960s. One exception came in a 1948 poll which asked about a $1.00/hour minimum wage, a whopping 150% hike. Even at that level, more than four in ten supported an increase.

A dollar just doesn't buy what it used to

Unfortunately, no trendline exists to measure changes in public opinion on the minimum wage; that is, no single consistent question wording has been used to gauge accurately changes in public sentiment on the issue. The variations in questions are manifold. Some question wordings mention the current minimum wage; others omit it. Some provide a specific increase amount; others do not. Some provide respondents with the option to say that the minimum wage should be reduced or eliminated. Arguments for and against are given in certain cases, and other questions mention specific proposals and the politicians associated with them. Bearing all of these variations in mind, support remains fairly consistent.

Looking at just those questions which ask respondents whether they approve/support/favor raising the minimum wage, the public has been asked 62 times since 1987 about their support for an increase. Only once did the proposal fail to get majority support, when a 2014 question asked about raising the current wage of $7.25 to $15, an increase of over 100%. The average support level for minimum wage increases of unspecified amount has been 78%, with similar average support for specific increases up to 50% of current minimum wage. This indicates that the public is highly supportive of substantial increases in the minimum, but the $15 level currently under debate may prove higher than many desire.

But what about jobs?

When Reason-Rupe asked in a 2014 poll if respondents supported a minimum wage increase, and then followed up with questions about whether they would favor an increase if it caused employers to increase prices or lay off workers, such scenarios did decrease support across all political parties. The threat of job losses brings total support under half.

Furthermore, some Americans are concerned that minimum wage increases could lead to reductions in available jobs for workers with limited skills. This concern rose from one CBS poll in 1996 to another in 2013. Higher concern is unsurprising. In 1996, the annual unemployment rate was at 5.4% and had not been above 8% in over a decade. In 2013, the annual unemployment rate was 7.4% and had just recovered from a level of 9.6% two years prior. However, it is worth noting that a majority of Americans are not worried about the potential loss of jobs. The likely reason for this is that a majority of the public do not actually believe a higher minimum wage would lead to fewer jobs. Sixty percent in the Reason-Rupe poll said that a minimum wage increase would either have no impact or even increase the number of jobs.

Can I count on your vote?

So most of the public supports an increase in the minimum wage, but do they feel strongly enough for this issue to affect their vote? In 2014, about half the country said they would be more likely to vote for a candidate who supported a minimum wage increase; only 17% said they would be less likely. A 2014 CBS News/NYT poll found that the country was divided on whether they could vote for someone who disagreed with them on this issue: 50% said yes, 45% said not. Those who favor a minimum wage increase were somewhat more likely than those who oppose it to say they would not vote for a candidate who did not agree with their position. For some portion of the public, a minimum wage increase has been a top priority. When given a list in December 2014 and asked to choose the first bill that Congress should address in the new year, the minimum wage was chosen by about the same proportion as chose spending reductions, job creation, immigration reform, and tax reform. 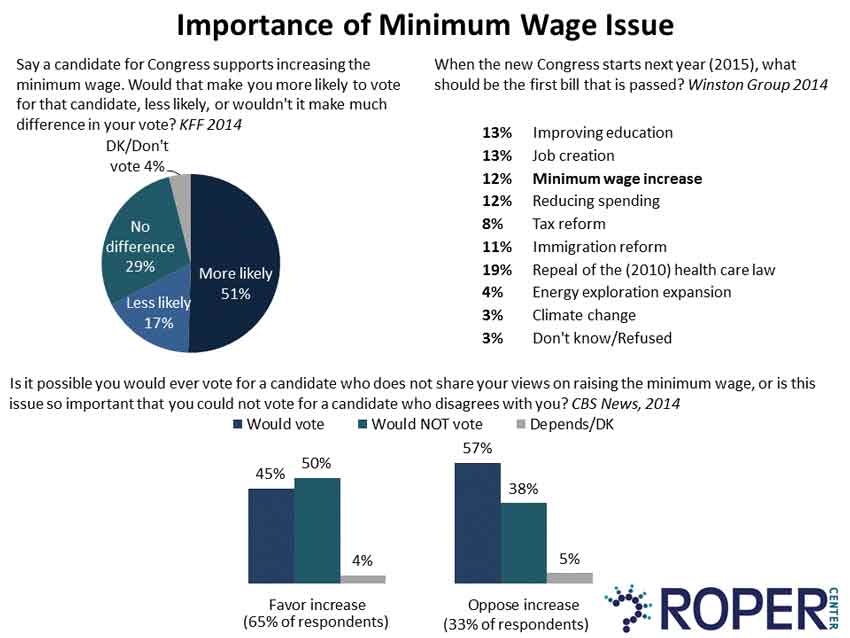 Recent polls indicate that, despite ongoing concerns about very large increases in the minimum wage, there is considerable support even for candidates who favor a $15 minimum. A 2015 NBC/WSJ poll found 48% of registered voters said such a position would make them more favorable toward a candidate, 38% less favorable, and 13% said that position would make no difference. Continued support for a moderate minimum wage increase appears to give Democrats a strong issue in the 2016 campaign.   Interested in more? View questions about the minimum wage in iPOLL