Wording Effects on Differences in Support for Socialist Programs

Americans dislike government plans, dislike the loss of private industry, but support an expanded Medicare for All. The phenomenon of higher support for policies depending on understanding is not a contradiction, but rather a potential result of differences in question wording. To evaluate these differences in support, I compiled data from the Roper Center for Public Opinion Research on public support for the social welfare policies of Universal Basic Income and Medicare for All. I used the increasingly popular definition of socialism to consider these socialist policies, focusing on promoting social welfare programs. A 2019 study from Winning the Issues[i] affirms this notion, where 63% of respondents identified Medicare for All as a socialist policy, and 61% of respondents identified free college tuition as a socialist policy.

In Figure 1 above, the first set of data comes from an NPR survey conducted by Marist College Institute for Public Opinion[ii]. The survey asked respondents ‘Do you think a Universal Basic Income of $1,000 per month for each American 18 or older is a good idea or a bad idea?’, with an average of 28% of respondents expressing that it’s a good idea (a breakdown by respondents’ political party can be viewed here). The second set of data is derived from a Pew Research Center for the People & the Press survey conducted by Ipsos[iii]. This survey gave a fuller definition for the concept of Universal Basic Income, asking respondents ‘Would you favor or oppose the federal government providing a guaranteed income, sometimes called a Universal Basic Income, of about $1,000 a month for all adult citizens, whether or not they work?’, with 45% of respondents indicating they somewhat or strongly favor the idea. The secondary survey with the definition of UBI given saw an average increase of 17% in support - indicating respondents had a more positive opinion of UBI after hearing the broader description from the Pew Research study. This initial lower support without a full description indicates a potential initial lack of understanding or familiarity with the term Universal Basic Income. It may also be possible that respondents are familiar with Universal Basic Income, but have more negative feelings toward it initially without a fuller understanding. By identifying social programs such as UBI with more developed explanations, there may be a relationship between higher support levels for the programs. Question wording which lacks a detailed explanation instead produces more negative and polarizing responses.

Figure 2 – Public Support for Medicare for All Depending on Definition 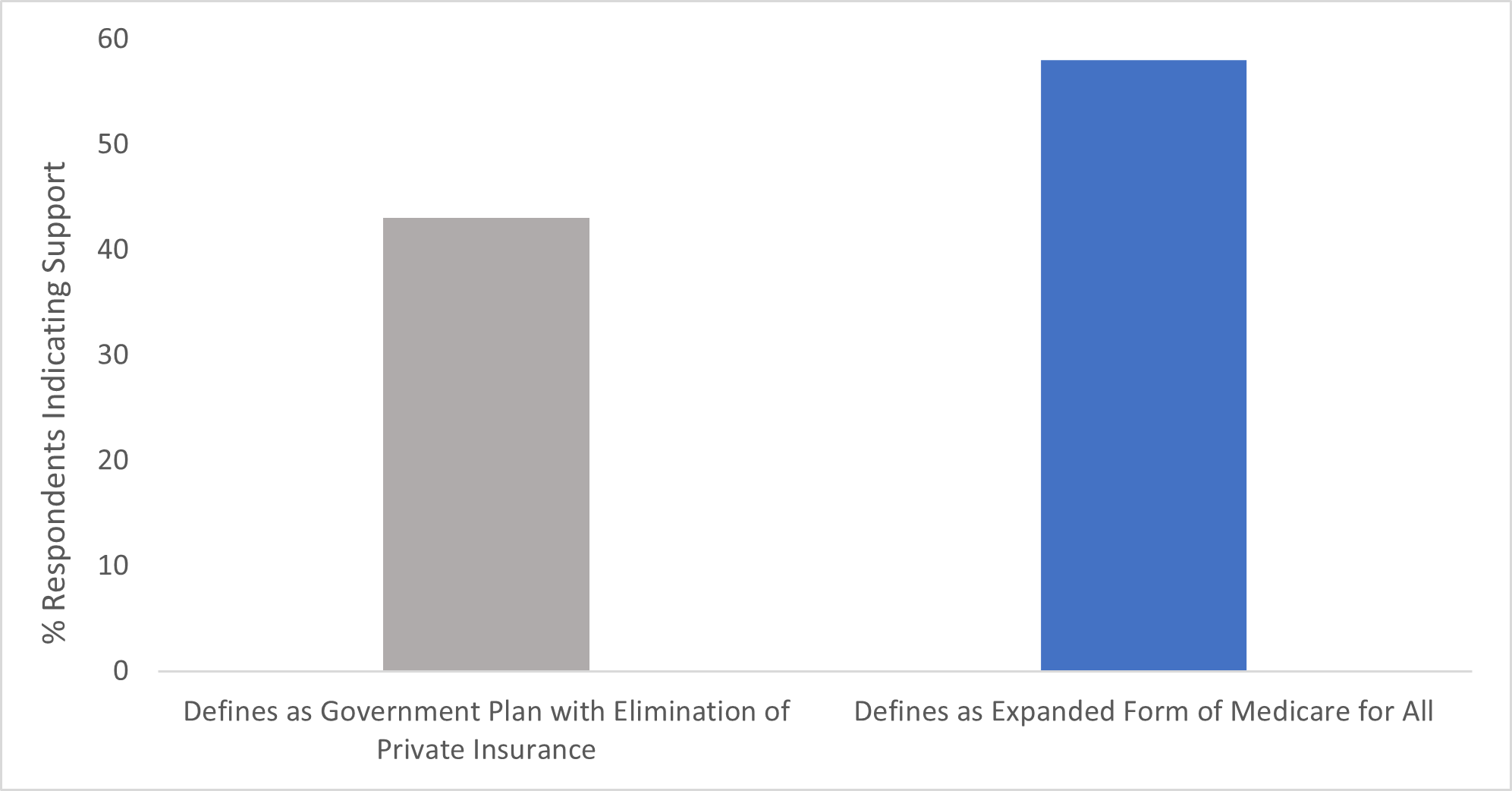 The effects of wording differences are also demonstrated in figure 2, where two different surveys asked respondents for their opinions on Medicare for All, using two different definitions for the term. The first, sponsored by NBC News and the Wall Street Journal and conducted by Hart Research Associates[iv], asked respondents if they support ‘Adopting Medicare for All, a single-payer health care system in which private health insurance would be eliminated and all Americans would get their health coverage from one government plan’. This survey, mentioning both the term ‘government plan’ and the elimination of private coverage, saw an estimated 43% of respondents indicating some degree of support. The second survey, sponsored by Kaiser Family Foundation and conducted by Princeton Survey Research[v], asked respondents if they favored or opposed ‘having a national health plan in which all Americans would get their insurance through an expanded, universal form of Medicare-for-All’. This survey saw an estimated 58% of respondents indicating some degree of support, a 15 percentage point increase in support. These results demonstrate differing support levels deriving from different understandings of policies, with the two surveys using decidedly different policies labeled Medicare for All. Support levels are higher for the Kaiser survey, which does not mention the elimination of private insurance and does not have an explicit mention of government, suggesting respondents feel more positively about this version of Medicare for All.

Interestingly, a 2020 survey sponsored by PBS NewsHour and conducted by Marist College Institute for Public Opinion[vi] gave no definition for a slightly different term, Universal Healthcare, and simply asked respondents ‘Overall do you have a favorable or unfavorable impression of universal health care coverage?’. 55% of respondents indicated a favorable opinion, suggesting that perhaps universal healthcare coverage is more positively perceived than universal basic income or the term ‘Medicare for All’. There appears to be a relatively strong negative relationship between public support and language such as ‘one government plan’ and ‘losing private coverage’ with opinion toward Medicare for All. This gives implications for how Medicare for All is presented, and thus received, and is evidentiary of potential stigmatization of the term, perhaps from its association with loss of private industry and increased government control as aforementioned. The aspersion of the term ‘Medicare for All’ in public opinion is reaffirmed by the previous 2019 Winning the Issues study, where only 42% of respondents identified single-payer healthcare as a socialist policy, compared to the 63% that identified Medicare for All as such. The connection to Medicare for All and socialism, in contrast to single-payer healthcare, and the lower support for Medicare for All has two major possible connotations. The first is that although support for socialism is in general on the rise, it may still carry unpopular implications, being more readily connected to potentially stigmatized policies such as Medicare for All. Secondly, public policies appear to remain more favorable in the public eye if they stray from connections to increased government control, loss of private industry, and a connection to socialism.

Genevieve Richards is a 2021 Kohut Fellow and junior at Cornell, majoring in Government and minoring in Information Science. She is interested in the intersection of politics and technology and real-world applications for people. On campus, she is also an officer for the Alpha Phi Omega service fraternity, a policy analyst for the Roosevelt Institute, and a member of a co-op. In her free time, she enjoys fostering kittens.