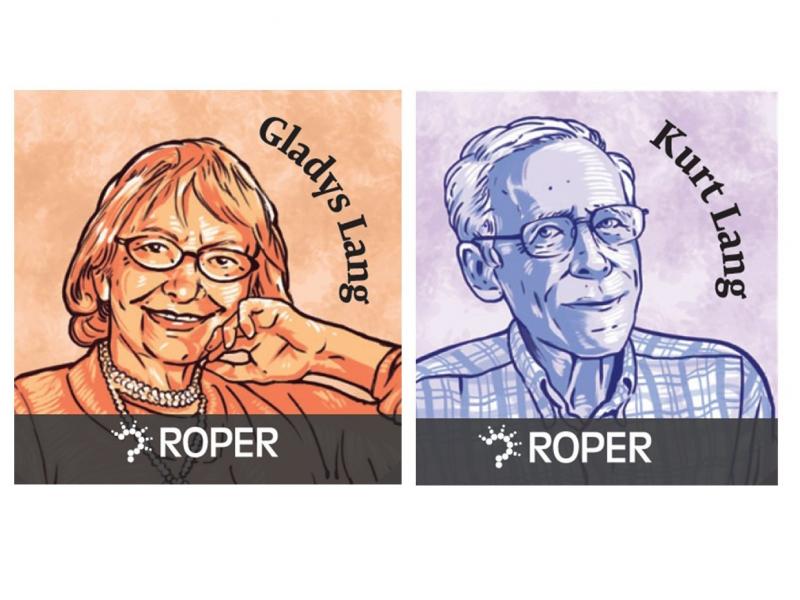 Kurt Lang (1924 –2019) and Gladys Engel Lang (1919 –2016) were American sociologists and communications theorists whose work on the influence of media in shaping public opinion gave deeper meaning to the 1970’s-term “media event.”

They met as graduate students at the University of Chicago in 1949 and often worked on projects together. Their 1952 study of General MacArthur Day and the effects of radio/television on American life was the beginning of a lifetime interest studying the role of news media in shaping political outcomes and public opinion.

In 1951, General Douglas Macarthur, then in charge of the United States Armed Forces in Korea, publicly clashed with President Truman.  MacArthur advocated using Nationalist Chinese forces from Taiwan to fight Chinese Communist forces. Truman, fearing escalation of the “limited” Korean conflict into WWIII, relieved MacArthur of his duties.  Popular at home, MacArthur came back to the United States and was lauded with a number of celebratory parades and speaking events.

The Lang’s groundbreaking insight was that participants at the Chicago MacArthur Day event itself had a very different perception of the magnitude, excitement and importance from the observers watching the event on television.  In-person observers expected a “wild spectacle” but reported a “great let-down.” TV viewers reported they “saw what they expected.” The Langs argued that the medium of television had allowed the production and arrangement of events to shape observer’s opinions.

They went on to be affiliated with Canadian universities, with Gladys teaching at Carleton University on the impact of television on French Canadian culture, while Kurt taught at Queen’s College and also directed audience research for the Canadian Broadcasting Corporation. Later academic affiliations included Columbia University, University of California at Berkeley, and University of Washington,  They published several books together and were best known for their later works Politics and Television (1968) and The Battle for Public Opinion: The President, the Press and the Polls During Watergate (1983). In Battle, they used the term “refraction” to describe how the media “framed” events and constructed a manageable reality and wrote of “agenda-setting” as presenting the television audience a limited agenda of possible meanings.

They were lifelong active members of AAPOR and both served on the AAPOR Council.

Sources for this Biography: