Questions from British Institute of Public Opinion polls from 1938-1946 have been added to Roper iPoll question search. Click here to see all questions. These surveys cover a variety of topics such as the popularity of Prime Ministers Chamberlain and Churchill and other government officials; opinions on British foreign policy in the years surrounding WWII; domestic conditions with focus on air raid shelters, rationing, consumer behavior, and other economic issues; social issues including the role of women and minimum wages; current and future prospects of the war; and opinions of the United States and Russia.

The British Institute of Public Opinion was formed in 1936 to bring to the United Kingdom the new public opinion techniques pioneered by George Gallup, Elmo Roper, and Archibald Crossley in the U.S. Scientific polling had just demonstrated its worth by outperforming the venerable Literary Digest in the 1936 presidential election, and BIPO wanted to bring the same accuracy in the measurement of public opinion across the Atlantic. Following experimental testing, they began publishing data the next year, and in 1938 the rights to publish their work was acquired by the News Chronicle daily newspaper and gained wider distribution. BIPO’s work was also proven accurate in predicting election results on multiple occasions, helping polling gain legitimacy with the British public and media.

A broad range of fascinating topics was addressed in these surveys, including the impact of anti-Semitism on British opinion of Germany. Surveys include questions concerning the opinions about BBC broadcast of dance music on Sundays, and whether amateur national athletes should be compensated for lost earnings. The post-war questions have several interesting queries about the new international order and especially the place of atomic weapons in it. 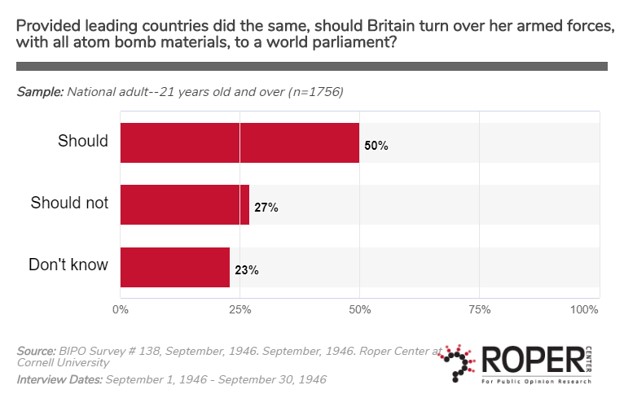 The specter of WWII looms over nearly all questions. Respondents were asked about what should be done with the Axis nations after the war, how long rationing should be extended in order to help supply food to the needy of the war-torn Continent, and how to prevent future wars. The war brought topics such as using women in war work and whether or not German cities should be targeted for bombing. They asked whether food rationing coupons should be used in restaurants, and one had (and planned to use) an air-raid shelter on their property. There was even a question about whether or not Franklin Roosevelt should break the US two-term tradition and whether that would be good for the world. In all, the surveys provided a valuable and fascinating look at the early days of public opinion research in a crucial period of world history.