New to the archive: Charney Research Poll: Afghanistan 2007! This survey of 1,377 adults was conducted face-to-face in Afghanistan from October 28, 2007 to November 7, 2007. It was part of a series of public opinion polls supported by ABC News in Afghanistan during the George W. Bush administration.

The dataset provides essential information about Afghans’ perceptions of U.S. and NATO efforts to provide security in the country, ratings of the strength of the local Afghan police forces, and attitudes about women’s rights. Questions include: what is the biggest problem facing Afghanistan? Do you think your children will have a better life than you? How much of a problem is the issue of corruption among government officials or the police? Are there deliveries of night letters [clandestinely distributed leaflets] by the Taliban in this area?

A series of questions on experiences of violence and respondent living conditions, including security, jobs, schools and availability of food and medical care, illuminates the regional differences in experiences of life in Afghanistan. 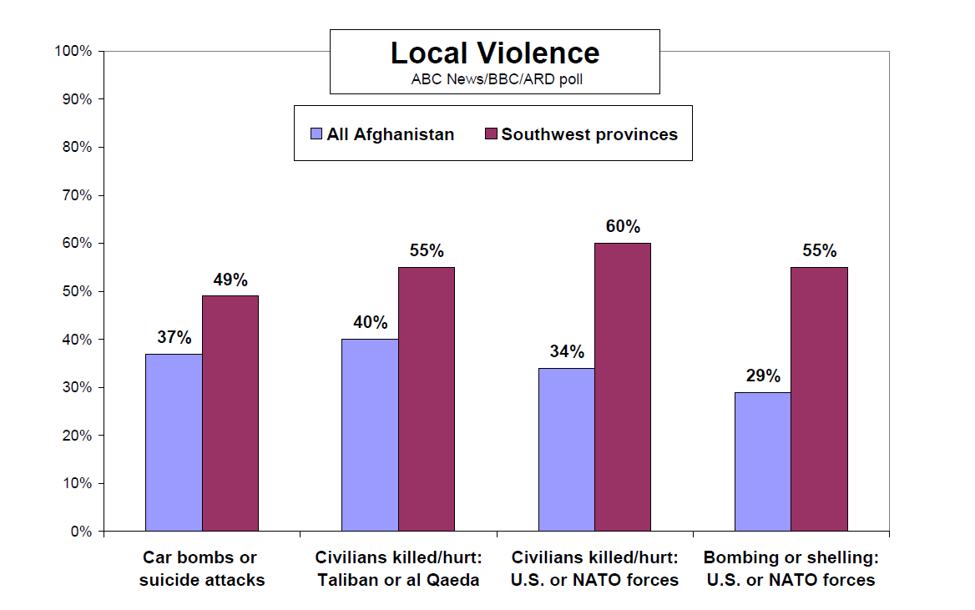 Unsurprisingly, regional differences in attitudes are also apparent. The contrast is particularly strong in attitudes about growing opium poppies. In Helmand, the top opium-producing province, respondents were much more likely to say that it was acceptable to grow opium poppies, at least if it was the only way to earn a living.

Nationally, 84% supported the government taking measures to kill off poppy fields. The strong support for government efforts to eradicate the opium poppy industry is particularly striking in light of the proportion of Afghans who were aware of families that had suffered serious consequences from this policy, including hunger and hardship (40%) and having to give up children to creditors (14%).

The challenging fieldwork for this poll was conducted by new Roper Center data provider Charney Research, which specializes in surveys of countries in crisis. The archival package includes extensive methodological information, a report with analysis from Gary Langer of ABC News, and questionnaires in English, Pashto and Dari.

Interested in more data from Afghanistan? Polls in 2005 and 2006 from Program on International Policy Attitudes and WorldPublicOpinion.org, conducted by D3 Systems and the Afghan Center for Social and Opinion Research, also offer and overview of Afghan public opinion on security issues, the Taliban, economic conditions, and the corruption. The Pew Research Center's Forum on Religion & Public Life Poll: The World's Muslims--Religion, Politics and Society interviewed Muslims in Afghanistan and 25 other countries from October 24, 2011 - November 24, 2012.