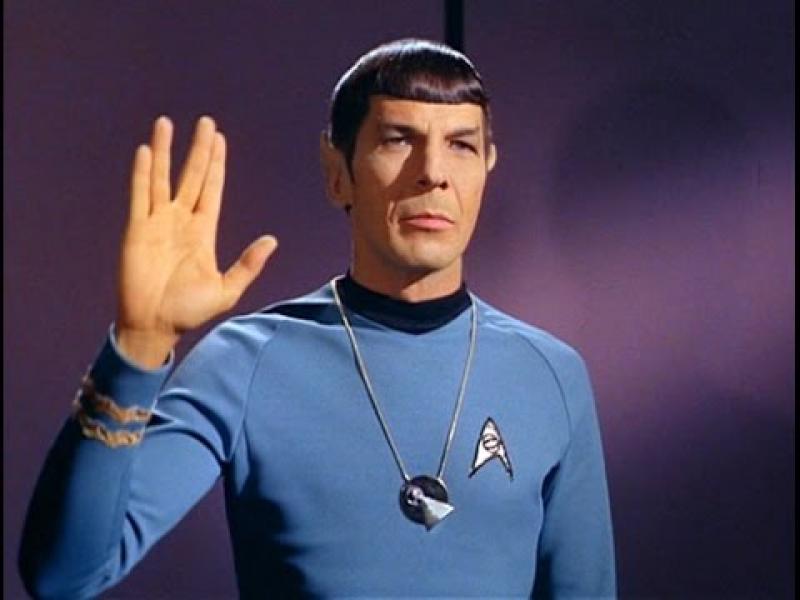 Fifty years ago this September, Star Trek aired on NBC. The show went on to become a cultural icon, an American vision of a future that went beyond nations. A review of public opinion polling from 1967 shows Star Trek was both ahead of its time and very much of it, grappling with the issues that confronted the nation.

In the mid-sixties, the country was working hard to attain the goal John F. Kennedy had set in 1961 to put a man on the moon before the end of the decade. Spending on NASA reached a peak of 4.41% of the federal budget in 1966, putting the “final frontier” very much on the minds of Americans when the Enterprise first came into view. But the show’s wide-eyed optimism about the importance and value of space exploration was not shared by a majority of the public. Forty-two percent in a 1967 Harris poll thought spending on the space program should be cut back; only 13% wanted it expanded. Sixty percent in the same poll said they would favor discontinuing the space program if the Russians were not in space.

In contrast, most Americans today see the 1960s investment in space exploration as worthwhile. In a 2014 Monmouth poll, 56% said that spending had had long-lasting benefits; 34% thought the benefits were short-lived.

The audience in the 1960s also didn’t have much faith in the existence of Mr. Spock. Just 34% of people in a 1966 Gallup poll said they thought there were people “somewhat like ourselves” living on other planets in the universe. By 1999 that had only risen to 41%. In 2010, a CBS News poll found 47% of Americans believed there was intelligent life on other planets, but the change in wording prevents a direct comparison between the two data points. Many people might not consider “intelligent life” to be something “somewhat like ourselves.”

Star Trek’s vision of a united world was at odds with a prevailing skepticism about the potential for peace in 1967. Just 43% of Americans in a 1967 Harris poll believed brotherhood and love of mankind could be achieved on Earth; 42% believed peace could be achieved on Earth. But when Americans were asked to say in their own words in a 1964 Gallup poll what their wishes and hopes for the country’s future would be, the most common answer, at 50% of responses, was “peace.” Star Trek’s resonance came in its presentation of the country’s best hope for itself.
The many ethnicities and races of the Enterprise crew were a concrete representation of the Earth’s peaceful future. Mr. Sulu’s nationality of origin was never specified, but the character was played by Japanese-American actor George Takei. Such a choice might have been controversial just a few decades earlier, but at the time, the country was moving quickly in the direction of acceptance of a better relationship with Japan. A Japanese Foreign Ministry poll in 1967 found that 45% of Americans thought the Japanese were a dependable ally; 32% did not. In 1960, 31% had said Japan was a dependable ally; 55% disagreed.

Ensign Chekov represented a far more surprising presence for the time. Most Americans saw Russia as a serious threat – and a growing one. Roughly half in a December 1966 Gallup poll said that 1967 would be a year when Russian power would increase; just 26% thought it would decline. The end of the Cold War was expected to be far off. In a 1965 Gallup poll, just 30% of the country thought that Russia and the West would be living together in peace by 1985, and only 21% expected that communism would collapse by that time.

In the world of Star Trek, countries may have settled their differences, but the galaxy had not. By creating alien opponents of the United Federation of Planets, the Star Trek universe was able to maintain a vision of a unified globe while still offering a reflection of the Cold War that occupied the minds of its viewers. In an Institute for International Social Research/Gallup poll taken three years before Star Trek’s debut, 65% of Americans said they were concerned a great deal about combating world communism; an additional 24% were considerably concerned. The battle for intergalactic influence against foreign cultures bent on building greater control among smaller nations outside of either system must have seemed familiar to Americans who were being regularly asked whether Russia or China represented the greater threat to world peace. Polls of the Federation might have asked the same question about the relative menace of the Romulans and Klingons.

These two alien races were portrayed as warrior people, cunning and dangerous. In fact, they were exactly as Americans described Russians in a 1966 Gallup poll. When asked to choose words from a list that most described the Russian people, the public most often selected hard working (45%), intelligent (23%), warlike (24%), and treacherous (18%). Words chosen to describe the Chinese also included hardworking (37%) and warlike (23%), and added ignorant (24%) and sly (20%). Whether consciously or not, the Star Trek writers seem to have incorporated some ethnic and racial stereotypes of the time into their depiction of otherworldly villains.

Star Trek tackled the racial discord of the mid-sixties with episodes highlighting the absurdity of race-based value judgments through metaphors using alien species. But at least once the show addressed the country’s racial taboos directly, with American television’s first scripted kiss between black and white actors. Although Nichelle Nichols, who played Chief Communications Officer Uhura, said the show received very little negative feedback about the now-famous kiss, the public opinion record reveals just how bold this move was. A 1968 Gallup poll found 73% of the public disapproved of marriages between whites and non-whites, while a NORC poll the same year found that 93% of non-blacks would object if a teenager of theirs wanted to date a “Negro” boy or girl, 77% of these strongly. Public opinion changed dramatically over the decades. In 2015, a Pew poll found just 11% of Americans thought it was “bad for society” for more people of different races to marry. And 52% in a 2011 Kaiser/Washington Post poll said they had dated someone of another race.

Oh, girls in space, be wary

Uhura was not only the only black member of the central cast, but the only woman. Polling in the 1960s barely touched on questions about working women, let alone women in science. Even in 1994, a 57% majority of Americans in a Porter/Novelli poll said they thought men were more comfortable than women with most new technology. Having a black woman serving in an important technological role was a choice far ahead of its time. Today, the public agrees on the importance of women in science. Ninety percent of the public in a 2015 Kaiser/Washington Post poll said increasing the number of young women who study math, science, and technology should be a top or important priority in improving women’s lives.

The world of Star Trek did not stay locked in 1967 any more than the real world did; many sequel series and movies have expanded upon the original. As public opinion has shifted in many ways to be more in line with the 1967 Star Trek, the canon has continued to move forward, taking on new timely topics, while maintaining the core idealism about humanity’s future that gave the first series its appeal.