Long-Term Care in America: Who Should Bear the Responsibilities & Costs of Care 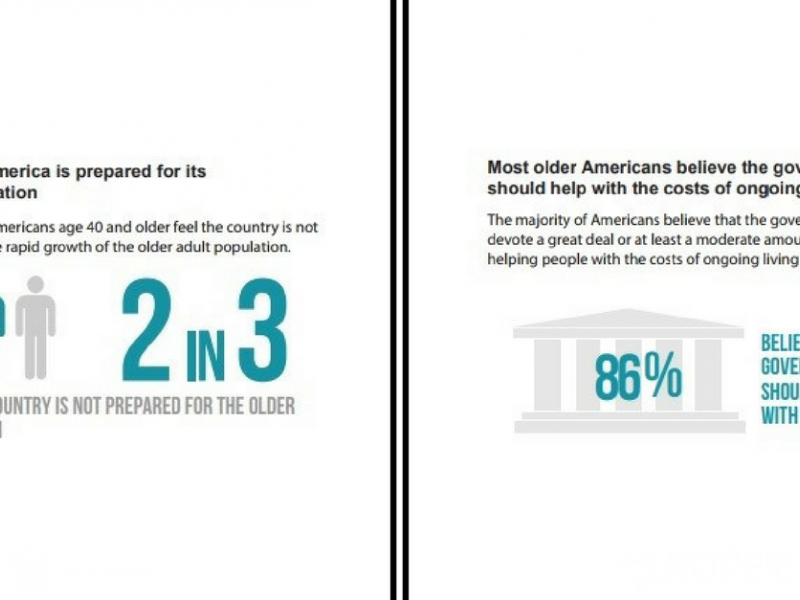 Source: AP-NORC In March 2017, the Associated Press-NORC Center for Public Affairs Research conducted a survey of 1,341 Americans, including an oversample of Hispanic adults, ages 40 and over. Funded by the SCAN Foundation, this survey is the most recent in a series studies on Americans' attitudes and experiences regarding long-term care for the aging population. With a population of 46.2 million adults ages 65 and over reported in 2014, and more than 98 million projected by the year 2060, the question of how to adequately provide long-term care for the elderly will remain a crucial issue for policymakers for the foreseeable future. Results of this survey indicate majorities across Democratic, Republican, and independent party lines are in favor of paid family leave. Additionally, three out of four of those surveyed support tax breaks for caregivers, and over half say that Medicare should shoulder the responsibility of long-term care costs. Few believe that Americans are prepared for long-term care either on a national or personal level, and an overwhelming majority believe the government should help with these costs. (Source: AP-NORC) View the other four surveys in this series here: Long-Term Care in America: Expectations and Preferences for Care and Caregiving (2016), Long-term in America: Americans' Outlook and Planning for Future Care (2015), National Survey on Long-Term Care: Expectations and Reality (2014), Long-Term Care: Perceptions, Experiences and Attitudes Among Americans 40 or Older (2013) Interested in more data on long-term care? Roper has polls from the past three decades from AARP, Gallup, and the Kaiser Family Foundation. Check out our database for more!