Money, Politics and the American Public 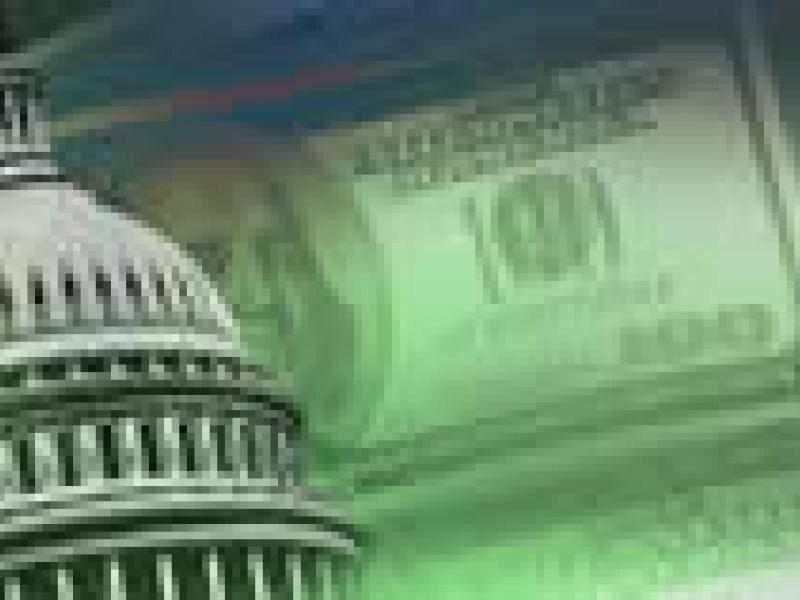 “Politics has got so expensive that it takes lots of money to even get beat with nowadays.”

Observers of the American political scene have long denigrated politicians’ reliance on money and the donors who provide it. The influence of money in politics in general and campaigns in particular is a staple of op-ed writers, late-night comedians and armchair pundits. As another Federal Election Commission reporting deadline looms, how bad does the public really think the problem is – and what are they willing to do about it?

Just too much money in politics

Not surprisingly, polls have always shown the public to be concerned about the influence of money on politics. From a 1973 Harris poll in which nearly nine in ten said that spending in political campaigns had become excessive to a 2012 ABC News/Washington Post poll that found three-quarters concerned about the amount of money being spent on political campaign advertising by companies, unions and wealthy individuals, the public has remained firmly convinced that there’s just too much money in politics.

The obvious solution, in the public’s mind, is limits – on spending and on donations. A 2013 Gallup poll found the public willing to put caps on total campaign spending. Almost eight in ten supported limiting the amount of money candidates for the US House and Senate can raise and spend on their political campaigns. In a 2014 CBS News poll, the public showed strong support for restricting campaign contributions from individuals (71%) and spending on advertising from PACs (76%). The public has favored such measures for decades. In 1973, before limits on individual contributions were put in place with 1974’s amendments to the Federal Election Campaign Act (FECA), 68% supported a $3,000 cap on individual contributions in a Harris poll.

Given the public’s long-standing support for contribution limit, it is not surprising that 67% in a 2010 60 Minutes poll said they disagreed with the Supreme Court ruling in Citizens United v. Federal Election Commission allowing corporations to spend as much money as they want on campaign ads. What might be surprising, however, is the significant share of the public that accepts the core argument in the Court’s ruling in this case. An October 2009 Gallup/First Amendment Center poll, taken after arguments had been presented in Citizens United, but before the ruling had been made, found that 57% of respondents considered campaign contributions to be a form of free speech, while only 37% disagreed.  A bare majority (53%) said that placing limits on how much individuals, corporations or unions can contribute to political campaigns was a greater priority than protecting their rights to freely support political campaigns, while a significant minority (41%) said the opposite.

The public may not have much faith in the current campaign financing system, but historically they have distrusted the most commonly posited alternative. Public financing of campaigns has never been embraced by a majority of the public.  The first question about public financing was asked by Gallup in 1938. Respondents were asked if they favored replacing the system of donations with “having Congress appropriate six million dollars each to the Republican and Democratic parties once every four years for campaign purposes.” Only 26% supported such a change – perhaps the hefty price tag was discouraging.  But through the years, questions that have probed the public’s willingness to consider a shift to a public financing system have shown gains in support. 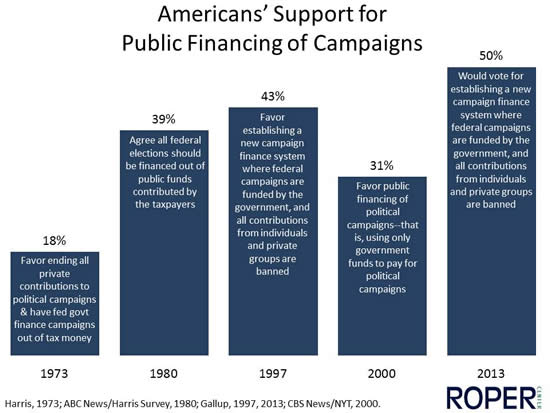 Sunshine is the best disinfectant

From the earliest days of polling, the public has expressed firm support for knowing where politicians get their campaign money. In 1939, Gallup asked if candidates for Congress should be required to report the money they raise and spend in their primary campaigns as they do in the general elections, the latter requirement having been in place since 1925 when amendment were made to the Federal Corrupt Practices Act. More than seven in ten Americans supported this expansion, but change did not arrive until the FECA was amended in the mid-1970s. More recently, a 2010 CBS News/NYT poll found 81% considered the laws that require disclosure of financial information by campaigns to be very important. And the public would like to see even more transparency. A 2012 Democracy Corps/Public Campaign Action Fund poll found 84% favoring expansion of disclosure laws to include requirements that corporations and non-profit groups disclose their sources of funding when they participate in elections.

The public may support many laws that attempt to ameliorate the effect of money in politics. But a substantial share are also skeptical about how closely these laws are followed. Almost half of Americans in a 2007 ABC News/Washington Post poll said politicians weren’t sticking to the fundraising rules – little better than 1955, when 58% in a Gallup poll said campaign funding laws were not lived up to.

It’s not only the public who hate the system