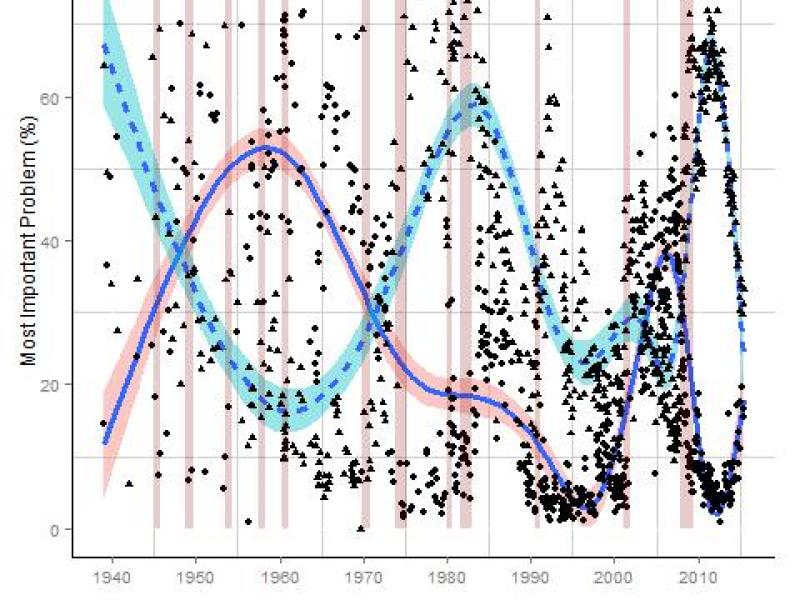 Public opinion researchers depend on certain questions as essential public opinion barometers, like presidential job approval or Bud Roper's right-direction/wrong-track measure. Perhaps no other question is as often used to determine what is foremost in the minds of the public than the open-ended‚ "What do you think is the most important problem facing this country today?" Respondents offer their concerns in their own words, unaffected by potential bias introduced by limited lists of answers. Asked since 1939, tracking results from the‚ "most important problem" (MIP) question reveals shifting public concerns over time, as the country grappled with crises from recessions to war to natural disasters. Now, through the work of Colton Heffington, Brandon Beomseob Park and Laron K. Williams (University of Missouri), public opinion analysts interested in this question will have a set of powerful new tools at their disposal. These researchers have merged datasets from 1939 to 2015 to create the MIPD Individual Dataset containing the individual-level responses to the MIP question, as well as demographics, economic evaluations, presidential approval, and party competency questions; the MIPD Aggregate Dataset, a survey-level dataset containing the aggregate percentages of MIP responses; and the MIPD Annual Dataset, offering the percentage of Americans identifying various categories as the "most important problem" facing the country. They have also a create a Stata command file to allow other researchers to create their own datasets from the individual-level dataset by varying the temporal domain (annual, quarterly or monthly), the subgroup (i.e., Democrats vs. Republicans), the specific question wording, and the coding scheme. Access the most important problem datasets here. Roper Center is proud to provide its users with this important new work as part of our archive. Heffington, Beomseob Park and Williams' article "The 'Most Important Problem' Dataset (MIPD): A New Dataset on American Issue Importance," which investigates the comparative importance of foreign policy and economic concerns and the role of partisanship in identification of priority issues, is forthcoming in Conflict Management and Peace Science.