Podiums, Platforms, and Polls: Public Opinion on the Election Debates 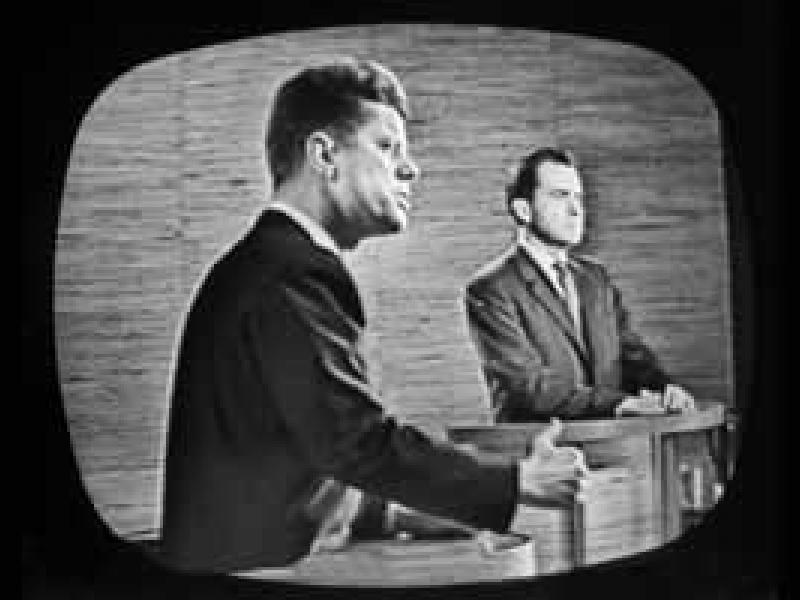 Debate season: a time for zingers, quips and occasionally serious policy conversations. These events are meant to sway public opinion, but what does the public think of the debates themselves? A review of historical polling reveals what the public thinks about who gets included in debates, how many should be held, what format they should have, and, of course, who won. From the Roper Center for Public Opinion Research archives:

The more, the merrier

Who should be allowed to take the stage on debate night has been a contentious issue in many election years. Large primary fields have led to arguments about what criteria should be used to determine participants, while in the general election, the inclusion of third-party candidates has always been controversial. Overall the American public has an inclusive attitude toward debates. Majorities of over six in ten favored the inclusion of Independents John Anderson and Ross Perot in debates in the years they ran. The public was divided in 1996, however, about the inclusion of candidates from other parties, like the Libertarians, the Greens, and the Natural Law party. Forty-five percent in a Gallup/CNN/USA Today poll thought they should be included, 44% disagreed. Just over half the country wanted to see Ralph Nader in the 2000 debates, while a slighter lower proportion wanted Pat Buchanan included. 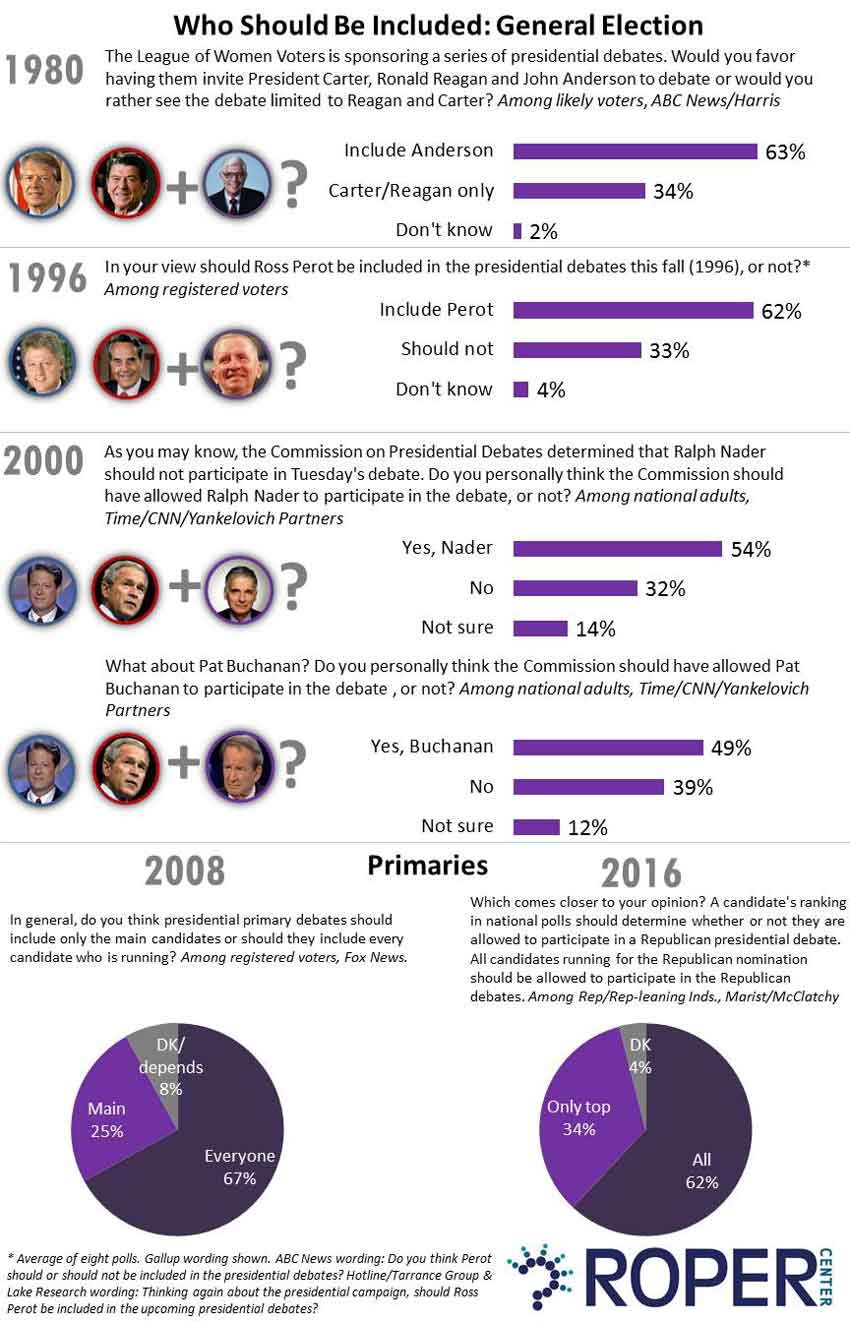 Majorities when asked have supported including all primary contenders in debates. Two-thirds in 2008 thought primary debates should include all candidates in the running. Similarly, 62% in 2015 thought all Republican candidates should debate, while a third thought only those candidates ranked highest in national polls should be included.

Though the public has only occasionally been asked about their preferences for debate formats, a clear pattern emerges from those times when they have. Debates with questions from voters are preferred over those with a single moderator or multiple journalists questioning the candidates.

Bernie Sanders and Martin O'Malley have both expressed a desire for more Democratic primary debates. Older polling gives little indication of how many debates the public thinks are appropriate in a primary. However, Americans seem to be fairly satisfied with the number of debates that are commonly held in general elections, and most are not clamoring for more. One exception came in 2000, when Al Gore suggested that he and George W. Bush forgo political advertising and instead hold weekly debates. In a CBS poll, 65% of registered voters thought this sounded like a good idea. They were not asked if they intended to watch weekly should this plan be adopted.

How much do debates matter?

In 1960, Roper/Fortune asked likely voters who had watched the Kennedy/Nixon debates what kind of effect the debates had had on their vote. A plurality of 44% said they had had no effect, and 41% said the debates had made them more sure about their choice. Only 7% said the debates had decided their vote. Through the years since, polls have continued to show that most voters do not think debates help decide their vote. For example, in the 1984 NBC News National Election Exit Poll, 62% said the debates did not help them decide who to vote for, and 70% said the same in a 1996 ABC poll. A 2004 Marist poll of registered voters found just 19% said the debates would help them decide; 78% had already made up their minds. Debates may hold more sway in primaries. Multiple polls from the 2012 Republican primary, for example, show that strong majorities consistently said that the debates were at least somewhat important in helping them to decide their vote, though only between about one in five and one in three said they were very important.

With the first modern election debate in 1960 came the first polling question about who did the best job. Among Americans who watched the debates (69%), John F. Kennedy won the day for 44%; 23% thought Richard Nixon did better. General election debates were not held during the next three elections. But since 1976, pollsters have consistently asked Americans who won or did the best job in general election debates, despite regular handwringing about the value and meaning of such a question. The subsets of the public who have been asked this question have varied significantly. Many of the earliest polls sampled the general public who had watched the debates. Then samples of registered voters and likely voters became more common, and often respondents were included whether they had watched the debate or only heard about it. In the last two elections, some survey firms have moved away from registered voter back to general samples. For the sake of comparison across the largest number of elections, the chart below compares only polls of registered voters who watched the debates, except for one debate in 2008 and all in 2012, when the only available polls of debate-watchers were based on national adult samples. 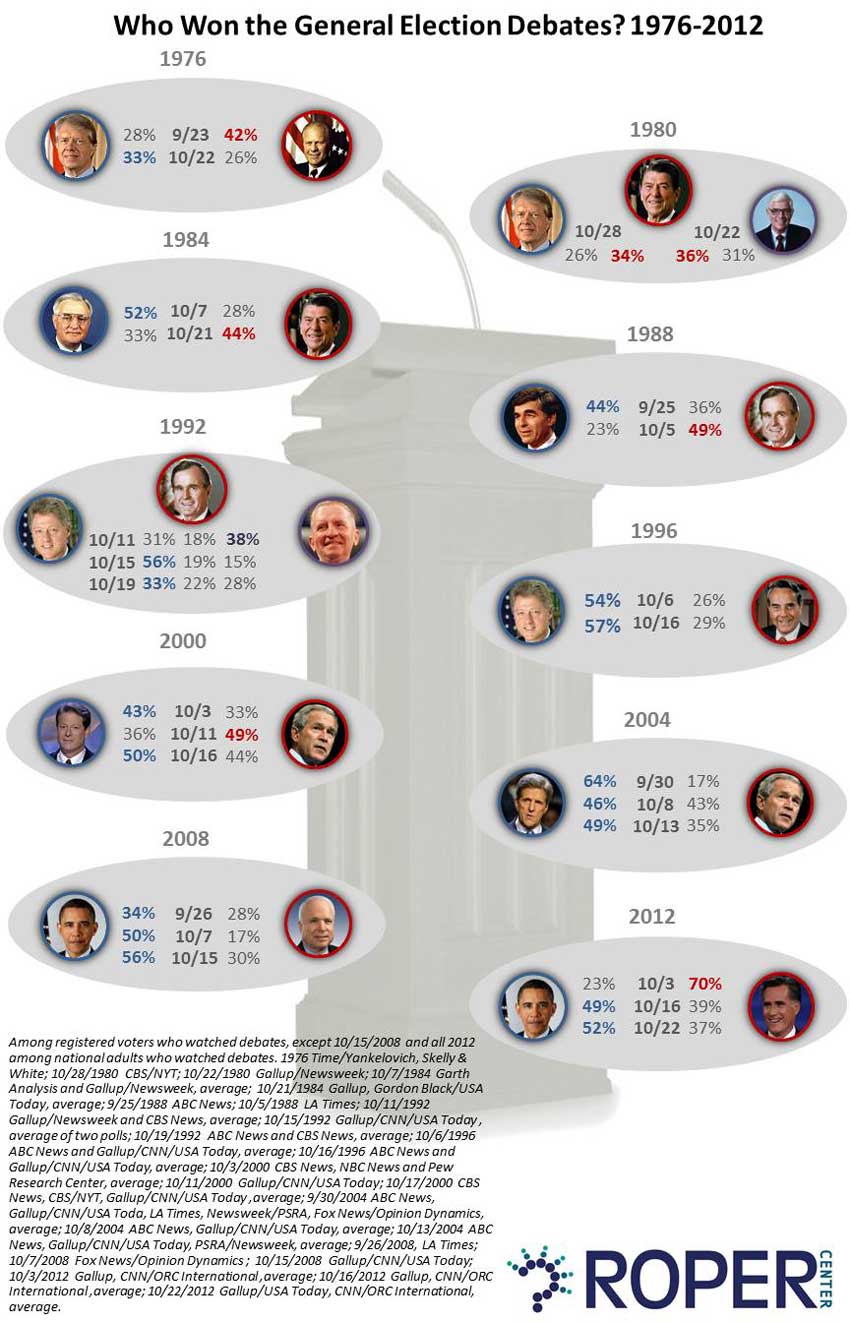 This comparison reminds us that debate success does not guarantee electoral success. Reagan won all his 1980 debates, as did Obama in 2008, but John Kerry swept the 2004 debates to no avail. Mitt Romney beat Barack Obama in their first debate by a whopping 47 percentage point margin, but lost the remaining two debates and ultimately the election. This year's extensive primary debate polling represents a new development in polling - until the 2012 election, pollsters asked about who won primary debates only sporadically. Winning the primary debates has usually portended nomination victory, though of course respondents do tend to highly rate the candidate they already favor. All rules, however, carry exceptions. Michael Dukakis lagged behind Jesse Jackson and Gary Hart, but still secured the Democratic nomination in 1988. And as John Sides noted at the Washington Post, though debates can provide a bump in the polls, the results are usually short-lived.

In the 2016 Republican primary debates to date, Donald Trump has proven to be a polarizing figure, topping both the best and worst ratings. Carly Fiorina's performance in the September debate was a clear winner, while Rand Paul distinguished himself in September as a top choice for the bottom position.

A CNN/ORC poll conducted after the first Democratic debate found 62% of Democrats or Democratic-leaning Independents who watched the debate thought Hillary Clinton was the winner, while only 35% said Sanders. This strong showing, however, did not appear to move voters into her column for the primary. The 2016 election has many more debates in store for voters. If precedent is followed, these debates will provide pundits with fodder for many columns and interested citizens with some insights into their potential leaders. It is unlikely, however, that any debate will prove to be the battleground on which an election was won or lost.