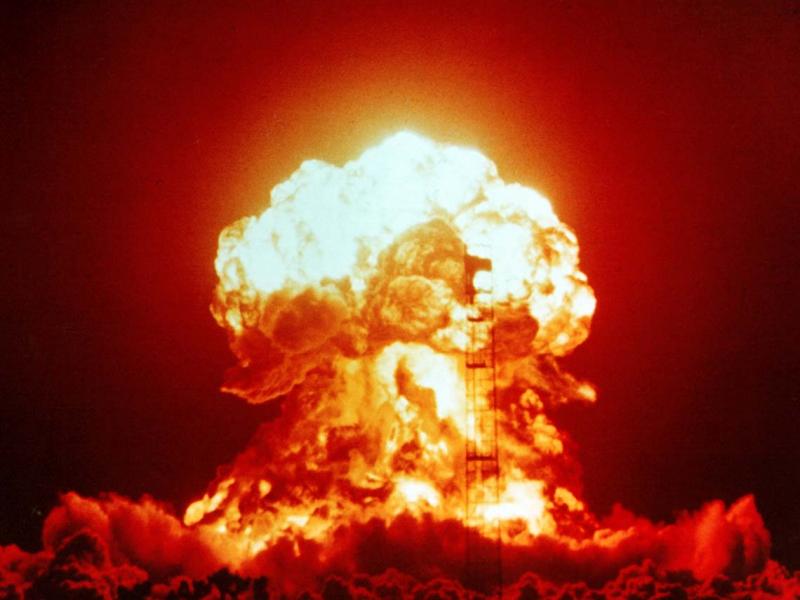 As the only nation ever to use nuclear weapons, America holds a unique position in debate over the use of nuclear arms. In August 1945 the U.S. obliterated the Japanese cities of Hiroshima and Nagasaki to bring WWII to a close and obviate the need for a prolonged and bloody US ground invasion. The following month, after the bombs’ power had been demonstrated, 4% of respondents in a NORC survey said they would not have used them at all, 26% only on uninhabited areas, and 44% on one city at a time. Twenty-three percent said they would have wiped out all Japan’s cities. Two decades later, 70% told a Harris poll that we did the right thing, while 17% were sorry, and in 1982 Harris found those numbers at 63% and 26% respectively. By 1998, a History Channel/Roper poll found 47% said dropping the bombs was the right thing to do, 26% wrong, and 22% somewhere in between. Most Americans still believe that it was the right thing to do, but time is eroding that sense of certainty.

A 1951 Gallup poll showed that 67% thought the US should use the atom bomb first if war began with Russia, but only 18% agreed with Barry Goldwater’s 1964 idea to use nukes in Southeast Asia. Two years later, in a NORC/Stanford survey about continuing the war in Vietnam, 22% said they would be willing to fight “an atomic war” with Russia to do so, and 30% were willing to fight China. In a 1979 ABC/Harris survey 41% favored using nuclear weapons in the event of a Russian attack on Western Europe, and 26% favored and 65% opposed using them if Saudi Arabia were attacked. In the same survey, however, only 20% of Americans thought the US would ever use nukes vs. Russia unless they did first. Seventy-two percent did not believe the U.S. would strike first.

The rise of concern over non-nuclear WMDs made the subject a bit more complex, and a 1991 NBC News/Wall Street Journal poll found 53% in favor of using tactical nuclear weapons in response to any Iraqi use of chemical or biological weapons in the first Gulf War, with 37% opposed. Post-9/11, a 2002 Zogby survey revealed 21% favoring the use of “strategic nuclear weapons” in the war on terrorism, while 71% opposed it. Five years later a Gallup/CNN/USA Today Poll found 27% were willing to use nuclear weapons against terrorist facilities, while 72% were not. Much as Pearl Harbor hardened US attitudes about attacking Japan, the September 11th attacks not surprisingly swung the pendulum in the direction of vengeance – and also made nuclear conflict seem more plausible.

While many believe that the specter of large-scale nuclear war is now behind us, not all Americans agree. A 2010 CNN/Opinion Research Corporation survey found that 12% think a nuclear war is very likely in the next decade, 26% somewhat likely, 29% not too likely, and only 32% said it was not likely at all. And as recently as last November, a 60 Minutes/Vanity Fair Poll found that 35% most fear a nuclear war putting an end to humanity, compared to 23% who worry about a deadly virus, 15% the Rapture, 15% global warming, and 8% an asteroid hitting the Earth. And to round out the subject, in a 2010 Pew survey 64% approved of Barack’s Obama’s declaration that the US would never use nuclear weapons against a nation that did not have them, but 30% did not want to take that option off the table.

The data reveal that around one in five Americans have just about always been in favor of at least the idea of using nuclear weapons as something other than retaliation for having them used against us, and at the height of the Cold War these numbers went as high as four in ten. While most Americans do not want their nation to use nuclear weapons first or believe that it ever would or should, this opinion is far from universal, and many expect it to have to make that decision sometime in the not-too-distant future.

Carl Brown, iPOLL Acquisitions Manager, has been with the Roper Center since 1999, and currently collects and prepares new polls for entry into the iPOLL system and selects poll questions for our daily Twitter and Facebook feeds. He previously worked on the now-retired JPoll system of Japanese poll questions and prepared Elmo Roper’s papers at the Dodd Center.