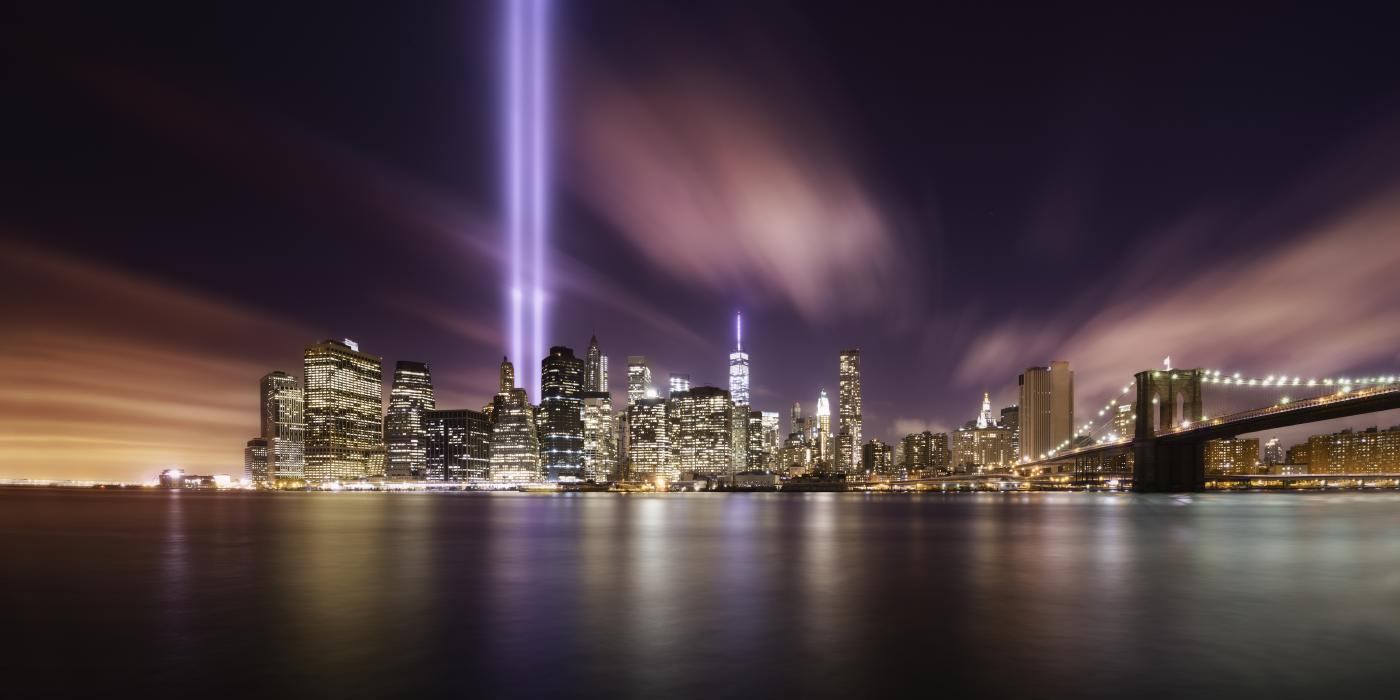 The terrorist attacks on September 11, 2001, which claimed nearly 3,000 lives, left an indelible mark on American society. As news of the unfolding tragedy spread, pollsters quickly mobilized to survey the public, to capture their reactions in real-time. In the months and years that followed, pollsters have measured opinions on many related issues, from fears about future attacks, to support for retaliatory action in the Middle East, to attitudes about increased security measures.

On this 20th anniversary of 9/11, the Roper Center turns to the data archive to highlight what surveys can tell us about U.S. public opinion toward the attacks, on that fateful day and during the two decades since.

Emotions in the Immediate Aftermath

On the day of the attacks on the World Trade Center, the Pentagon, and in Pennsylvania, an Ipsos-Reid poll asked 500 U.S. adults about what the events meant for the future. Most felt the world would never be the same. Nearly three-quarters of those polled (74%) said that the events would “fundamentally change things forever,” while only 21% said that “things will return to normal.” 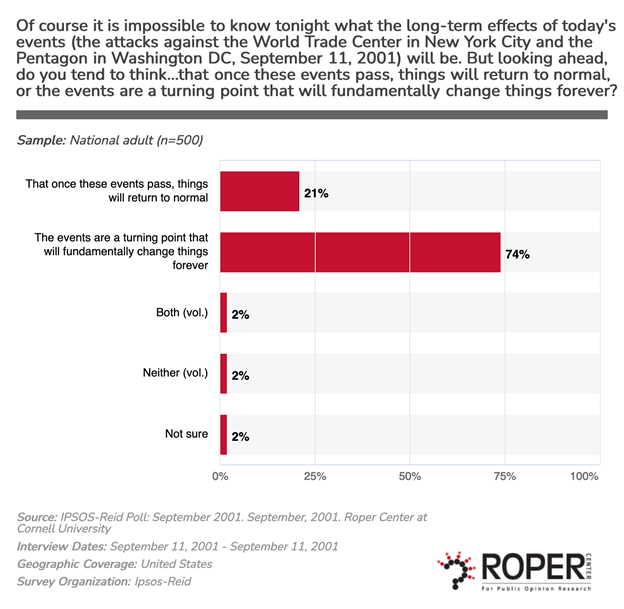 The public reported overwhelmingly negative feelings in the immediate aftermath. A CBS News/New York Times poll from September 11th to 14th, 2001, asked 2,000 U.S. adults to describe how they felt when they “first heard about the attacks.” Feeling shocked/stunned/numb was the most-common type of response, given by over one-third (35%) of those polled. In total, over 80% reported feeling negatively when they learned of the events—including feeling devasted, horrified, and violated. 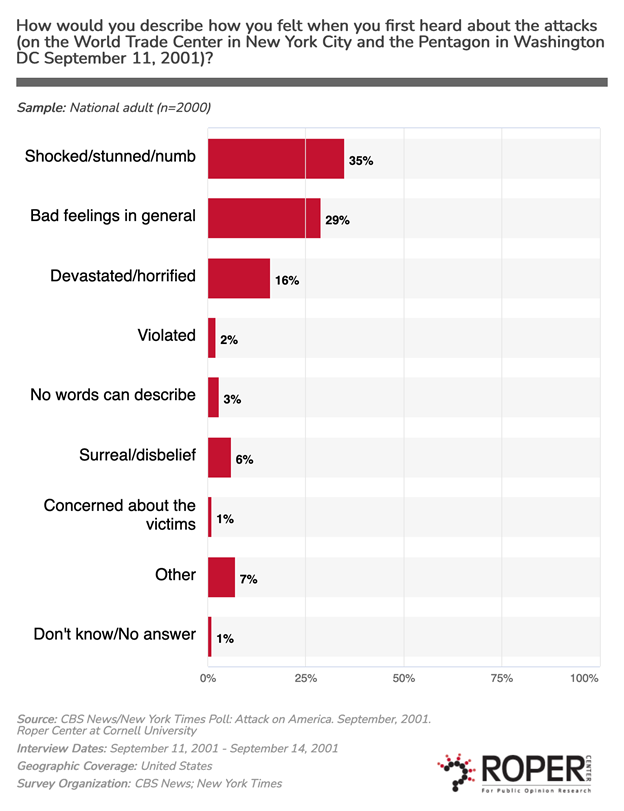 How did the attacks shape support for military action? A majority (57%) in the same CBS News/New York Times poll thought the attacks meant that the United States would go to war. Indeed, in addition to the 8-year war in Iraq, the attacks led to the nearly 20-year war in Afghanistan that only recently ended with the withdrawal of U.S. and allied forces from Kabul in August 2021.

While most thought the U.S. would go to war, did they feel that it should? In an October 2001 poll by CNN, Gallup, and USA Today, respondents overwhelmingly supported U.S. military action in Afghanistan, with 82% of those polled in favor and 14% opposed. 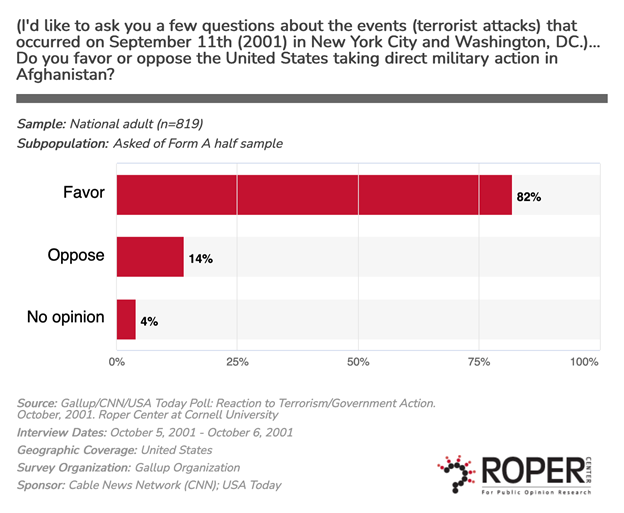 Nearly 20 years later, however, a war-weary public felt much differently. In an NBC News poll from mid-August 2021—conducted before the deadly suicide bombing at the Kabul airport that killed scores of people, including 13 U.S. service members—only 29% of those polled said that the war in Afghanistan was “worth it,” while 62% said it was not. 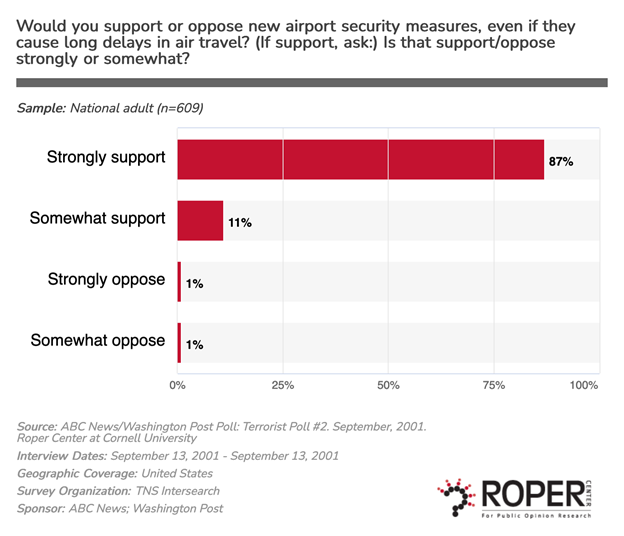 By the 5th anniversary of the attacks—when the Transportation Security Administration (TSA) had become a fixture of American aviation—support for new airport security measures remained high, with 62% supporting “strongly” and 24% supporting “somewhat,” and just 12% expressing any level of opposition. 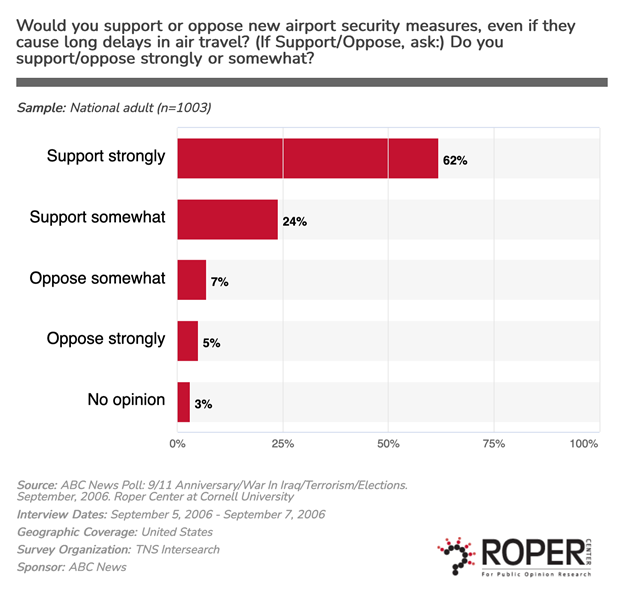 How Americans Have Felt In The Years Since

Over the years, polling suggests that Americans continue to feel strongly about 9/11. In a CBS News poll from June 2019, when asked to name the one national event that made them feel as much pride in the United States since the 1969 moon landing, 17% of those polled named 9/11—second only to the election of Barack Obama as the first Black president (named by 18%) and ahead of the election of Donald Trump as president (named by 9%).

Polls, it is often said, provide a snapshot of public opinion in time. The Roper Center is dedicated to preserving these 9/11 survey questions, alongside hundreds of thousands on other topics, for reflecting on the past—today and far into the future.