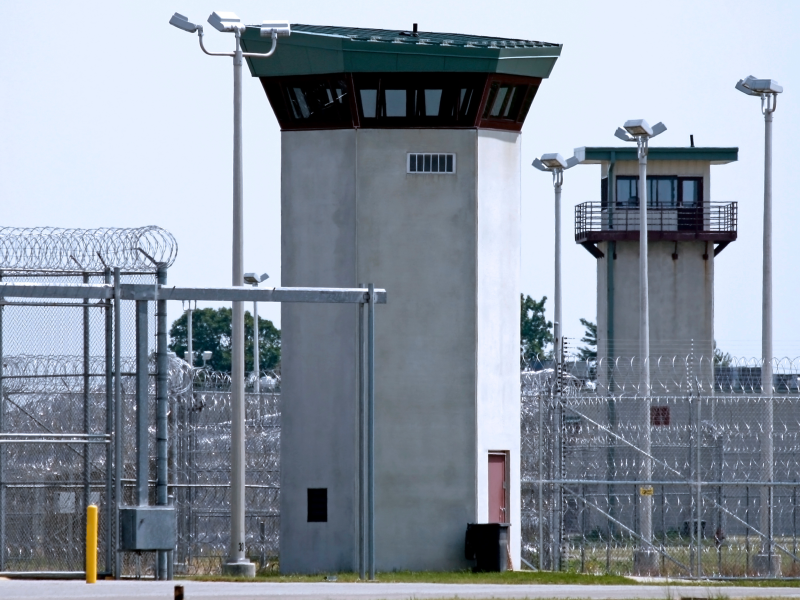 For the hundreds of rural communities dependent on prisons for jobs and local economic stimulus (over 70% of all prisons are in rural counties)[ii], this is a deeply troubling trend. The widespread assumption is that closing rural prisons has devastating economic and social consequences for the prisons’ host communities.

This belief is so strongly held that residents of rural prison towns have vehemently, and successfully in some cases, resisted attempts at shutting down their local prison(s). [iii] These attempts highlight the important role public opinion plays in the complicated dilemma of scaling back the carceral state through prison closures but also safeguarding rural economies reliant on prisons. Unfortunately, there is little to no public opinion data on public attitudes toward prison closures. A thorough search of the Roper Center’s iPoll database, the world’s largest collection of public opinion data, yielded no results.

However, the current wave of prison closures is an echo back to the 1980s and early 1990s when the U.S. was grappling with how to scale back the military-industrial complex in the wake of deindustrialization and the conclusion of the Cold War. In a similar fashion to prisons today, hundreds of military installments were scattered throughout the United States, predominantly in rural areas. Indeed, in the context of closures, prisons and military bases are strikingly similar. Both are government-operated institutions whose number proliferated in periods of unprecedented need. Both are large employers and important local economic institutions that have significant consequences when removed from their host communities.[iv] Given the dearth of public opinion data on support for prison closures, I use historical survey data on support for military base closures as a proxy and a point of comparison for the public’s attitudes toward prison closures today.

To consider this issue, I analyzed data from five surveys between 1986-1995 that asked questions about opposition to military base closures. While the question wording is different in each of these questions, examining all five together allows for some useful, though tentative, inferences. Figure 1 presents each of these questions along with the frequencies for each response category. Red bars represent opposition, and green bars represent support for military base closures.

Figure 1: Survey data on opposition to military base closures 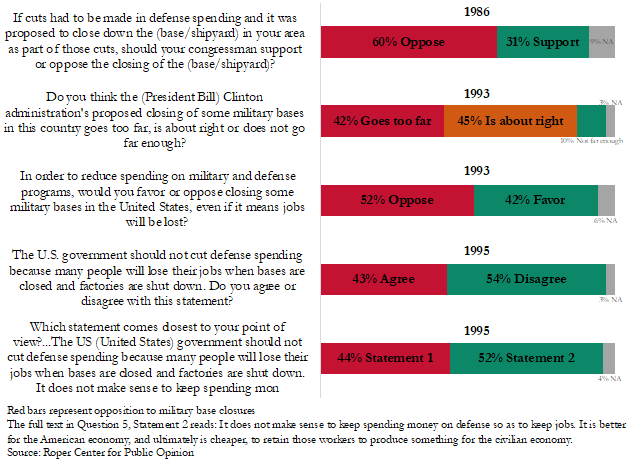 The topline frequencies in Figure 1 highlight a compelling over-time change in the public’s attitudes toward military base closures. In 1986, nearly two-thirds of Americans opposed closures (if those closures were in their community). Similar levels of opposition persisted in 1993 where 52% of respondents opposed closing military bases if it meant that jobs would be lost compared to just 42% in favor of closing bases. Between 1993 and 1995, however, a shift occurs and the public seemingly becomes more accommodating to closures. Only 43% agreed that bases should not be kept operational simply because people will lose jobs while 52% believed that it does not make sense to keep spending so much money on the military even if some jobs are lost in the cutbacks. In short, it appears that the economic consequences of closing military bases are difficult, but not impossible, hurdles for the public to overcome in coming to support closures.

To understand the heterogeneity across different groups’ opposition to military base closures, I also used logistic regressions to examine how opposition varies across key demographics.[v] Figure 2 presents the findings in odds ratios.[vi] Notably, the relationship between opposition to military base closures and each model variable is very similar in each survey. This is encouraging since it suggests these attitudes are relatively stable and inferences can be made despite limited data. In both surveys, Republicans are significantly more likely to oppose closings. A particularly noteworthy finding is that the relationship between Republicanism and opposition to closures is almost twice as strong in the second panel where the survey question includes a strong partisan cue by mentioning President Clinton. An important implication stemming from this for prison closures is that prison closures are likely to become a more partisan issue where they are framed in a partisan manner.[vii]

Figure 2: Correlates of opposition to military base closures 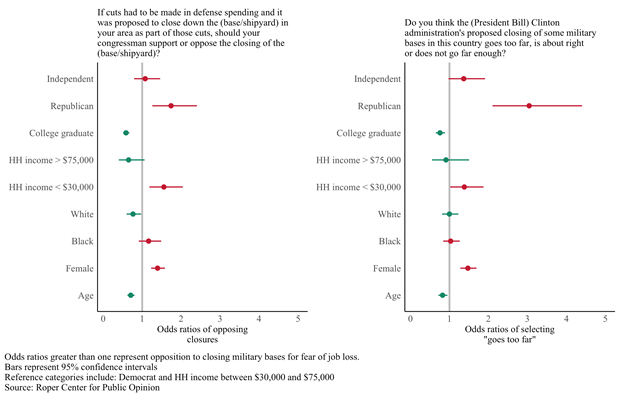 So what do these findings mean for the future of prisons and the carceral state in America? First, they indicate that garnering support for prison closures may be an uphill battle. Support for military base closures was quite low in the 1980s and early 1990s when framed in terms of their potential economic consequences. Encouragingly, however, support for closures increased significantly in the 1990s suggesting that it is possible to overcome the looming economic threats of closures in the mind of the public. Second, these findings highlight the partisan potential for prison closures. To date, prison closures have received relatively little national media attention and, given the growing bipartisan nature of criminal justice reform, are not rooted in a partisan framework. However, as these results suggest, that has the potential to change. Finally, as is common with many issues, opposition to closures is segregated by education and income level. Education and income are strongly correlated with a distrust of government institutions suggesting that that rural places with prisons will likely be resistant to talk of prison closures and worry the government may not have their best interests in mind.[viii]

As America moves into a new era of deconstructing the carceral state in part through prison closures, it is important that the role of public opinion not be overlooked.[ix] For lasting, meaningful change to occur the public must be willing (to a degree) to accept the potential local and economic consequences that prison closures entail. At the same time, avid reformers and abolitionists must also consider the burden of rural communities economically dependent upon prisons. Of course, there are the obvious limitation with my analysis here is that, despite their similarities, prisons are different from military bases and today’s social and political climate differs significantly from the period my data comes from. What is needed to give this issue the attention it deserves is survey research aimed directly at understanding the public’s attitudes toward prison closures. Until more detail is available, considerable efforts should be made to educate rural communities about the potential consequences of prison closures and provide innovative solutions to appease the fear facing so many rural communities regarding prison closures.

Jacob Harris is a 2021 Mitofsky Graduate Research Fellow, 2021 Kohut Research Fellow and a Ph.D. student in the Government Department at Cornell University. Jacob’s research interests broadly center around American politics, emphasizing criminal justice policy, public opinion, and political psychology. He has published his work on public opinion and police officers in the Journal of Criminal Justice. Another project which examines the intersections between religion, racial prejudice, and punitive sentiment toward criminals is currently under review. Jacob’s primary research motivation is understanding the political consequences of rural prison proliferation. In particular, Jacob is interested in how rural prison proliferation has entrenched punitive crime policy in the United States and contributed to the perpetuation of mass incarceration. Jacob enjoys a good book during his free time, playing tennis, and spending time with his wife and daughter.

[v] These analyses are based on the first two surveys presented in Figure 1.

[viii] Rainie, Lee, and Andrew Perrin. 2019. Key findings about Americans’ declining trust in government and each other. July 22. Available at: https://www.pewresearch.org/fact-tank/2019/07/22/key-findings-about-americans-declining-trust-in-government-and-each-other/

[ix] An important element of the public opinion toward prisons is the NIMBY (not-in-my-backyard) and PIMBY (please-in-my-backyard) dynamic. A discussion of that is out of the scope of this post but it should be a part of more detailed analyses of public attitudes toward prisons, particularly in rural places.