When the Wall Came Tumbling Down: The American Public and Berlin blog 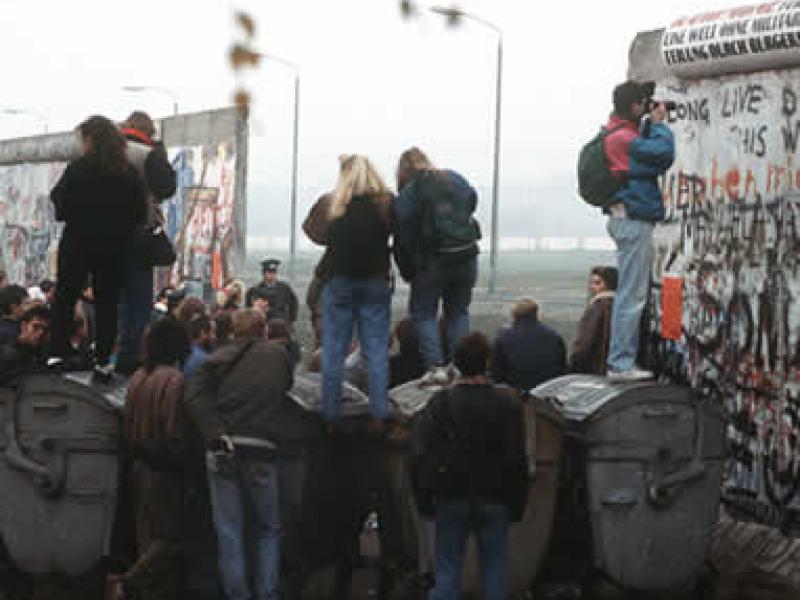 When the Berlin Wall fell twenty-five years ago this week, America rejoiced in what was widely seen as a new opportunity for peace in the world. But in the early years post-World War II, when the partitioning of Germany stood at the center of tensions between the Russians and the Western Allies, the public saw the future of Berlin lying dark under the threat of war. How the American people viewed the division and reunification of Berlin, from the Roper Center for Public Opinion Archives.

The beginnings: The Berlin Airlift

After the Second World War, Germany was split into four sectors under control of U.S., U.K., French and Russian authorities. Berlin, located in the Soviet Occupation zone, was also divided, requiring people and supplies to cross the Russian-controlled area to enter the western parts of the city. In the spring of 1948, Russian leaders announced that all cargo going in or out of West Berlin by rail or truck would be inspected. Allied forces began relying solely upon air transport for goods, but Russian planes harassed American and British ones, leading to a tragic air collision. Despite the difficulties, the American public was firm in their support for the city. Only 8% in an April Gallup poll said they wanted to pull out of Berlin, while 85% wanted to stay. Support for continued occupation remained high over the next months as the crisis worsened. In June, the Russians cut off nearly all access to West Berlin by blocking travel by rail and barge, as well as stopping supply of electricity and food from Soviet-controlled German areas. Within days, U.S. and U.K. planes began bringing the city food and coal. The Berlin airlift was a massive undertaking, but the American public did not sway in their support. As the blockade continued into the colder months, the need for supplies increased. By October, there were signs of some growing concern that the airlift was untenable - 22% in a NORC poll said the US would have to pull out sooner or later - but the majority (63%) thought American forces would stay in the city. When the Russians finally abandoned the blockade in 1949, the American public was uncertain of the airlift's role in this outcome. Twenty-three percent in a Gallup poll said the blockade ended because of the success of the airlift, but about one in ten suspected a trick of some kind, and 43% admitted they just didn't know.

Ready to fight: The Berlin Wall is built

Support for US engagement in West Berlin stayed steady at about 80% through the closing of the inner German border in 1952 and continuing tensions into the late 1950s. Americans' willingness to assist West Germany did not, however, extend to accepting its overflow of refugees. President Eisenhower's 1953 request to Congress to allow 200,000 people from East Germany and other parts of the Eastern zone to emigrate to the U.S. was disapproved of by 55% of the public in a Gallup poll. Only 36% approved. By July 1961, just before the Berlin Wall was erected, many Americans had come to believe that armed conflict over Berlin could be imminent. President Kennedy had said as much in a June address: "We will at times be ready to talk, if talk will help. But we must also be ready to resist with force, if force is used upon us." In a Gallup poll, 58% said they expected a "fighting war" if Russia insisted on controlling Berlin. And a majority of Americans were willing to take this step. An August 1961 Gallup poll, conducted as the Wall was being constructed, found that 57% thought that U.S. and allies should fight their way into Berlin if necessary.

By the 1970s, with the US engaged in an unpopular war in Vietnam, public willingness to fight to protect West Berlin dropped dramatically. Only 32% in a July 1971 Harris poll said it would be worth it to go to war if the Russians took over West Berlin. This proportion rose at the beginning of the Reagan presidency. A 1988 Americans Talk Security/Market Opinion Research poll found that 38% of Americans would support sending troops if Soviet and East German forces were to invade West Berlin, while 25% thought the US should use diplomatic pressure in such an event, 13% thought military supplies (but not troops) should be provided, and 19% wanted to stay out of it entirely.

The Fall of the Berlin Wall

In the end, neither troops nor military supplies were needed. The opening of the Berlin Wall was one of the most intently watched events of the late 20th century. Over eight in ten Americans in a Times Mirror/Gallup poll said they followed the story closely. Americans responded to the event with great optimism and excitement. Ninety percent in a BusinessWeek/Harris poll agreed it was one of the most encouraging signs for peace in the world in years. Though Ronald Reagan's call to "tear down this wall" has come to be iconic of his role in the last days of the Cold War, Soviet leader Mikhail Gorbachev was widely seen as the leader primarily responsible for the change. 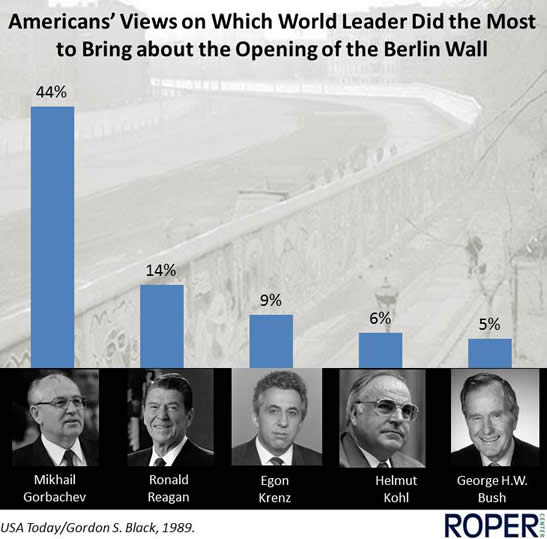