Ideological Self-Identification Before Democratic Collapse: The Case of Chile Before 1973

September 11 evokes tragic memories in the U.S. due to the terrorist attacks in 2001. Far south in the Americas in Chile, the date is associated with a different tragedy. In September 11, 1973, a bloody military coup interrupted one of the longest running democracies in the world. That day, the Palacio de la Moneda (the Presidential Office) was bombed, the democratically elected President Salvador Allende died, and General Augusto Pinochet inaugurated an authoritarian regime that would last until 1990. With this coup, Chile joined the majority of Latin American countries in the 1970s in rule by an authoritarian regime. 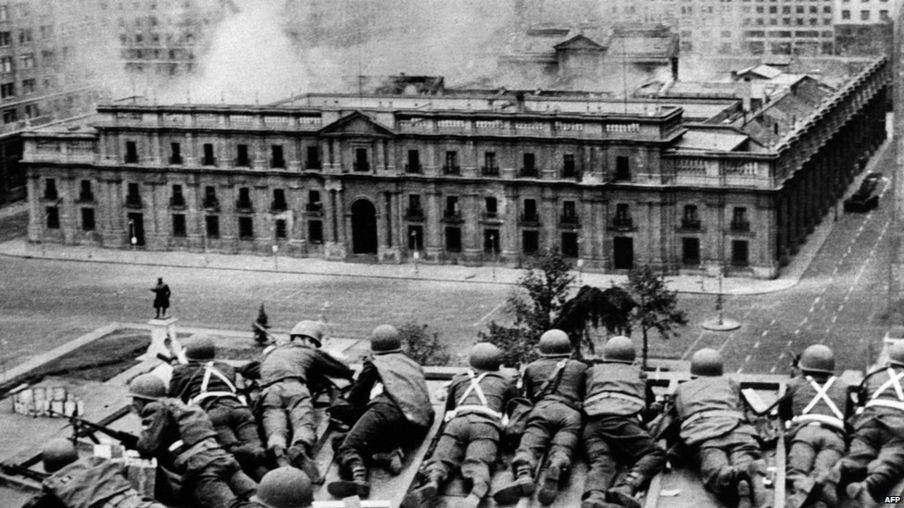 Often, analysis of the causes and effects of military coups are focuses on macro factors such as economic, political, international conditions that favor the collapse of democracy. The literature rarely touches public opinion trends in these contexts.[1] The Roper Center’s collection of historical Latin American polling provides an invaluable resource for facilitating new insights about the political environments leading to military coups. In the case of Chile, the Roper Center holds more than forty public opinion surveys from 1956 to 1973. These datasets offer information on individual voting preferences, government support, party identification, economic evaluations, ideological preferences, and many other political, cultural, and social variables.

Here we present data on political ideology to show how the population identified with the political Left, Right, or Center before 1973.[2] The intense political competition at this time saw parties on the Left, Center, and Right alternating in government and opposition until the collapse of democracy due to a right-wing military rebellion. Looking at the variation of ideology at the population level can increase our understanding about Chile in this period and about political outcomes such as regime transition, as well as raise more questions about political behavior.

Figure 1. Ideological identification of individuals in metropolitan Santiago from 1957 to 1973 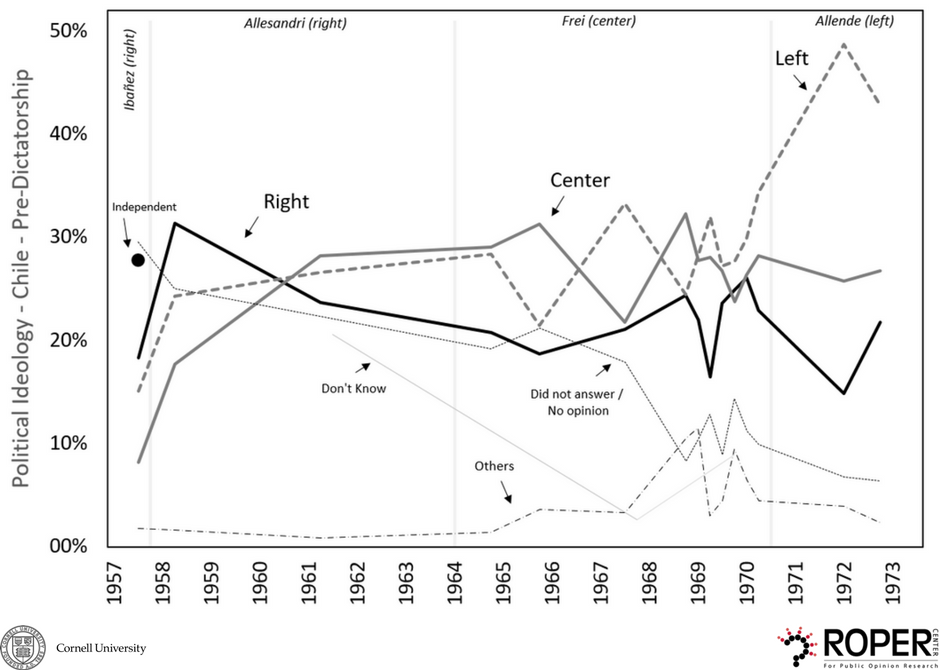 Between October 1957 and February 1973, Chile had four presidents from three different political ideologies: Carlos Ibañez del Campo (Right, 1952-1958), Jorge Alessandri (Right, 1958-1964), Eduardo Frei Montalva (Center, 1964-1970), and Salvador Allende (Left, 1970-1973). Figure 1 shows how people identified themselves with political ideologies in public opinion polls in those years. Respondents answered to questions such as “Which of the following political groups do you prefer?”, “Do you feel closer to the Right, Left, or Center?”, or “Where would you classify yourself?” The answer options offered across time were “Right”, “Center”, and “Left”. In addition, other answer options—slightly less consistent over time—were “Others”, “Did not answer/no opinion”, and “Don’t know”. [3] The data come from 17 surveys carried out in metropolitan Santiago, the capital, political center, and major urban concentration of the country representing around of 35% of the Chilean population in those years.

The figure reveals some interesting trends. Responses move from a relative balance among ideologies with a slightly higher number on the conservative Right, to a dominance of the Left. In 1957, most respondents identified with the Right, followed by the Left and Center.[4] Not surprisingly, a right-wing candidate, Alessandri, was elected president in 1958. From July-August 1961 to March 1966, pluralities of respondents chose Center as their ideology and, again, this growing identification in the population correlates with the victory of a candidate from the same ideology, Frei, in the 1964 presidential elections.

The Left and Center then alternated as dominant ideologies until 1970, when most people identified with the Left and a leftist president, Allende, was elected.

President Salvador Allende speaks to his supporters in 1970. Source: Clarin 2016

After 1970, more sectors of the population continued identifying with the Left. Only in this presidential term, a political ideology at the population level actually grew significantly in the direction of the ideology of the government. After two years of Allende’s term, the April-June 1972 survey indicates that 49% of respondents identified with the Left, representing almost half of the population in Santiago and 16% more than in March 1970. The Center was second with 26% and the Right was third with 15%. In the last survey available for the period, in February 1973, the Left slightly declined but continued to be the main ideology with 43%, followed by the Center and Right, which grew to 27% and 22% respectively. Unfortunately, we do not have more surveys available to observe the ideological distribution right before or after the military coup in September 11 of 1973, because CEDOP/Hamuy stopped conducting survey research.

The growing ideological identification with the Left was associated to growing electoral support to Allende’s party. The New York Times reported in 1971 that Allende’s Unidad Popular improved its electoral performance in the municipal elections of that year. In addition, in the legislative elections of 1973 the party gained more seats compared to 1970.[5]

Having both more people identifying with the Left and supporting Allende in elections is puzzling, given the economic conditions during Allende’s era (1970-1973). If the economy is going well, more sectors within the population would be expected to identify with the ideology of the government and reward the governing party in elections. In contrast, if the economy is performing badly, more sectors would move away from the government ideology and punish the incumbent. However, ideological identification and electoral behavior run contrary to expectations here. Economic indicators deteriorated from 1970 to 1973. Economic growth went from 3.6% to -4.3%; inflation moved from 36% to 605%, and there was an annual increase of real wages from 8.5% to –38.6%.[6]

Undoubtedly, more research is needed to empirically assess why the Left—and government electoral support—grew in this period. Perhaps government policies such as increased social spending, wage adjustments, and other redistributivist policies increased identification with the Left. Possibly increasing political polarization between leftist and right-wing forces made more sectors identify with the government.[7] In any case, these survey data indicate an interesting line of inquiry for future exploration. 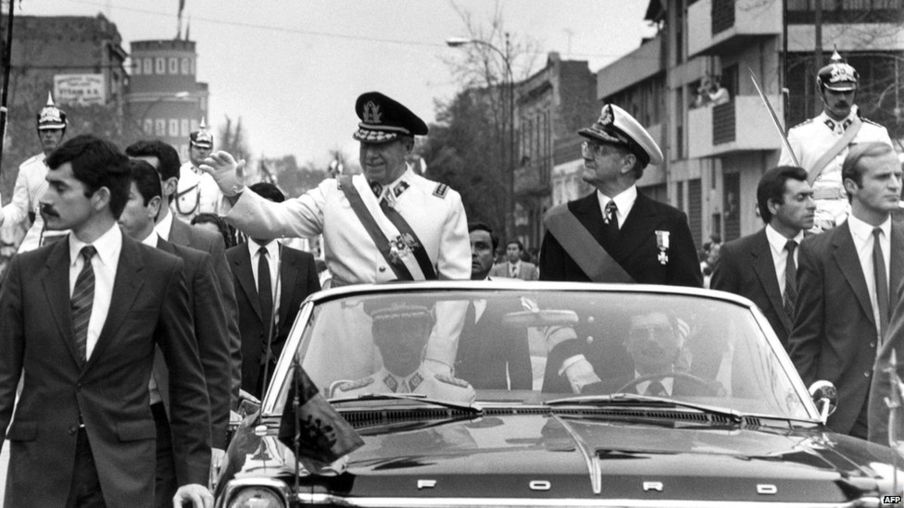 General Augusto Pinochet in a parade after taking power. Source: AFP in BBC 2013

Another interesting trend relates to political polarization. One of the causes often cited in Allende’s fall is the extreme polarization between the government’s party and the opposition, which led to political conflict, executive-legislative gridlock, and government instability. But was the population equally polarized? If this were the case, one would expect to find a declining number of people who identify with the Center due to an increasing identification with the Left and Right. In a polarized society, people move from the Center to the extremes. However, these surveys suggest otherwise. While the Left grew, the Center remained relatively stable, and the Right declined from 1970 to 1972. Moreover, it seems that the Center was not the sector that lost followers to the Left, but that the Left grew out of those who chose not to answer the question before (which declined from 30% to 6% between 1957 and 1973). Thus, while studies on the period indicated that political polarization did happen at the elite level, these surveys seem to indicate that the population was not equally polarized, which raises questions about how polarization at the macro and micro levels relate to each other.

Perhaps the inclination of the Chilean population to the left, the better electoral performance of Allende’s party in those years, and the prospects of more and more redistributive government measures, worried economic elites, leading them to think that they would not be able to remove Allende from power by following democratic means and therefore bringing them to support a military coup. Care must be taken in over-interpretation. The data presented here only represent views from metropolitan Santiago, and can not be extrapolated to represent the entire population. But, by exploring these surveys, much can be gained in terms of understanding popular attitudes and preferences in the context of political conflict in democratic settings, and how they may influence political outcomes such as military coups and transitions to authoritarian regimes.

Jose Tomas Sanchez is a PhD Student in the Government Department (Cornell University). He was a Roper Center Kohut Fellow in the summer of 2017. To learn more about the Kohut Fellowship, click here.

[^2] These data were collected from the websites of the Roper Center at Cornell University (https://ropercenter.cornell.edu/). The organizations responsible for the studies were CEDOP/Hamuy Archive for the period 1966-1973. All the surveys were conducted in Spanish.

[^3] There were other options such as “none”, “no data”, and “independent” that appeared fewer than three times. Only “independent” is shown in the figure because it reached 27% and was offered only once.

[^4] In the first survey of October 1957 the number of respondents choosing not to answer the question was 29%, those answering “Independent” were 27%, and both were higher than any of the three political ideologies, Left (15%), Center (8%) or Right (18%). Perhaps it was because political surveys were just beginning in Chile and people were suspicious, or because “Independent” was offered as an option only in that survey. The case is that only thereafter most respondents placed themselves within one of the three ideologies, although the option “Did not answer/No opinion” was relatively high until the end of the 1960s.

[^6] Larrain, Felipe and Patricio Meller. 1991. “The Socialist-Populist Chilean Experience.” in The Macroeconomics of Populism in Latin America. Ed. Rudiger Dornbusch and Sebastian Edwards. Chicago: The University of Chicago Press.