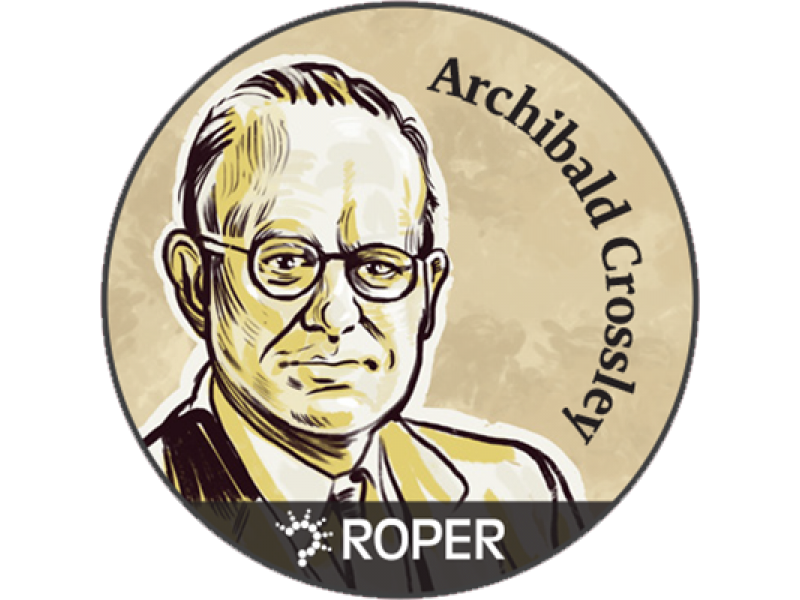 Archibald Crossley (1896-1985) was a pioneer in public opinion research who was instrumental in making public opinion polling what is today by developing methodological techniques as well as standards and ethics within the discipline.

Crossley attended Princeton in 1917, but left after one year to start a research department for J.H. Cross Advertising Agency in Philadelphia and subsequently developed new methodologies for opinion sampling. After four successful years, Archibald left Cross Advertising to become the Director of Research for Literary Digest, an influential national magazine.

The business experience Crossley gained from his time at Cross and Literary Digest gave him the expertise and confidence to start his own company, Crossley Inc., which quickly became a leader in radio broadcast market research. In 1930, Crossley Inc. received a Harvard University Award for devising a radio audience measurement.

During the first half of the 1930s, many market research techniques were used to ascertain public views on many political issues. For the 1936 presidential election, Crossley and his associates were hired by Hearst Publications to conduct polls. Crossley, along with contemporary pioneers Elmo Roper and George Gallup, correctly predicted a landslide Roosevelt victory, going against his former employer Literary Digest. This success launched public opinion research to the forefront of social science.

In 1944, Crossley, along with Roper and Gallup, was invited to join the Board of Editors of Public Opinion Quarterly in an effort to unite the academic and commercial sides of survey research. This eventually led to the establishment of the American Association of Public Opinion Research (AAPOR). But disaster struck in 1948 when Crossley, Roper, and Gallup all incorrectly predicted the presidential election. Crossley and other leading AAPOR members met in Iowa City after the election in an effort to identify how to fix their error and save their field. This meeting led to the establishment of a standard for public opinion polls which has since helped the industry regain its reputation. The Iowa City meeting also led to the adoption of probability sampling as a standard for survey research.

Crossley remained an active member of AAPOR until 1952. In 1954, he merged his company with Steward, Dougall & Associates to create Crossley Surveys, which was active in market and survey research. In 1962, Crossley retired from full time work but still did occasional jobs in public opinion research. One such case was in 1967, when President Lyndon Johnson commissioned Crossley to conduct a private poll in select areas, including Strafford County, New Hampshire, where Johnson was still popular. As Johnson’s ratings declined along with the situation in Vietnam, he leaked the Strafford County results to the public to bolster his public image. Crossley, aware that the results from Stratford County, New Hampshire were not indicative of the entire poll, released the full results of the poll to the press.​