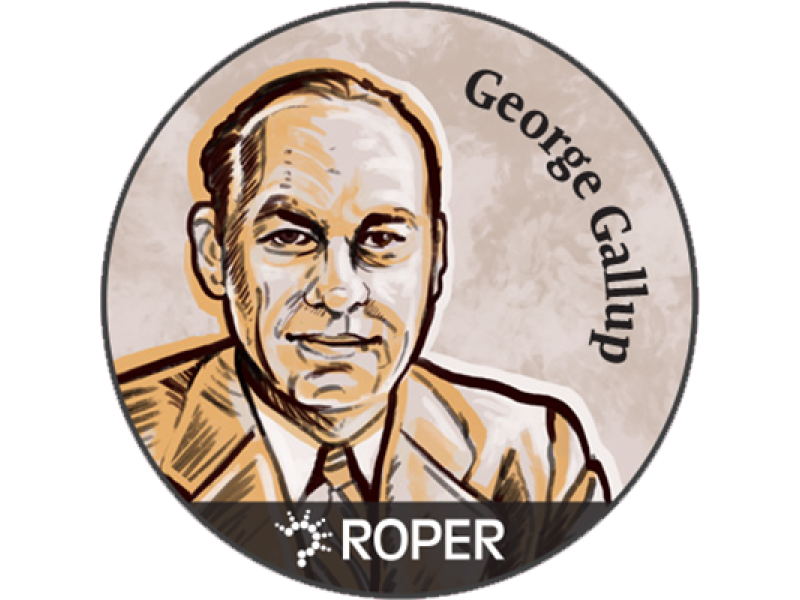 George Gallup (1901-1984) was an American pioneer in the field of public opinion. The polling organization he founded became synonymous with public opinion research.

A native of Iowa, George Gallup studied journalism as an undergraduate at the University of Iowa. He later attained his Ph.D. there with a thesis titled “An Objective Method for Determining Reader Interest in the Content of a Newspaper”. After teaching journalism at Iowa, Drake, and Northwestern universities, George joined Young and Rubicam, the largest advertising agency in the country, at 31. As the Director of Research, George developed several methods to measure nationwide radio audience as well as advertising effectiveness. In 1932, George correctly predicted, in the first scientific political survey ever conducted, that his mother-in-law would win Secretary of State in Iowa. This triumph led him to establish the American Institute of Public Opinion in 1935, a polling organization that conducted the Gallup Poll, a weekly survey.

Gallup’s breakthrough moment was the 1936 presidential election. His organization correctly predicted that Franklin Roosevelt would win the Depression Era election while The Literary Digest, an influential national magazine, incorrectly predicted Alf Landon would win. By systematically sampling the public to success, Gallup quickly gained credibility, rising to the top of the new field of public opinion.

Yet twelve years later, Gallup’s organization suffered its heaviest defeat when it incorrectly predicted that Thomas Dewey would comfortably win the 1948 election over Harry Truman. George Gallup believed that this error was due to ending their polling three weeks prior to the election and learned from his mistakes. By 1958 George grouped the multiple polling operations he had started, including American Institute of Public Opinion (Gallup Poll) and British Institute of Public Opinion, into The Gallup Organization, which still operates today.

George Gallup worked closely with Elmo Roper on establishing the Roper Center for Public Opinion Research. His generosity in archiving his data at the new institution ensured that the collection would be central to any study of the history of public opinion in the future.

Through the 1960s and 1970s, Gallup led the growing polling industry in an expansive growth of both size and content. By 1975, it was estimated that 1 in 9 Americans over the age of 19 had been surveyed. The Gallup Poll’s findings had become a national commodity for the news media. Some of the survey questions Gallup designed, such as “What is the most important problem facing the country?” had become staple polling questions and provided essential data on trends in American opinion. During this time, George also led the Gallup Poll in expanding their questions to get America’s pulse on more than just policy issues. Surveys on consumer preferences, religious beliefs, and political ideology became an integral part of Gallup’s work to lead the industry with the most comprehensive survey data.

As George gained a reputation for being one of America’s leading pollsters, he attracted the attention of many politicians. During the 1960s, JFK, George Romney, Nelson Rockefeller and other consulted with Gallup on their presidential campaigns.

​Gallup’s organization conducted private polls to give candidates insight into their chanc​e of success and the ​issues America wanted them to focus on. However, this relationship soon came under criticism, with some charging that Gallup’s organization was using these private polls to influence candidates. Gallup responded by suggesting that if politicians pay attention to poll results they are simply acclimating themselves with the views of the American public, not being intentionally influenced by pollsters. Nonetheless, The Gallup Organization ceased conducting private polls for politicians and has since stressed the nonpartisan nature of their work.

In the years since, Gallup’s polls have had a significant impact in both the public and private sphere. Gallup Polls have given politicians data on public support of policy measures, helped corporations​​ decide how to best market their products, and provided sociologists with insight into what America does with its leisure time.

Serving as the Chairman of the Board of the Gallup Organization until his death in 1984, George always sought to capture America’s opinion on a wide range of topics because he believed that many of the problems we faced in society could aided and solved by understanding the attitudes and opinions of the American individual. As a leader of the public opinion industry, George pioneered the concept that today’s opinion is tomorrow’s decision.

The Gallup data collection is part of the Roper Center archive.