Government aid to private schools, vouchers, private educational contractors - the lines between public and private in the world of education are ever-shifting. Policies that push these boundaries are often challenged in both the legal system and the court of public opinion. A look back at how Americans have seen the relationship between the public schools and private education:

Tax breaks and credits and vouchers, oh my!

Another approach to funding private school with tax dollars emerged in the 1970s: tax breaks for parents paying private school tuition. Although a 1979 CBS News/NYT poll found 60% favoring this idea, the public quickly soured on the notion. A majority disapproved in nearly all polls through the 80s and 90s, though a great deal of variation in the level of opposition can be seen depending on the language used to describe both the schools and the tax advantage.

As the idea of tax credits, or vouchers, became more widely discussed, wording and framing continued to affect responses. A twenty-year Gallup trend which asks in general if respondents favor "allowing students and parents to choose a private school to attend at public expense" has found fairly substantial majority opposition in most years.

But questions about "vouchers" specifically, which have been asked in some form since the 1970s, tend to find the country divided fairly evenly. The most recent question on vouchers in a 2013 Gallup poll found a relatively high proportion (58%) saying they would vote for such a system. However, this question used the softer phrasing ‚"government-funded" versus the stronger "tax-funded" used from 1996-2005.

Since the early 1990s, some public school districts have experimented with contracting with private educational companies to hire teachers, develop curriculum, and manage schools. The earliest polling on this idea found opposition. In a 1982 Roper Report poll, 63% of the country thought it was a bad idea to have the government subcontract to private companies for the running of public schools. A 1999 Gallup/Phi Delta Kappa poll found a slim majority of 54% opposed to having private, profit-making corporations contract to operate schools within certain jurisdictions. A Public Agenda Foundation in the same year asked the likely results of such programs. Nearly half (48%) of Americans thought education companies hired by public schools would care more about cutting costs and making money than delivering a quality education, while only 36% thought such companies would work hard to deliver a quality education and make sure kids learn because otherwise they lose business. A Gallup/Phi Delta Kappa poll series asked the public in 2002, 2006, and 2007 if they would favor a plan in which your local school board would contract with private, profit-making corporations to run the entire operations of the public schools in your community. Support never reached one-third.

Who supports these programs?

In the early years of this debate, support for public aid for private schools was much higher among Catholics, whose parochial school system at its peak educated as many as one in eight American students. The shift in policy discussions from direct aid for private schools to parental tax breaks and vouchers coincided with a major decrease in Catholic school attendance. Catholic support for proposals involving the use of tax money for private school education has drifted downward somewhat, while stronger support among Protestants and other Christians for these more recent policy prescriptions has essentially eliminated religious difference on these issues. 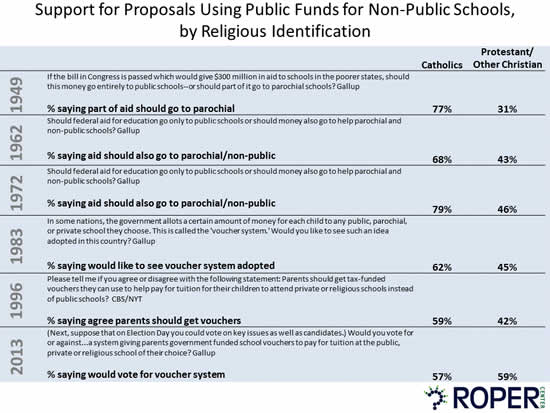 The Republican party's educational platform prioritizes school choice and the programs that facilitate it, while the Democratic party has rejected the idea of vouchers and similar systems. Party identification, however, does not seem to drive attitudes about this issue among the public. In a 2013 Gallup poll, 55% of Democrats and 60% of Republicans supported said they would vote for school vouchers if they had the chance to vote on issues as they do for candidates. Large variation was shown, however, by respondent age. While 75% of those aged 18-29 supported a voucher program, only 44% of those 65 and over did. Older people were also much less likely to support the idea of public schools contracting with private companies for the running of the school system. The greater willingness of younger people to blur the lines between the public and private in education may portend more such policies in the future.