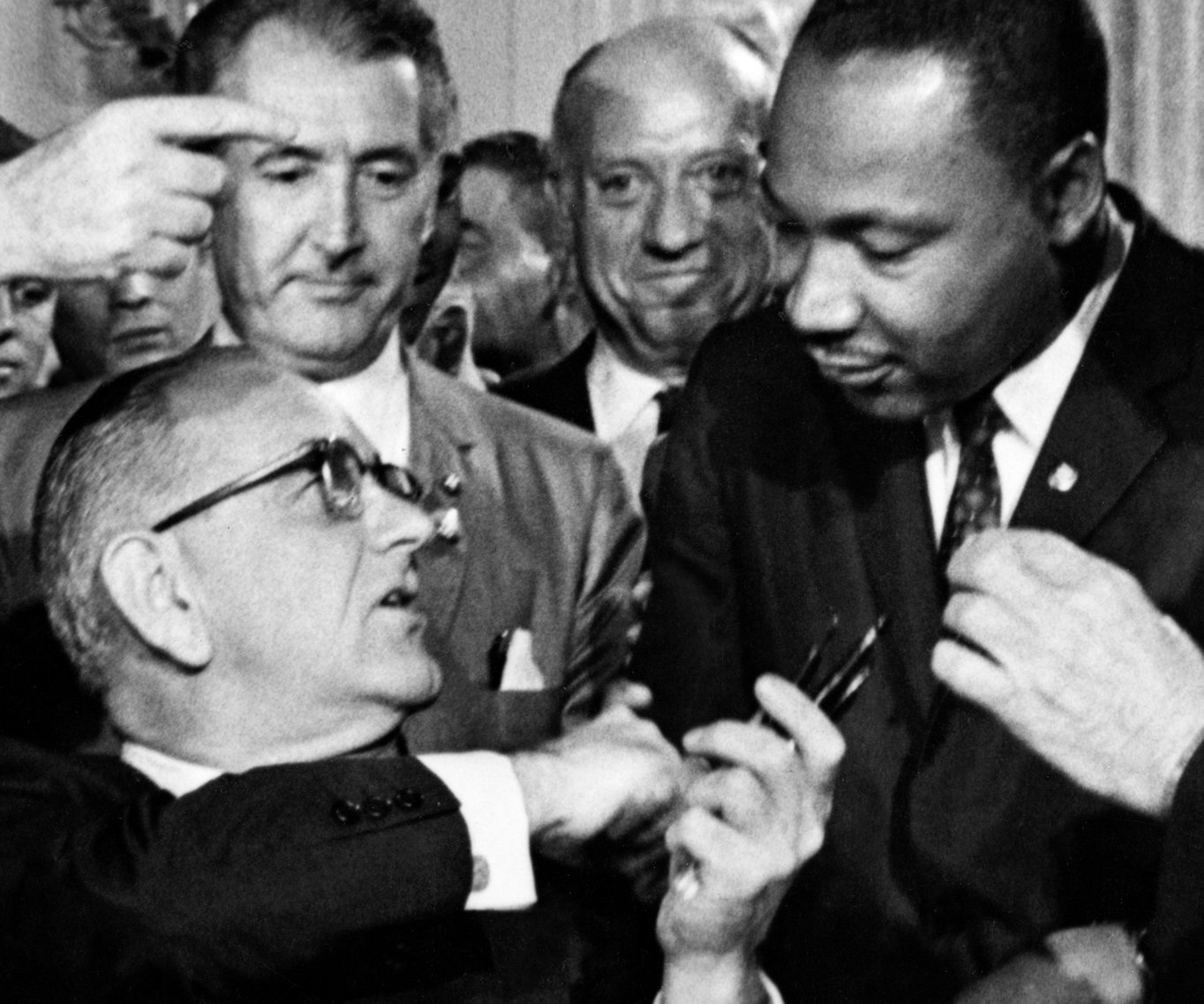 Likely the most sweeping civil rights legislation since Reconstruction, the Civil Rights Act of 1964 ushered in a new era in American civil rights as discrimination on the basis of race, color, religion, sex or national origin was outlawed. By signing the law into effect on July 2, 1964, President Johnson also paved the way for additional school desegregation and the prohibition of discrimination in public places and within federal agencies.  Public opinion polls held in the Roper Center for Public Opinion Research archives reveal changing attitudes about race in the U.S., exposing how divisive racial issues were at the time, how much improvement there has been since the Act – and how very far the country still has to go.

The effects of the Civil Rights Act, and improvements in race relations more generally, are apparent in a March 2014 CBS poll, which finds that 8 in 10 Americans think the act has had a positive effect on the country and only 1% thinking it has been negative. Additionally, the poll also found that 60% of whites and 55% of blacks think that the state of race relations in America is good.

However, these fairly positive assessments are relatively new. The U.S. public has been asked o give their overall assessment of race relations in the U.S. regularly since 1990. A low of 24% of whites and 21% of blacks said race relations were generally good in 1992, the year of the Rodney King riots. Not until the year 2000 did a majority of either whites or blacks say race relations were generally good. Public opinion toward minority civil rights was even more unfavorable in the past. According to Paul Herrnson, a Professor of Political Science at the University of Connecticut, “Issues related to race relations and civil rights challenged Americans prior to and during the drafting of the U.S. Constitution, throughout the Civil War period and the sixties, and they continue today. Despite the progress that has been made, many have yet to fully embrace the notion that all Americans are entitled to the same civil rights and liberties.” 1960s Climate for the Passage of the Civil Rights Act

Race relations in the first half of the 1960s were toxic in many parts of the country. These years saw numerous sit-ins, marches, protests, and riots in the deep south from Greensboro, North Carolina to Birmingham, Alabama as well as forced integration at the University of Mississippi and racial violence by white supremacist leagues in Neshoba County, Mississippi. In 1963, the March on Washington saw the now famous “I Have a Dream” speech be given by Martin Luther King Jr. and in the following year, the poll tax was abolished through the 24th Amendment. A sign of the times, in 1963, a Gallup poll found that 78% of white people would leave their neighborhood if many black families moved in. When it comes to MLK’s march on Washington, 60% had an unfavorable view of the march, stating that they felt it would cause violence and would not accomplish anything.

Source: Harris Survey August 1964: “Looking back on it now, would you say that you approve or disapprove of the civil rights bill that was passed by Congress last month?”

In the months leading up to the bill being signed on July 2, there was support for the act, but still a third opposed the bill. One month after its passage, when the implementation phase began, support was just more than 50%, with nearly 1 in five voicing uncertainty about the bill.  The civil rights movement itself was viewed with suspicion by many Americans. In 1965, in the midst of the Cold War, a plurality of Americans believed that civil rights organizations had been infiltrated by communists, with almost a fifth of the country unsure as to whether or not they had been compromised. Source: Institute for International Social Research and the Gallup Organization, Hopes and Fears September 1964: “Most of the organizations pushing for civil rights have been infiltrated by the communists and are now dominated by communist trouble-makers. Do you agree with the statement or not?”

An examination of the legacy of the Civil Rights Act of 1964 indicates that it has taken several decades for the Act’s effects to be fully felt. The 1980s saw that new generations of Americans believed that the Civil Rights Act had indeed worked. Ninety-two percent of respondents in a 1984 Attitudes and Opinions of Black Americans Poll stated that the civil rights movement had improved the lives of the black community.

However, this is not to say that this period was without some controversy in civil rights.  The drumbeat for school integration through busing began in the 1970s and the issue persisted through the 1990s.  While support increased nationally from 19% in 1972 to 35% in 1996, the issue reflects a fragile state of race relations at the time as well as a significant divide between the races, something that a quarter of a century did not solve. Eight-six percent of whites were opposed to busing in the early 1970s and by 1996 that had shifted to two-thirds opposed.  Among black respondents a majority in nearly every year favored busing and only 39% opposed in 1996. Source: National Opinion Research Center, General Social Survey 1972-1996: “In general, do you favor or oppose the busing of Negro and white school children from one school district to another?”

The 1990s saw the issue of civil rights once again bubble to the surface of American society as race riots erupted in Los Angeles over the Rodney King incident in which white police officers were acquitted after being videotaped beating a black man. President Bush signed a new civil rights act into effect in 1991 which shored up measures to prevent discrimination in the workplace. This act coincided with a Gallup Poll in June 1991 finding that 58% believed the black community had been helped by civil rights legislation. As the thirty year anniversary approached of the 1964 Civil Rights Act, a Gallup/CNN/USA Today Poll in 1993 found that 65% believed the civil rights movement had had a significant impact on American society. By 2008, the Pew Research Center found 53% of whites and 59% of Black Americans saying that “the civil rights movement is still having a major impact on American society.” Source: CBS News/New York Times, May 1990-March 2014: “Do you think race relations in the United States are generally good or generally bad?”

Polls on the state of race relations in the country, as a whole, suggest that things have been improving since the general question was first asked in May 1990, albeit not a steady incline. Those who claim relations are bad have declined substantially since a high point in 1992 at 68%, during the Rodney King riots.  Looking at these surveys by race, the trend indicates that whites and blacks alike believe race relations have been improving over the last twenty years. However, there still exists a gap between the races with whites believing there to be a better state of race relations than blacks. In 2011 there was a 30 point gap between the two groups, but by 2014 the margin had narrowed to its closest point since 1992. As of March 2014, 60% of whites and 55% of blacks believe race relations to be good. According to Herrnson, “Although things have been trending in a positive direction, the evidence suggests that change comes slowly and public opinion is sensitive to politics and other events.”

Polls measuring opinion on employment opportunities for whites and blacks over time document the different views of the races. The Gallup Organization has periodically asked a question comparing the opportunities that blacks have at attaining jobs compared to whites.  The results over time show an even greater gap than exists on the general view of race relations in the country—since 1978 blacks have consistently been much more likely to say they do not have the same opportunities as whites than the general public. In the latter part of the 2000s, America once again questioned whether it was ready for a black president. With Barack Obama running on behalf of the Democratic Party, the time appeared to be right, and public opinion data backed up this sentiment. Support for voting for a black candidate had been steadily rising for several decades and in 2008, history was made. With public opinion surveys conducted since 1996 reporting 9 in 10 Americans would vote for a black candidate if they were qualified, Barack Obama won the 2008 and 2012 presidential elections in what many have considered a significant step forward in race relations.  An outcome that would have been simply impossible in 1964 when the Civil Rights Act was first passed had now become a reality.

On the eve of the 50th anniversary of the act, surveys conducted in March 2014 by CBS News found that 52% of America believes that we can totally eliminate racial prejudice and discrimination in the long run and that 78% think the Civil Rights Act of 1964 is an important historical event. But perhaps most tellingly, CBS News found that 84% of whites and 83% of blacks believed that the act had made life better for blacks in the United States, while only 2% thought it had made life worse. These statistics serve to reaffirm the legacy of the Civil Rights Act of 1964. Far from forgotten or relegated to the history books, the act is remembered for the hope and change it brought to a country gripped by racial tensions.