50 Years After the Summer of Love 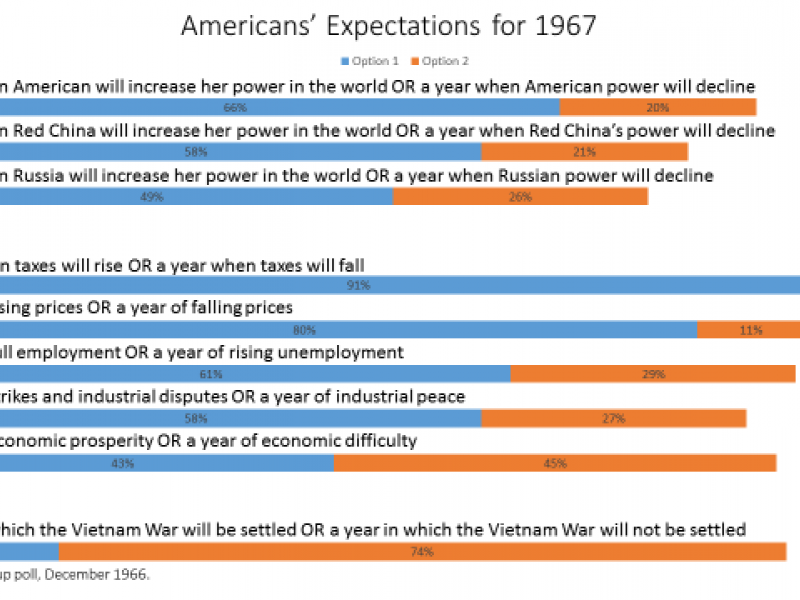 Fifty years later, the summer of 1967—the Summer of Love, of hippies and be-ins, the Long Hot Summer of protests and riots—still stands in the popular imagination as a turning point. The social changes that had been building over the previous decade finally exploded, leaving the country forever changed. Looking back at public opinion data from the preceding years, the upheaval of 1967 almost seems inevitable. Attitudes were shifting, and polls increasingly asked questions about sex, protest, and the war, as well as continuing to focus on the racial problems facing the country.

Yet in December of 1966, Gallup asked Americans about their expectations for the coming year, the poll focused not on flower children, recreational drugs, civil rights, or changing sexual mores, but on the perennial issues of policy wonks: economics and foreign affairs. The answers reveal a mixed bag of confidence and anxiety. While on the positive side, most Americans expected full employment and rising American power in the world, a majority also expected the year to bring industrial disputes, rising prices, rising taxes, and, above all, ongoing war in Vietnam.

The war was at the top of Americans’ minds throughout 1967. Vietnam was consistently the top answer when Americans were asked the most important problem facing the country—except once, at the peak of the urban unrest in August, when Vietnam was effectively tied with racial tensions as most important.

Over the next few weeks, in commemoration of the fiftieth anniversary of the Summer of Love, the Roper Center will use the data archive to explore these issues and more. We’ll investigate changing attitudes toward premarital sex, responses to rioting in American cities, and public perceptions of the draft. We’ll highlight datasets that allow researchers to better understand the problems of 1967 at home and abroad. And we’ll offer a glimpse at the lighter side of iPOLL, with American opinions on miniskirts, long hair, and rock and roll.