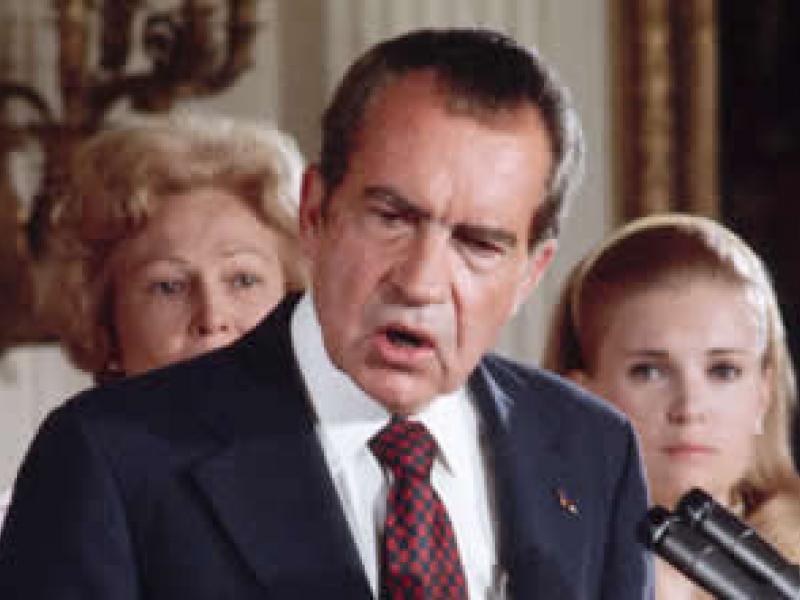 On August 9, 1974, plagued by the Watergate scandal and the threat of impeachment, Richard Nixon resigned from the highest office in the United States, the only President to do so in the history of the country. Just a few days before he stepped down, a Gallup poll had shown Nixon's approval rating to be a dismal 24%, down from 67% in January of the previous year. The 37th President left the White House under a dark cloud of public disapprobation. But by his death in 1994, many claimed the man had successfully reinvented himself as a respected elder of American politics. The passage of time can certainly shift perceptions of public figures, as the events that shaped attitudes move from breaking news to history. The extensive archives at the Roper Center for Public Opinion Research at Cornell University offer public opinion data that illuminate not only how Nixon and other presidents have been perceived during their time in political life, but also how the American people view their former leaders in retrospect.

Nixon enjoyed fairly strong approval ratings in the first years of his presidency, and despite some drop-off, typical of that experienced by most presidents, he regained enough support in 1972 to win a landslide reelection victory, garnering 60.67% of the popular vote and winning every state except Massachusetts. In the spring of 1974, as the news slowly broke about the Watergate break-in, cover-up, and White House involvement in the affair, Nixon's approval ratings began a steady decline. In the last Gallup poll before the resignation, disapproval of the President ran highest among Democrats (78%), but Independents were nearly as negative at 69%, and even among Republicans, nearly four in ten (38%) disapproved. Upon his death in 1994, Richard Nixon had, according to some, thrown off the mantel of his disgrace and recreated himself as a respected statesman. Tom Wicker in a 1994 New York Times article summed up the perspective of many in the pundit class when he wrote that Nixon at his death "had won his way painfully back from the Watergate scandal that had driven him from the White House in 1974 to a relatively respected position as elder statesman, political analyst, author and commentator." However, the Roper Center's polling archive tells a different tale of Nixon's standing with the American people. The first time after his resignation that the public were asked their approval of the job Nixon had done as president was in a 1988 NBC News/Wall Street Journal poll, which found 38% of Americans approved and 47% disapproved, a substantial improvement from his last ratings in office. His approval and disapproval ratings never came so close again. While his approval ratings dropped slightly over the years to reach 31% in 2013, his disapproval ratings increased to the mid-60s by 2006 and have stayed there ever since. When compared to the upwards trajectories of Clinton's and Reagan's approval ratings in their post-Presidential years, Nixon's rehabilitation seems meager at best.

The Public and Watergate

The public's attitude about the Watergate scandal is somewhat mixed. Over four in ten Americans in Gallup and AP polls since 1982 have said that Watergate was "just politics, the sort of thing that both parties do," while about half have said it was "very serious matter because it revealed corruption in the Nixon administration." However, a full three-quarters of the public said in a 1982 Gallup poll that Nixon's actions regarding Watergate were significant enough to warrant his resignation. This number dropped as low as 58% in a 1997 AP poll, and had climbed back to 63% when ABC asked the question in 2002.

But Was He the Worst in the Public's Eye?

Though the people may not give Nixon high approval ratings, there are signs that time does dull the sting of scandal. When the public was asked by Gallup whom they considered the worst president since WWII, the highest numbers chose Nixon in 1986, 1999, and 2000. But when Quinnipiac asked the same question in 2006, GW Bush had knocked Nixon down to the second slot. In 2014 Obama took the lead, with GW Bush in second and Nixon a distant third. Not surprisingly, these crowns of dishonor are bestowed differently by the two political parties. Sixty-three percent of Republicans chose Obama in the 2014 Quinnipiac poll, while Nixon tied for second with George W. Bush at 5%. Over half (54%) of Democrats chose George W. Bush, but Nixon still drew a substantial 20%.