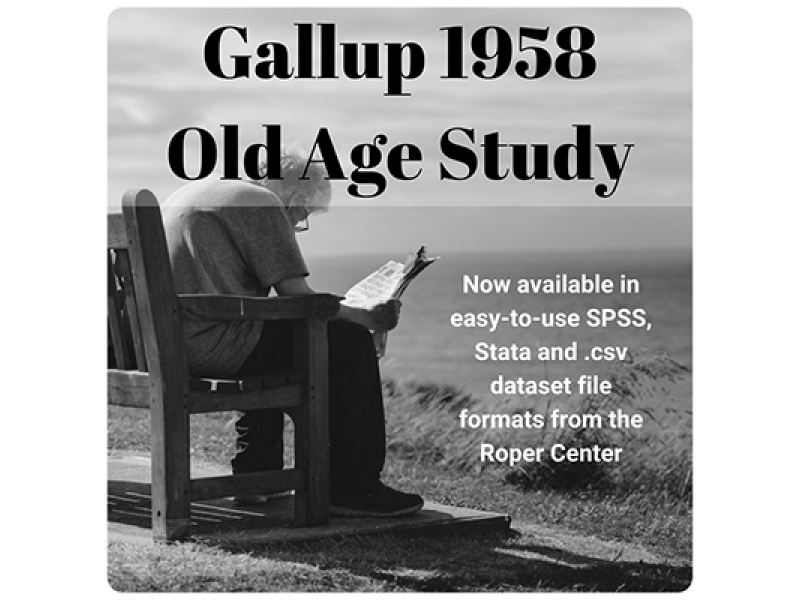 Studies of people of extreme old age – centenarians and their comparatively youthful 90-something counterparts – have become common only in recent decades, as the number of people of exceptional longevity has increased dramatically. Research on these individuals has focused on their health and health-related behaviors and has been conducted primarily by gerontologists. But in 1958, the Gallup polling firm conducted one of the earliest studies of this population, an extensive survey of 402 people who reported their age as 95 or older.

This survey, available from the Roper Center, is unique not only in its sample population but in the depth and breadth of the topics covered, resulting in a dataset with over 1,400 variables.

Roughly two-thirds of the questions are devoted to health issues.  Respondents provided medical histories, giving information about the longevity and causes of death of family members and their own histories of surgeries, illnesses, and medication use. Health lifestyle questions, including sleep, eating, and drinking, smoking, and exercise habits, are particularly detailed.

For example, respondents were asked about the frequency of consumption of a broad range of foods, how these foods were usually prepared, their food preferences, and whether their consumption changed over their lifetime. The answers, and even the questions, reveal the different dietary habits of an earlier period when rutabaga and dandelions were mentioned as favorite vegetables, and 34% reported having eaten bacon “nearly every day.”

But the survey instrument covers topics far beyond health. The researchers were interested in all aspects of life, including work history, finances, household labor, hobbies and pastimes, and politics. Subjects ranged from the mundane to the profound. What was the biggest change you had to adjust to after retirement? What do you think was the happiest period of your life? Do you think you would have been happier if you had gone further in school? If you had had more money? What magazines do you read regularly? How do you explain your living to be such an advanced age? Do you think that the world is a better place in which to live now than it was when you were young?

A running theme of the study is happiness and satisfaction.

Respondents were asked if their home life had been peaceful and quiet, if they frequently whistled or sang to themselves, if they considered themselves lighthearted. A strong majority of 84% said they were “usually satisfied with things”, while just 15% said they were “frequently upset with how things went.”  Most were also satisfied with their occupational lives, with 74% saying they would do the same work if they could live their lives over again.

Respondents were also asked about the experience of life in old age. Would you say that you are more or less interested in world affairs today than you were when you were 50? Do you have time to do all the things you would like to do? Do you go to the movies? What are your chief interests now? If you could have three wishes, what would they be?

Some of the most interesting questions in the survey are those that tap the historical perspective of a long lifetime. For example, respondents were asked the most important inventions or discoveries “since you were a youngster.”  The largest proportion of respondents (24%) said electricity, while 21% said airplanes, 20% automobiles, and 19% television.  Atomic and rocket research didn’t impress as many; just 2% mentioned those items as greatest inventions.

Respondents were also asked about their first memory of a national event; a plurality of 22% said the Civil War.

Most data-centered research focuses on the big picture and the aggregated numbers, but the revelations in this dataset are often in the human details. Responses to open-ended questions reveal thumbnail sketches of life stories all the more vivid for their abbreviated nature.

“How would you say your troubles and worries were different from those of most people you have known?;” “Fatherless son to raise.” “All my children died young.” “Lost all my money.”

“Why would you choose to live a period of your life over?;” “Loved my husband and he loved me.”

This hidden gem of the Roper collection has undergone enhanced data curation and is now available in easy-to-use SPSS, Stata and .csv dataset file formats.

What is the first national event you can recall?

Do you happen to remember exactly where you were or what you were doing the moment you heard the news about the September 11th terrorist attacks? All in all, what would you say is the single most important event that occurred in this century – that is, since the year 1900?  Do you remember watching the first manned landing on the moon on T.V. at about the time it happened?

Over the years, polling has used many questions to illuminate the intersection between personal memories and the national events that have affected Americans’ lives.

Some public opinion researchers have delved deep into this relationship. In his 2015 book Generations and Collective Memory, written with Amy Corning of the University of Michigan, 2017 Mitofsky Award winner Howard Schuman examined how generations share formative memories of major national and international events. The primary question used in this work for analysis is the “standard events question” that asks respondents to name one or two national events and world changes from “about 1930 to today” that seemed “especially important.” From generational differences in responses, the authors investigate the validity of a number of ideas about collective memory, including the critical year’s hypothesis, which holds that major events that occur during a person’s lifetime from the age of ten to thirty years will be regarded as more important than other events.

Although unfortunately the standard events question was not asked in the Gallup 1958 Old Age Survey, respondents were asked about their memories of a national event. The form of the question was one now more popular as an internet meme than a polling question: what was the first major national event you can recall?  Among this sample of people aged 95 and older, a plurality of 22% said the Civil War, which had ended ninety-three years prior.

As Corning and Schuman found in their analysis of memories of the Kennedy assassination, the impact of some events can stay with even those people who were young children when the event occurred, if the emotional effect on the adults in their lives was powerful enough.

Other responses to this question about first national memory in the Gallup survey included “the boys coming home from WWI,” “the Yankees marching into Richmond,” and the election of Garfield.

The earliest event mentioned? The election of Lincoln, 97 years prior to the survey, mentioned by seven respondents. The thrill that seeing these answers gives today’s researchers speaks to the fascination that individual’s memories of national events held as a subject, as well as the unique value of the perspective of centenarians and near-centenarians captured by this study.