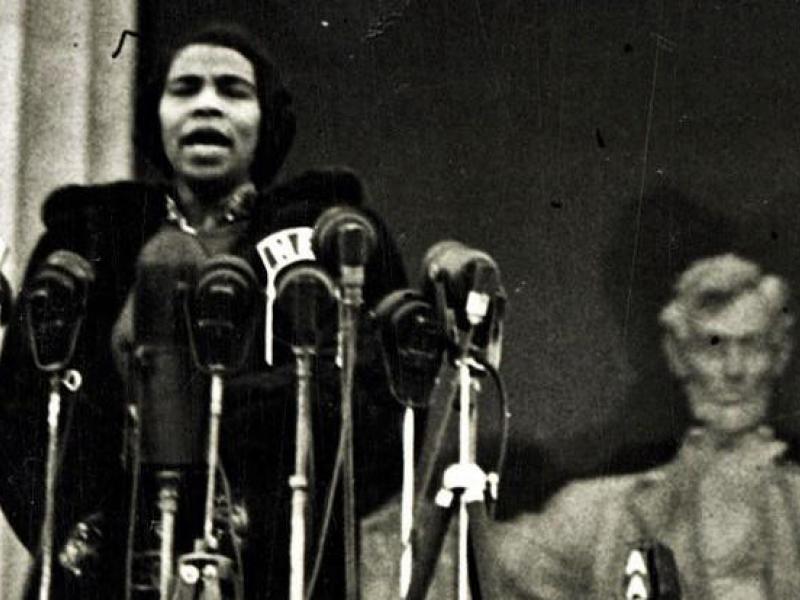 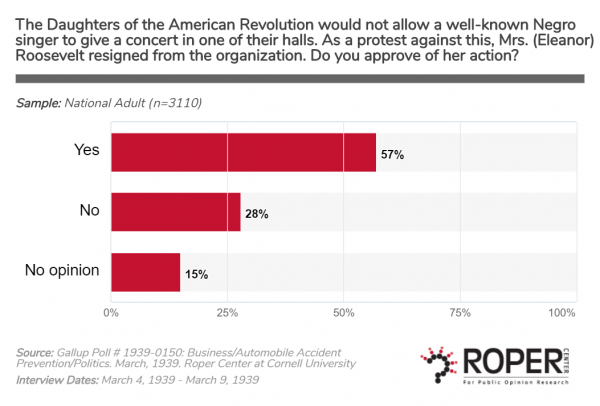 Eleanor Roosevelt and the DAR

The Daughters of the American Revolution would not allow a well-known Negro singer to give a concert in one of their halls. As a protest against this, Mrs. (Eleanor) Roosevelt resigned from the organization. Do you approve of her action? Explore the entire Gallup Poll # 1939-0150: Business/Automobile Accident Prevention/Politics. 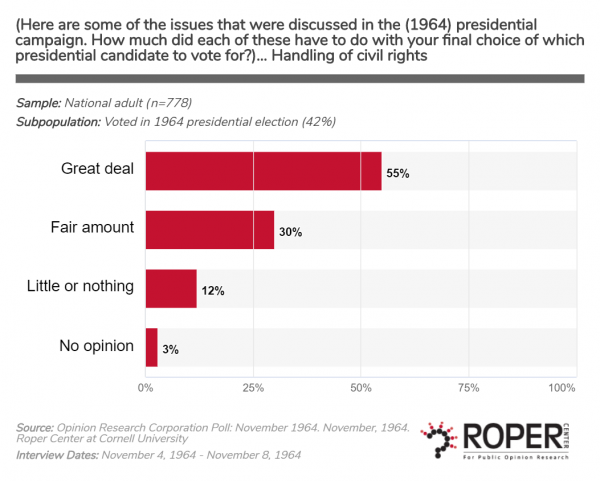 Here are some of the issues that were discussed in the (1964) presidential campaign. How much did handling of civil rights have to do with your final choice of which presidential candidate to vote for? Explore the entire Opinion Research Corporation Poll: November 1964.

The Roper Center’s iPoll database makes it possible to put current attitudes in a historical context. A topic search on Black/African Americans yields over 10,000 results that specifically reference the Black population.

Questions on equality and justice that may be of particular interest to those studying race relations in America can be found under a range of topics, including Equality, Courts, Economics, and Terrorism. The topic of terrorism includes questions back to the 1930s on public support for a proposed federal anti-lynching law, which despite strong public support from the earliest years has still not been passed. These topline results are primarily from polls of the general public or registered voters/likely voters, although there are some studies of exclusively Black Americans. (See the Researching Black American Public Opinion section.)

The earliest question in the Black/African American topic (NORC Survey # 1944-0225: Attitudes Toward Negroes) asked about Eleanor Roosevelt’s decision to resign from the Daughters of the American Revolution (DAR) in protest over their treatment of Marion Anderson.  Other early questions asked national samples about their perception of the treatment of Black Americans, housing and educational issues, and job opportunities. Early questions, from the 1930s-1960s, also addressed racist beliefs directly, asking respondents if Black Americans were as intelligent as whites or if their blood was different from white blood. While these questions are extremely uncomfortable to read, as the attempt to measure racism also normalized racist ideology, this data provide an important record of how widespread particular racist ideas have been in the United States.

Through the period of desegregation, polls probed the willingness of Americans to attend integrated schools, live in integrated neighborhoods, marry outside their race, or work alongside people of a different race. Large visible protests brought questions about Civil Rights leaders like Martin Luther King (e.g. NORC Poll: Amalgam Study # 160), sympathy for protesters or police, the response of government, the role of particular institutions, and ratings of the president’s handling of race relations, protests, and school integration. The American National Election Studies, fielded since 1948, also included some questions on desegregation and Civil Rights leaders starting in the sixties, with some question series fielded for multiple years. In addition to national samples, state-level polls included questions on these topics, particularly the Minnesota Poll.

After the events of 1968, two major polls investigated the complex relationship of attitudes about race and violence, including police brutality and the role of violent protest. These extensive polls – the 1968 Harris Poll on Violence and the 1967 Lemberg Center 6-City Study on Violence - represent a central resource on Americans’ attitudes in the late 1960s.

The number of polls on racial issues has grown each decade since the 1960s, and questions about integration, perceptions of discrimination against Black Americans, and ratings of presidential handling of race have remained staples. Perhaps the single most valuable survey for tracking trends in racial attitudes is the General Social Survey, launched in 1972 and fielded every two years. Questions about causes of Black poverty, favorability toward interracial marriage in the respondent’s family, government spending on Black communities and other topics have been repeated across decades, allowing researchers to trace changes over time.

Beyond ongoing questions about broad issues, polling has delved into perceptions of police treatment of Black Americans when events bring these issues into the headlines – most notably after the videotape of Los Angeles police officers beating Rodney King in 1991 and their acquittal the following year, but also during the O.J. Simpson trial. In 2014, after the shooting of Michael Brown by a police officer in Ferguson, Missouri, pollsters returned to the questions they had fielded in 1992, allowing researchers to make comparisons of attitudes. Some questions about the Black Lives Matter movement that was born after the murder of Trayvon Martin and grew after Ferguson continued to be asked between 2014 and 2020. The series of videotaped killings of Black people in 2020 has returned pollsters’ attention to these issues. The newest studies on these topics can be found in the Current Polling section.

(National adult polls with both searchable questions and datasets available unless noted.)

1967 Minnesota Tribune polls of Minnesotans June and August (Datasets only)

Work Trends Poll: A Workplace Divided--How Americans View Discrimination and Race on the Job 2001, employed adults or unemployed and looking for work