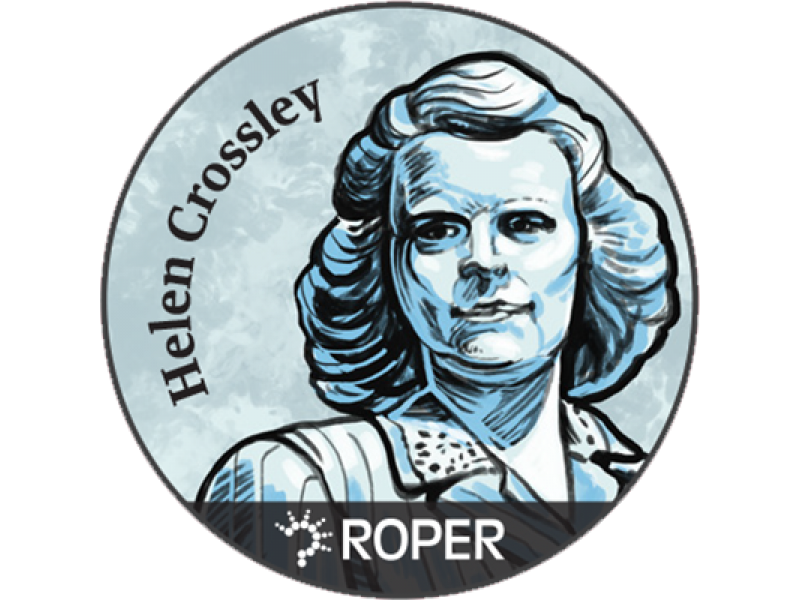 Following her graduation from Radcliffe College, Helen Crossley worked for the Office of War Information and the War Food Administration in Washington during World War II. After the war, she spent two years performing media and political surveys at Crossley Inc., the commercial research firm established by her father, polling pioneer Archibald Crossley. Helen then went on to the University of Denver, where in 1948 she received an M.A. from the Opinion Research Center, an affiliate of NORC.

In the early 1950s, Crossley worked in Germany for the Armed Forces Information and Education Division (AFIED), ending her time there as chief of its research branch. In 1955 she began her long tenure with the U.S. Information Agency (USIA), where she worked with Leo P. Crespi to establish coordinated research surveys in Europe, Asia and Latin America. These surveys measured foreign populations’ awareness of attitudes toward U.S. policies and culture, earning a reputation as the so-called “Ear of America.”

After a two-year evaluation assignment with the aid program in Korea, Crossley became a freelance consultant who served academic, commercial and government clients. She also returned to work at her father’s firm, now known as ArchCross Associates, and collaborated (through Political Surveys and Analyses, Inc.) on several surveys for Governor Nelson Rockefeller and other political figures. In 1979, Crossley returned to USIA, where she helped to ensure that USIA survey data would be released for public use through the Roper Center and the National Archives. After 32 years of government service, she retired in 1992 with the Agency’s Career Achievement Award.

Crossley was a founding member of both the American and World Associations for Public Opinion Research (AAPOR and WAPOR). She served as the first female president of WAPOR between 1960 and 1962 and held various other offices in both organizations. She was Secretary-Treasurer of AAPOR and twice served as president of its Washington chapter. She was also active in the National Council for Public Polls (NCPP) and was a regular member of the International Society for Political Psychology and the D.C. Sociological Society. Her special research interests included finding ways in which survey research could contribute to conflict resolution by bringing people closer together.

Crossley received a citation from the Korean Ministry of Information for helping to establish opinion research in Korea, as well as a similar acknowledgement from the National Safety Council for research on seat belt usage. She was co-author, with Don Cahalan and Ira Cisin, of the landmark American Drinking Practices (Rutgers, 1970) survey and various journal articles. She was listed in the first edition of Marquis Who’s Who of American Women in 1958.

Read our tribute to her life and work.

Helen Crossley, a pioneer in the field of public opinion research and a longtime friend of the Roper Center, has died at the age of 95.

Crossley, daughter of polling innovator Archibald Crossley, was a graduate of Radcliffe College and received a master’s degree from the University of Denver. As a graduate student, she worked with Don Cahalan in the Opinion Research Center on the influential Denver Community Survey. In her early career, she worked for the Armed Forces Information and Education Division, then moved to the U.S. Information Agency (USIA), where she led survey research around the world that informed U.S. diplomatic efforts. She also worked for ArchCross Associates and as a consultant, providing polling for clients including Nelson Rockefeller.

Crossley was devoted to the promotion of public opinion research and provided essential leadership to the developing polling industry. She was a founding member of AAPOR  and served as the first female president of WAPOR. She established the Crossley Center for Public Opinion Research at the University of Denver and provided funding for graduate coursework and fellowships there.

The Roper Center, which Crossley supported throughout her life, will always be grateful for her efforts to ensure that polls conducted by USIA would be preserved at the Center for future generations of researchers. Crossley also cataloged her father’s papers and donated them to the Pioneers in Survey Research collection at the University of Connecticut’s Thomas J. Dodd Research Center archive. In 2008, Crossley received the Roper Center’s Distinguished Service Award for conducting and archiving international survey research.