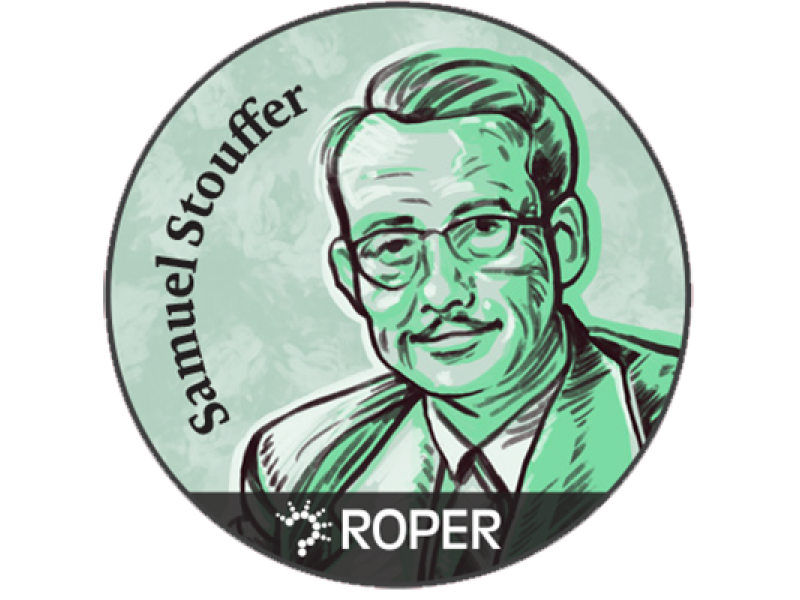 Samuel Stouffer (1900-1960) was an American sociologist and a pioneer of survey research techniques.

A native of Sac City, Iowa, Stouffer received a Bachelor of Arts from Morningside College in 1921 before going on to get a Master’s Degree in English from Harvard in 1923. Upon graduation, Stouffer returned home to be the editor of his father’s newspaper, The Sac Sun, until it was sold in 1926. Stouffer used this opportunity to get his Ph.D. in Sociology from the University of Chicago in 1930. It was during this time that he became heavily influenced by social science pioneers L.L. Thurstone and William Ogburn. Stouffer’s quantitative skills were strengthened during a postdoctoral year at the University of London under Karl Pearson and R.A. Fisher. After returning to the United States, Stouffer became a professor at the University of Wisconsin, and later at the University of Chicago. During his time at the University of Wisconsin, Stouffer took a leave of absence to fill an opening on the Central Statistics Board in Washington. His work showed that, as a result of the Great Depression, there were 750,000 fewer marriages than normal resulting in an estimated population loss of one million. In 1938, he was a named a delegate to the International Population Conference in Paris. During the late 1930s, he worked on opinion and mass communication research with fellow public opinion pioneer Paul Lazarsfeld.

At the outset of World War Two, Stouffer left the confines of academia to lead an innovative research group for the War Department. Under Stouffer’s leadership, his team carried out several extensive studies, among which are the famous American Soldier surveys. On this project, Stouffer and his team surveyed over 500,000 American GIs during the war using a combination of in-person interviews and questionnaires to gauge soldiers’ opinions on a broad range of issues, including feelings on racial integration in the armed forces, assessment of performance of officers, rating of medical conditions for the wounded, and preferences for leisure time and recreation. These studies led to the War Department making several policy changes to better meet the needs of our soldiers.

Following the end of the war, Stouffer returned to Harvard to establish the Laboratory of Social Relations in 1946. He continued to pursue his passion for contemporary public opinion through analytical research. In the summer of 1954, Stouffer and a team of 500 interviewers polled 6,000 Americans on nonconformist behavior and determined that tolerance for nonconformist behavior differed by socioeconomic levels. In 1958, he was appointed to the Faculty Committee for the Joint Center of Urban Studies for Harvard and Massachusetts Institute of Technology. Shortly before his death, Stouffer worked as a consultant for the U.S. Bureau of the Census and the Population Council in New York.

The American Soldier Surveys are part of the Roper Center data collection.