Then and Now: First Ladies

There are few roles in American politics that are as visible and yet as nebulous as that of First Lady. Attempts to define and measure that role go back to the dawn of modern polling, with Gallup finding in December 1938 that two of every three Americans approved of “the way Mrs. Roosevelt has conducted herself as ‘First Lady’.” Eleanor Roosevelt’s extremely active role in policy and publicity was a first for the President’s spouse, of course [or at least since Dolly Madison, but accurate polling data on her is not easily obtainable].

Her primary efforts were in the area of civil rights, most famously in a dispute with the Daughters of the American Revolution over a performance by singer Marian Anderson. She was also instrumental in the birth of the UN Commission on Human Rights. The current First Lady is usually at or near the top of lists of “most admired women” in any administration, but her longevity on them is unparalleled. When asked what woman living or dead they most admired, 6% said Eleanor Roosevelt in 2000, seven and a half decades after she left office and over five since her death. 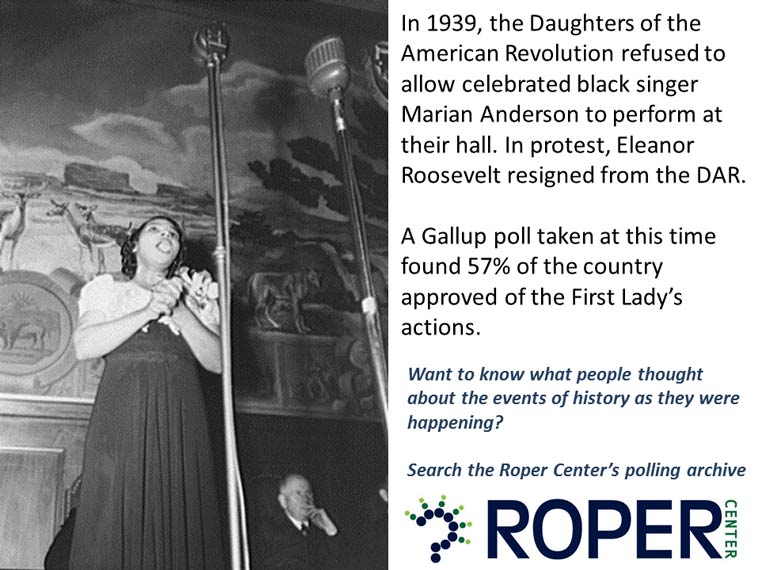 Her immediate successors were more traditional in their approach to the job of First Lady, which is reflected in a lack of data. There are no questions about Bess Truman during her time in the White House, and only one asking if it was appropriate to call Mrs. Eisenhower “Mamie” (Americans were split 40%-44% on that crucial issue). Interestingly, there are no job ratings for the most iconic First Lady, Jacqueline Kennedy. The youth of her children meant that her main public role was mother of the First Family, along with a growing influence as an international style icon. Her popularity was immediate and immense, with the first query in the summer of 1961 finding a 66% favorable rating and only 12% unfavorable. Jackie’s fashion status is reflected in the data, being the only First Lady to have her hairstyle be the subject of polling – 67% of those who had heard of it liked the “Jackie Kennedy Look”, and 7% of women had considered getting theirs styled similarly. Opinions were split about her marriage to Aristotle Onassis in 1968, with 35% approving, 31% disapproving, and 34% not sure. Her overall popularity, however, remained undimmed. In 1981, 26% said she was their favorite of the First Ladies since 1960. In 2013, 51% rated her favorably, with only 2% unfavorable, 13% undecided, and 30% not having heard enough to say. In the same survey, 24% said she had played a major role in helping the nation to heal after her husband’s assassination, 18% a minor one. The next time pollsters asked Americans to rate the job done by a First Lady was in 1969, when Gallup found 54% approved of the job Pat Nixon was doing as First Lady, 6% disapproved, and 40% had no opinion. The question was asked twice about Betty Ford, in 1975 and 1976. Her rating moved from 50% positive and 36% negative to 71% positive and 24% negative. Her public support for women’s rights and pro-choice stance made her highly visible and quite popular, part of an ongoing phenomenon of President’s wives being substantially better-liked than their husbands. The next First Lady, Rosalyn Carter, had 68% positive ratings and 21% negative in 1977 and 59%/19% in 1979—while her husband’s dropped from 63% positive to 32% in the same span. The Arab oil embargo and Iranian hostage crises may have made Jimmy Carter among the most unpopular presidents of the polling era, but Rosalyn was largely unaffected. 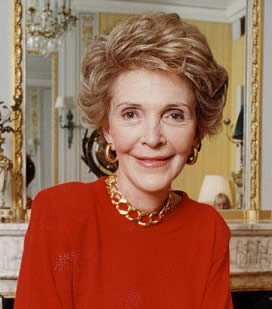 Nancy Reagan’s progress was an interesting one, starting at a 57%/26% split after her initial year as First Lady but rising to 71%/14% in 1985 amid the excitement of her husband’s landslide reelection. Outside of bringing more formal style to the White House after the relaxed, populist approach of the Carter years, her main cause was the “Just Say No” anti-drug campaign, which she first supported during her husband’s 1980 campaign. While there is no direct polling about her involvement, it is reasonable to assume that part of her popularity came from these efforts. Her major episode of bad publicity followed revelations that she had used input from an astrologer to help plan the President’s schedule [which only 16% approved of, versus 66% who did not] and that she had what some officials considered an excessive influence on policy. Like her husband, Nancy’s popularity dipped following the disclosure of the Iran-Contra in 1986, bottoming out at 53%/31% in early 1988.

Barbara Bush’s main efforts as First Lady centered on literacy programs, but in contrast to her predecessor she took a much less active public role. There is thus much less polling data about her job performance. Two-thirds rated it as excellent/pretty good and 28% only fair/poor in her first year, and 77% excellent/good and 20% only fair/poor in her final. She would of course return to public attention as the mother of the 43rd president, but there are no performance ratings for that role. 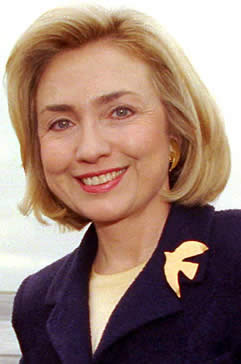 Bush’s successor as First Lady would not lack for polling data. Hillary Clinton had the largest public policy role of any First Lady since Eleanor Roosevelt, and her approval ratings reflected the ups and downs of political fortune and opinion. Her initial rating as First Lady was 67%/16%. Alone among presidents’ spouses she had a rating on a specific issue, national health insurance. In the fall of 1993 60% approved of how she was handling health care policy, and 29% did not. While the efforts to establish a national insurance system did not bear fruit, it gave her a level of public visibility matched by few other First Ladies. Her job rating slowly declined over her husband’s first term to around 50%, and then in early 1996 she received the only-ever overall disapproval rating for a First Lady, 42%/47%. Scandals concerning investments from before her husband’s presidency and firings in the White House kept her ratings around 50-50 for some time, but over the next two years the rating rose back into the high 60s and even broke 70%. With Bill Clinton’s involvement in the Monica Lewinsky scandal she became a more sympathetic figure, and a January 1998 Gallup Poll gave her an 80% approval rating. Her last rating in office was 74%/21% in January 2001. Laura Bush took a much less political role, and consequently had an uninterrupted run of highly favorable job ratings, peaking at 85% in 2005. Her main efforts were uncontroversial support for education, literacy, and women’s health. While George W. Bush’s term was marked by war and political division, her largely non-partisan activities kept her above the fray and maintained her popularity. In the same survey that put her at 85%/8%, her husband’s numbers were 52%/44%. Her final rating came two years before the end of her husband’s second term at 76%/18%. Michelle Obama inherited the same partisan national atmosphere that marked the Bush years, but, like her predecessor, has managed to stay mostly out of political conflicts. She has focused on issues relating to health, particularly childhood obesity and planting an organic garden on the White House lawn, and like Jackie Kennedy before her has become an influential style icon as well. Her opening rating was 79%/8% in April 2009, and most recently 68%/28% in April 2014.

The larger question behind these numbers is whether or not the public thinks that First Ladies should have an important role in policy and politics, a debate that Hillary Clinton’s involvement brought to the fore. In 1992 58% of registered voters favored “having a First Lady who is involved in the President’s policy decisions and the day-to-day operations of the White House staff”, while 35% opposed. Faced with the reality of Clinton’s involvement in the administration, 1996 opinion about the appropriateness of her role split 47% for and 48% against. The last question about the First Lady’s role was in 2004, when 62% said she should be involved in politics and 32% said should stay out.

Being the President’s spouse is a unique job, and while styles have varied over time the constants are involvement in important causes and raising awareness for the administration’s policy initiatives. Americans are theoretically supportive of the First Lady having influence on policy, but the lesson of Hillary’s Clinton’s tenure is that this is no protection from partisan crossfire once a president’s spouse makes a policy stand. Work as a spokesperson to bring attention to  a non-controversial issue generally wins public approval. Such efforts are usually the driving force behind First Ladies having a higher approval rating than their presidents have. If in 2016 we have the first “First Gentlemen” in the White House, we will have the opportunity to see if same rules apply for men in this role. Bill Clinton’s approval ratings are currently higher than his wife’s, so perhaps the effect will indeed work in reverse. At any rate, we will eventually have the answer to that question, if not in 2016, then sometime beyond.

Carl Brown has been with the Roper Center since 1999, and currently collects and prepares new polls for entry into the iPOLL system and selects poll questions for our daily Twitter and Facebook feeds.   He has a BA in Modern European history and an MA in American history from the University of Connecticut.