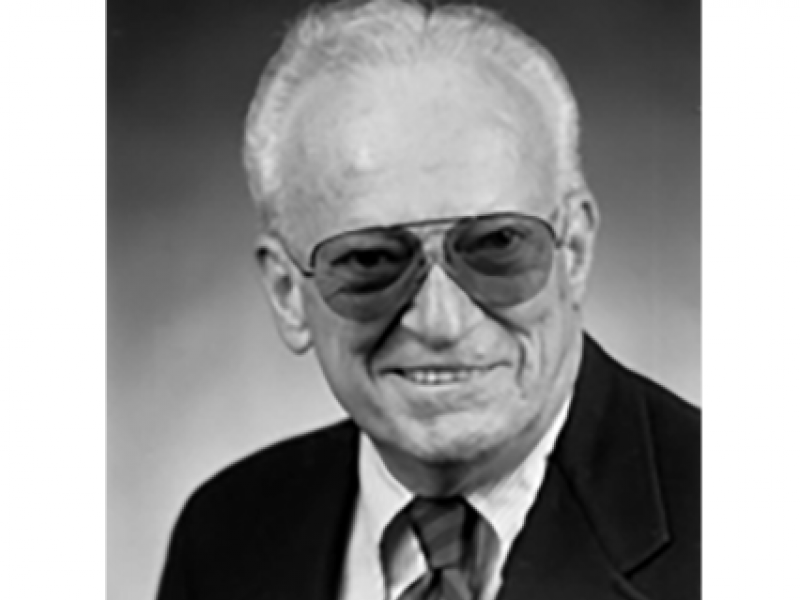 Burns “Bud” Roper (1925-2003) was an influential figure in the areas of market research and public opinion polling. Born in Iowa on 26 February 1925, he was the elder son of public opinion pioneer Elmo Roper. During World War II Bud Roper was a B-17 pilot in the Army Air Corps, flying 35 missions over Germany as a pilot or co-pilot, including a dramatic flight on 12 September 1944 in which he and the pilot managed to land their aircraft with only one operational engine.

Bud's father Elmo Roper co-founded one of the first market research firms in 1933, was director of the Fortune Survey — the first national poll based on scientific sampling techniques — from 1935 until 1950, and his correct prediction of the 1936 Franklin Roosevelt landslide over Alf Landon helped establish scientific polling as a viable industry. While Burns considered careers as a labor leader and architect after the war, he eventually decided to follow in his father’s footsteps and became an important member of the Roper polling organization.

Elmo and Bud Roper played a key part in the organization’s decision to confront the failures of the 1948 Presidential election when pollsters failed to predict Truman’s historic comeback win over Dewey. In the debate over how to present their failure to their audience, the Ropers argued from the start that admitting their mistakes and pledging to discover the reasons why the polls had been so wrong after their success in 1936, 1940, and 1944 was the only way to regain the trust of the public and business alike. The company apologized for its error and supported the creation of an investigative committee of industry experts, which determined that pollsters had assumed Dewey’s lead was insurmountable and had stopped asking questions too early to catch the late shift for Truman. This forthright approach was instrumental in restoring the industry’s reputation after an initial period of scorn. Bud Roper also developed the question that has become one of the standards in measuring the mood of the nation, “Are things generally going in the right direction, or have they seriously gotten off on the wrong track?”

The Roper family continued to play an important role in the development of the Center. Elder son Bud Roper had begun working with The Roper Organization in the 1940s, then ran the business for decades. Bud provided critical direction and support for the growing Roper Center for Public Opinion Research archive and also taught graduate classes in public opinion research at the University of Connecticut. Bud Roper succeeded his father as head of the company after Elmo’s retirement and remained on its board until his own retirement in 1994. He was also chair of the Roper Center's Board of Directors until the end of his life, helping to oversee the world’s largest archives of public opinion data that his father founded after World War II. Roper also served as president of the American Association for Public Opinion Research in 1982-83, and he received the AAPOR Award, the organization’s highest honor, in 1988. Receiving the AAPOR Exceptionally Distinguished Achievement Award, presenter Eleanor Singer said he was "an institution-builder and worthy son of a founding father[;] he has provided steady leadership to The Roper Organization and fostered the evolution of The Roper Center for Public Opinion Research as a leading repository of historical public opinion data."

In 1992 he was involved in the organization’s response to a controversial poll about the Holocaust done for the American Jewish Committee when a poorly-worded question produced an aberrantly-high result for those believing that the Holocaust had never happened. Much like his father’s approach to the problems in 1948, Roper admitted the error and re-fielded the survey at the company’s expense, resulting in an answer more in line with other questions about the issue. He made a presentation at the 1994 AAPOR meeting over the client’s reservations and received a standing ovation from his peers for his honesty and commitment to resolving the problem.

Read a tribute to Bud Roper from Public Perspective.