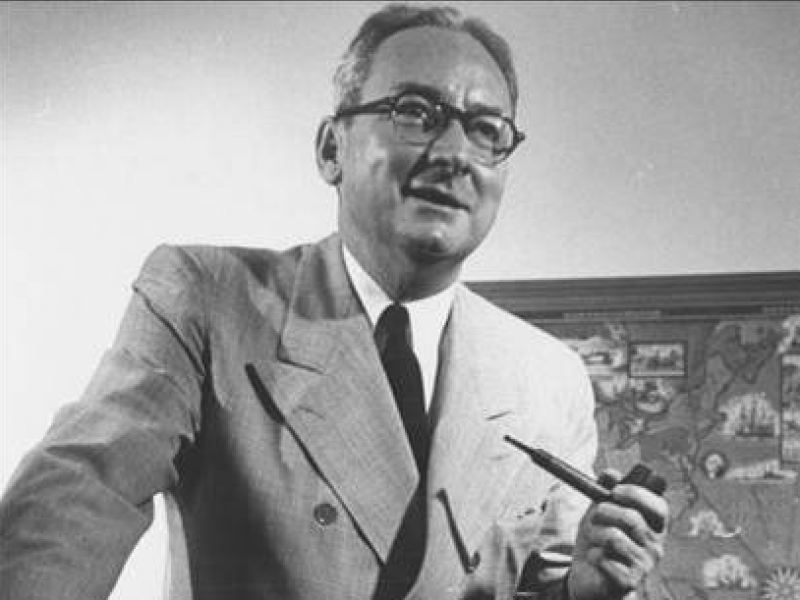 Elmo Roper (1900-1971) was a pioneer in the fields of market research and public opinion polling. Born in Nebraska on 31 July 1900, he operated a jewelry store with his brother in Iowa in the 1920s. While not successful, the experience taught him the value of understanding what his customers wanted. He did his first customer research while employed by the Traub Company in the early 1930s, trying to find out why their products were not selling better, and in 1933 he co-founded one of the first market research firms, Cherington, Wood, and Roper.

Roper was director of the Fortune Survey, the first national poll based on scientific sampling techniques, from 1935 until 1950, and his correct prediction of the 1936 Franklin Roosevelt landslide over Alf Landon helped establish scientific polling as a viable industry. This was demonstrated in 1940 when FDR asked his organization and George Gallup’s to do polling on the proposed Lend-Lease deal to send destroyers to England in order to gauge public support before going ahead.

During World War II, Roper was hired by “Wild Bill” Donovan to be deputy director of the Office of Strategic Services, in charge of finding the best men to staff the new intelligence agency. Roper helped convince George Marshall and Dwight Eisenhower of the importance of opinion research in the armed forces, overcoming opposition from others, and helped Donovan go to outside channels to ensure that security at American industrial plants was sufficiently strong. He then became a “dollar-a-year” man for the Office of War Information, the Office of Production Management, the Army and the Navy. His company also did work for the government, surveying the general public in order to set wartime production goals as well as prioritize the transition back to a peacetime economy.

Following the 1948 election, when the polls’ spectacular failure to predict Harry Truman’s comeback victory over Thomas Dewey caused the public opinion industry’s greatest crisis, Roper led the public and private defense of polling, withstanding the scorn of comedians and politicians to call for a measured look at what had gone wrong and why. Behind the scenes his reassurance of his commercial clients (and the strength of his reputation) helped prevent market research from being damaged too greatly by the failure of the polls. While it would take some time for public confidence to return, polling managed to survive in part because of Roper’s calls for calm and reason, and his frank admission of errors where they had occurred.

Roper was an editor-at-large for the Saturday Review, a founding member of the Connecticut Civil Rights Commission, a syndicated newspaper and radio columnist, and in his later years would be a perennial election and convention analyst on network television. A tireless activist for liberal causes, he was head of the fundraising arm of the Urban League right after the war and served on the boards of the Fund for the Republic, as well as more than two dozen other groups and corporations, from Planned Parenthood and the Children’s Television Workshop to Tiffany’s and Spiegel.

Roper was especially interested in the concept of Atlantic Union, which advocated greater political, economic, and military unity among the United States and western Europe to counterbalance the threat from the Soviet Union and the Warsaw Pact nations. He was a member of the US Citizen’s Commission on NATO and an important delegate to a convention in Paris that discussed the idea of Atlantic Union in 1962. Although he never finished college, Roper was the recipient of honorary degrees from Williams College, the University of Louisville, and the University of Minnesota, and was in constant demand as a speaker for the last thirty years of his life.

In 1947 Roper founded the Roper Center for Public Opinion Research at Williams College, the first social science data archives. To establish the basis for the Center’s collection, Roper convinced fellow pioneers George Gallup and Archibald Crossley to send their data to the Center as well, with the idea of assembling the kind of breadth and depth of data necessary for scholars and policymakers to make informed and responsible use of public opinion information. Now located at Cornell University, the Roper Center is the world’s largest repository of polling data, with collections spanning the globe and dating back to the 1930s.

Roper married Dorothy Shaw in the 1920s, and they had two sons, Burns and James. Burns was also an influential member of the opinion research community, succeeding his father as head of Roper Research Associates following Elmo’s retirement. Roper died in 1971 in Redding, CT.

The Roper/Fortune collection is part of the Roper Center archive.